How Do You Screen Record on Android

If you don't want to use something fancy, you can also choose to use the in-built recorder in the Android system. This feature doesn't come with many of the advanced features you will find on third-party apps, but it will do, especially when you don't need a recording that is too elaborate. Let's take a look at all the options you have when you need to record the screen on your Android device, starting with the native solution.

How to Record with Android Built-in Recorder

The screen recording feature is available with new versions of Android, starting with Android 10. The feature was later disabled but Samsung and LG device owners can still be able to find it. It is a useful way to quickly record what is happening on your Android device. Before you can use this feature however, you will need to enable it in the device's settings.

If you have access to it, here's how you can use it to record the screen on your Android device; 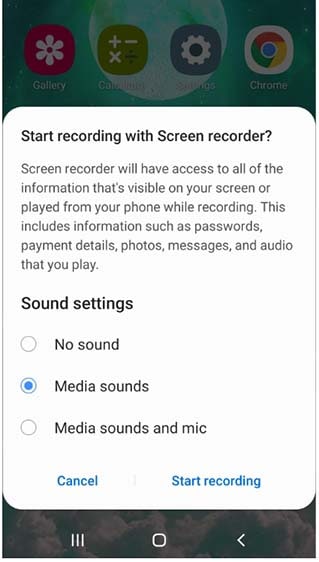 Step 1: Swipe down the notification bar on your device to access the Quick Settings section.

Step 3: Tap on the "Start" button to start the recording. You should then see a countdown clock appear on your screen. You may need to allow for special permissions to continue with the recording and some apps on your device; particularly those with copyrighted content such as Netflix and YouTube may not record.

Step 4: Once you are happy with the recording, tap "Stop" to end the process and save the video.

How to Edit Recording on Android

Once the recording is complete, the videos will be available in the default camera roll folder on your device, which is often Google Photos for most Android devices. Follow these simple steps to find and edit the videos;

Step 1: Open Google Photos on your device and tap on "Photos" at the bottom of the screen. You should see the recording in the "Today" section

Step 2: Open the screen recording in Google Photos and then tap on the "Edit" icon at the bottom of the screen. It will be between the "Share" and "Trash" icons.

Step 3: Drag the bar on the left of the timeline to the right. This will trim away the start of the video. Find the spot where you want the video to begin, and repeat the process on the right side to trim the end of the video.

Step 4: Once you're done with the recording, tap "Save a Copy" and you'll have both the original version and the edited version of the screen recording.

How to Record Screen on Android with Screen Recorder

If you would like more options and additional ways to create a more professional recording, try the following Android screen recorders;

The AZ Screen recorder is one of the best screen recorder apps for Android. Downloaded and used by more than 1 million users, this app is easy to operate, doesn't require you to root your device and it doesn't impose any limits in the recorded video at all. You can record videos in very high resolution, HD and even full HD and there will be no watermark on the recorded video once you are done.

To is the AZ Screen Recorder to record the screen on your Android device, follow these simple steps;

Step 1: Install the app on your device

Ensure that you grant the app all the necessary permissions it requires in order to function properly.

When installation of the app is complete, launch it from the app drawer.

You should immediately see an overlay with 4 prominent buttons on it. Tap on the gear icon to open the settings. Here, you can configure the video recording settings as you prefer. Some of the settings that you can change include the resolution of the video, the frame rate and the bit rate that you would like to use.

Once you are happy with the settings you have, press the back button to go back to the app's main window.

Now open the app that you would le to record and when you're ready to begin recording, tap on the "Red" record button in the AZ overlay.

The recording will begin immediately and you can continue using your device as normal while AZ records your activities in the background.

You can then tap on the image icon in the AZ overlay to view the recorded video which will be saved in the device's photos app.

You may know Google Play Games as the default home for all the games on your device. But most people remain unaware that in addition to offering you the best gaming experience, Google Play Games also has some very useful screen recording features. These screen recoding features are designed to help you record the games on your screen, but they will just as easily allow you to record other apps and activities on your device. 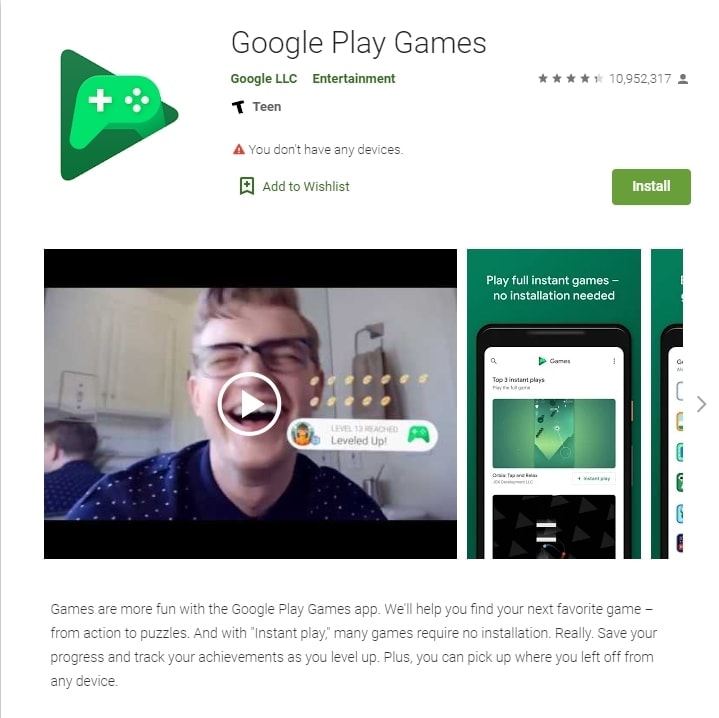 Google Play Games may not give you as many features as AZ Screen recorder, but it is a simple solution, particularly for gameplay recording. Here's how to use it;

Step 1: Open the Play Games app on your device and choose the game that you want to play and record.

Step 2: At the top, select the "Record Gameplay" icon

Step 3: Choose the video quality that you want to use and then tap "Next."

Step 4: Tap "Launch" and you should see a floating bubble appear with all the recording settings that you can customize as desired.

Step 5: Tap "Start Recording" and after a 3-second countdown, the recording will begin.

Step 6: To end the recording, drag the floating bubble to the center of the screen and over the "Close" icon.

Does Android Have a Screen Recorder?

The Android screen recorder that we have talked about above was introduced in the beta version of Android 10. As such only devices that updated to Android 10 were able to get this feature. But then it was discontinued when the official version of Android 10 was released. But it did remain active and accessible in some LG and Samsung devices. Therefore, if you can't find this feature on your device, either the device is not running Android 10 or it is not an LG or Samsung device.

How do I record my screen on Samsung?

Depending on the version of Android and the model of Samsung you have, you might be able to use the built-in Android screen recording feature to record the screen. Otherwise, we recommend choosing a third-party app like AZ Screen Recorder to record the screen as it will provide you with a lot of features designed to facilitate a smooth and seamless recording process.

How do I Record the Screen on Android 11?

The Android 11 update brought a lot of new features to Android devices. One of them was the improved version of the Android 10 screen recording feature. You can therefore use this simple solution to record the screen on your device. But it worth noting that this feature may not be available on all Android devices. When it first came out, it was available on Samsung devices but Google and Motorola devices didn't seem to have it. Check in the "Quick Settings" if the feature is available for your device.