How to Record FaceTime Video Calls

How to Record FaceTime on Mac

There are a number of ways through which you can record FaceTime video calls. If you want to use a Mac, there are different applications that would serve the purpose. Wondeshare DemoCreator is one of the easiest video editing software. It is trendy and allows you to ignite your story, irrespective of your skill level.

Wondershare DemoCreator has a free recording feature that you can use to record FaceTime video calls. The software has versatile features that will allow you to record and edit your video and also add special effects. Once you are done, you can share your final video through social media or other mobile devices.

B. Steps to Record FaceTime with DemoCreator

In order to use DemoCreator, you would need to download the program on your Mac and then follow these steps:

Step 1. Launch the program on your Mac and then choose to Create New Movie

Step 2. Find the camcorder icon, usually above the timeline and left click on it. This will grant you access to screen recording.

Step 3. The next step is customizing the recording area, which is done by choosing from the full screen and the window pop ups. Turn on recording from microphone and computer audio system.

Step 4. Click on the record button to start recording a FaceTime video call.

Step 5. Once you are done, click on stop recording and the recorded file will automatically be saved in the media library.

How to Record FaceTime on iOS Device

A. Best Tools to Use

There are a number of tools that can be used to record FaceTime on iOS devices. Some of them main options include Vidyo and Airshou.

You can plug in a microphone or any multi-channel device to complete the recording. ScreenFlow also allows you to edit your video and add effects in the form of music, animations, text, images and transitions. The final production will be a professional podcast, which you can export in MOV, M4V, MP4 or animated GIF formats.

Step 1. You should start by downloading and installing the ScreenFlow app on your computer. 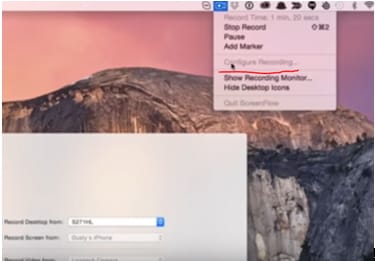 Step 3. Ensure that your iOS device is connected to your Mac.

Step 4. Click new recording, on the option on record from, select the iOS device and then click on the red button to start recording. 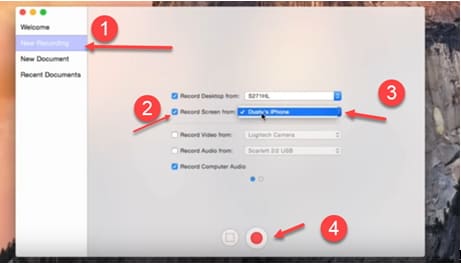 Recording FaceTime video calls is quite interesting, and there are 3 main ways through which you can achieve this. Here are the options available for you:

These are some of the main ways that can be used to record FaceTime video calls. All of the options are effective, what you would need to do is find the one that serves your needs in the best way possible. Most of the apps and tools are free to use and have versatile features.