How to Record Video on Snapchat

In this technological era, social media is a big thing, which influences many aspects of our life. We have seen apps such as WhatsApp, Facebook, Twitter, Snapchat, etc. to see large growth over these years. We have made these platforms a big part of our life by sharing our everyday life with others through them. Snapchat is one such big social media platform where people share their ideas, new happenings, and pretty much anything they find interesting to upload. Here, you have the option to upload your photos or videos or even create different animations.

You can do it with different filters, which has made this app very popular not just among the youth but among kids too. However, here, you must have noticed that while you record video on Snapchat app version, you have to hold the shutter button. As soon as you lift your hands off the button, your recording stops. Also, here is the main issue that arises i.e., how can one opt for "Snapchat record video" without holding the button. Well, here goes the solution:

With the new update in Snapchat, you will be able to create videos through the hands-free option. The new function of the Snapchat app allows the user to create a maximum of 6 videos, which could be of a maximum of 10 seconds each. So, in this way, the user will be able to record a video of 60 seconds in total at a time. One of the main reasons why Snapchat is so famous is because of these cool videos and images that one can make with the filters.

First of all, you must understand that this new feature for Snapchat can only be used if you have an updated version of the app. Now for updating your Snapchat application on your android device, you first need to go to the play store, and under your apps and games section, you have to find the Snapchat app.

At first, you can just go and search Snapchat in the app store. Then there will be one update button readily available. You have to click on that button, and the update will be done within some time, depending upon your network speed.

Then after your app has been updated, you have to open the app and go to a new section where you usually create your new videos.

Then, click on the video section and then tap on the record button present there. Now, normally this would require you to hold the record button. But with this update, there will be a "lock" button just beside the record option. You have to drag to the left to make it work.

As soon as you start recording, this icon will appear at the bottom of the screen. For android users, the button will be on the left side of the screen.

So apparently, you can just tap on the lock button after finding it with another finger, or you can slide that record button to the left until you merge it with the lock button. This seems complicated, but when you practically do this, you won't face any issue. So, at this time, your recording will start, and you can now remove your hand without any problem. So, this solves the issue of you holding on to the record button.

Now, you may notice that the recording automatically stops when the timer hits 10 seconds. So, you have to repeat the process for other parts of the videos as long as you want.

First, go to your app store and under your apps and games section, try to find out the Snapchat application. You can also do the same by going to the search option where you have to put the keyword Snapchat, and it will show you the app in the store.

Now you have to scroll down to the bottom of the page where it says "Become a beta tester". You have to click on that, and you will be taken to a browser page where you need to accept the terms and conditions.

After you accept them all, it will ask you to verify your apple id, and when you confirm it through the page, it will say that you have become a beta tester successfully. This is a crucial step since you will be joining the beta testers.

{Note: Sometimes, when the beta program is full, you won't be able to do that, and it will say, "Currently beta program is full". In this case, you have to wait for some time and then try the same process after some days. Almost every week, beta versions for iOS are available, and all the testers are cycled out of the test flight. The apple hardware tools and Snapchat's fast feedback system makes it a rapid system for new updates. So, beta testers are constantly updated with new features from the developers.}

So, after you have completed the beta tester process, you need to go to your app store and update the Snapchat app. When the update is completed, the app store will install it automatically. Then you need to open the app and go to the create section where you create new images and videos.

Then you have to tap on the record button, and then when you hold it, the recording will start. Earlier for recording the video, you had to hold it all the way through. But with the new update, you will see a lock icon at the right of the record button at the bottom of the screen.

You have to drag the button there, and now you can record everything hands-free. 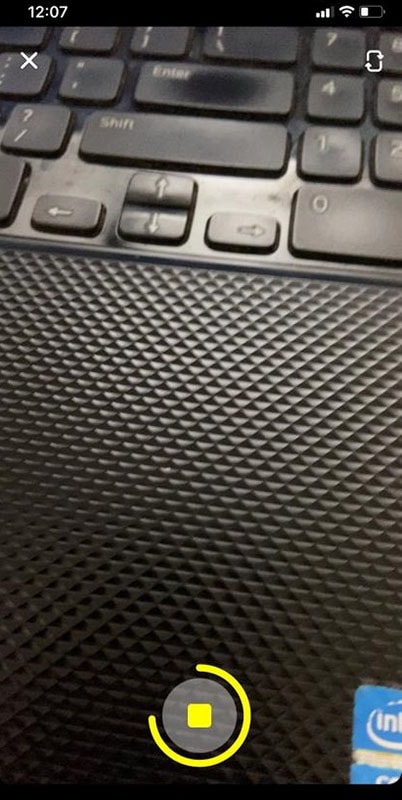 After you are done with your recording, you can tap the stop button to stop recording.

Above-discussed are a few of those best options, which you can try out for Snapchat screen recording without holding to the shutter button. These methods have been tested out, and they certainly work in most of the devices. If you are a big fan of Snapchat and want to explore more things, this is a good start. This is because you don't have to worry about holding the record button until your creative video is done. With these additions, you can focus on your video creativity rather than worrying about the recording part itself, which will help you make more of such awesome videos.