Windows Media Player or WMP is an in-built audio and video recorder for Windows systems.

If you wish to know how you can record windows media player then keep following the post as we present to you two distinct methods to record via WMP and other recording software that won't turn you off! With these recording tools mentioned below, you can record your favourite gameplay videos and share them amongst your peers and followers.

Windows 10 is equipped with an in-built recorder to record PC games. Using this in-built tool, you can record special moments and game footage to be shared on social media platforms such as Youtube and Facebook. To enable this feature, you need to work with Game Bar, which is a part of Game DVR by Xbox app. Along with the same, Windows 10 also provides customizable keyboard shortcuts for screen capturing and video recordings.

The below-given steps will guide you on how can you record screen windows media player:

Step 1: To record any gameplay with the Game Bar, press Windows+G keys and then hit on the recording button in red color. After this, a timer will be shown at the top right of your screen, which implies that the recording is on.

Step 2: If you want to stop recording, again open the game bar and press the red stop button. You can begin or stop recording at any point using Windows+Alt+R keys. In case, you want to hide or show the timer, hit on the Windows+Alt+T keys. These default keyboard shortcuts can be changed from the Xbox app. 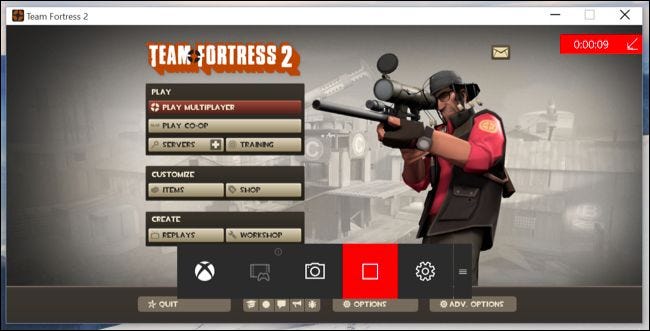 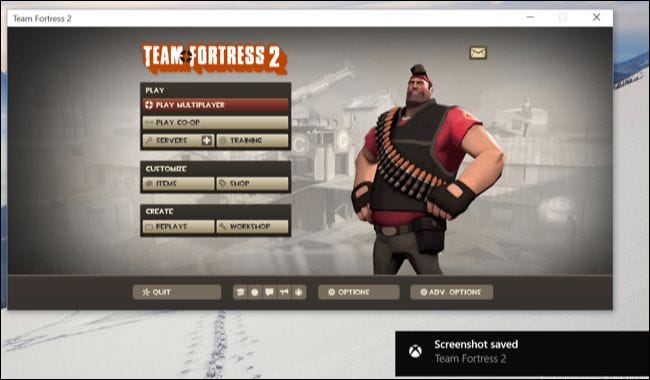 When you take any screenshots or record anything, Windows saves it all to your user account at the Videos\Captures folder. All the videos get saved in .mp4 format while the screenshots are saved in .png. Each of these saves files are tagged with the game name, date and time of capturing.

These videos and screenshots can additionally be accessed via Xbox app. For the same, you need to launch the app by going to the Start menu and then select the Game DVR option at the top left side of the screen. After this, you will see a list of all the videos and screenshots below the “On this PC” section, which can be watched from your Xbox app anytime. 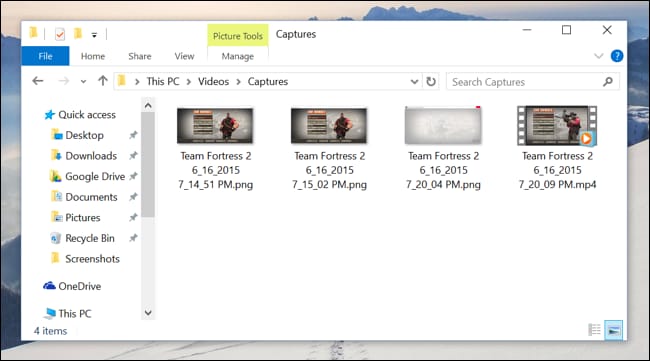 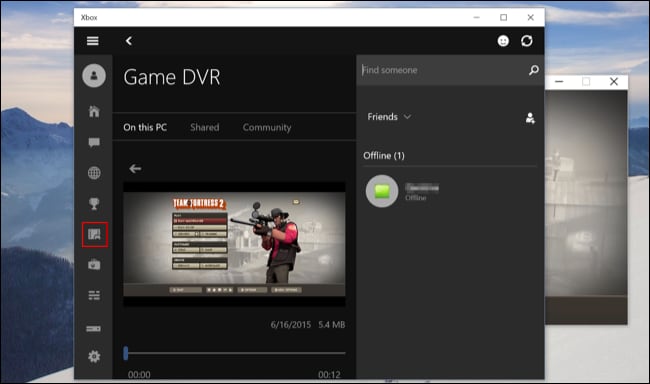 The settings of Game Bar and Game DVR can be configured from the Xbox app itself by following the below steps.

Step 1: Launch the Xbox application and go to the Settings icon.

Step 2: Now, click on the Game DVR option to customize. You can either completely disable the Game DVR or set keyboard shortcuts to open the game bar and then take screenshots, record videos, toggle timer and so on. 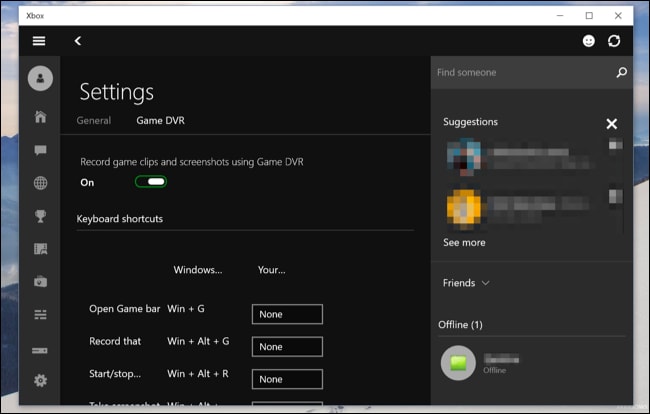 There also exist options to select the folders with Windows 10 saved game clips and screenshots. From here, you can choose quality and resolution settings as well. Your audio is saved by default while recording gameplay, you can choose not to record audio or control audio quality level from the Game Bar.

The game DVR option lets you record gameplays. To enable this feature, you need to activate the “Record in the background while I’m playing a game” option located under the Game DVR settings in your Xbox app.

When you enable this option and your Xbox app prompts “this may affect game performance”, it means that the system resources will be continuously used to record the gameplay using the select settings. Therefore, you can think about keeping this option active if you are keen to record gameplay or else if you have a powerful PC that can space additional resources for the same. This feature will start recording by default while lasting for about 30 seconds. If you wish to save these last 30 seconds, follow the below steps.

Step 1: Launch the Game Bar and select the second icon from the left side of your screen. You can also press Windows+Alt+G keys.

Step 2: Now, this “Record that” feature will be active and automatically save the last recorded part of your game.

Note: The Game DVR is only for video capturing. If you want to share the recording on social platforms, you will need third party game recording software to do so. 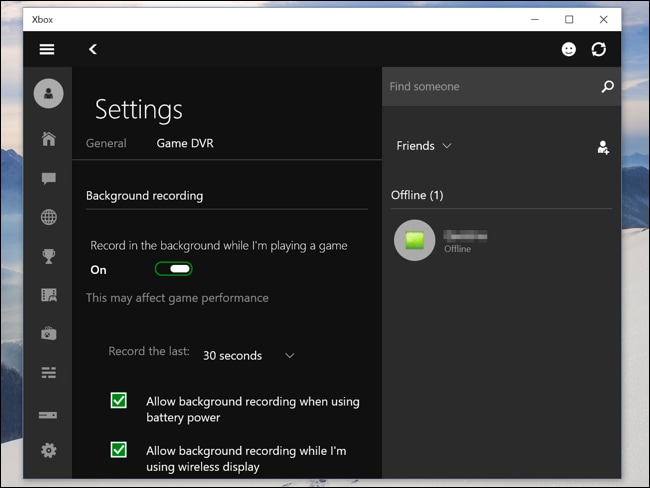 There are many software that comes specifically for screen recordings. But, we recommend using only

due to its simple and user-friendly interface and extreme capability to record screens for gameplay, podcast etc. this screen recording software can be availed for free and works flawlessly with Mac and Windows OS.

Besides screen recording, this tool can also be used for video and photo editing while providing an option to record webcam windows media player. DemoCreator features many professional tools and lets you share your videos with others. With this tool, you can also highlight specific areas of the screen to provide a better picture to those who follow your recordings or are trying to learn some skills and tricks from your gameplay recordings.

Step 1: Once you have downloaded and installed DemoCreator on your computer, launch it.

Step 2: Now, you will see a small window popped up on your screen, select the Capture option from there. 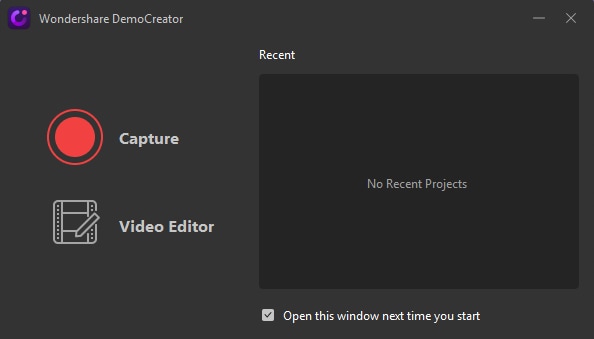 Step 3: After clicking on Capture, again a pop-up window will appear, from here, you can adjust the screen size. Besides, there will be three options to choose from, you can select any size as per your needs.

You can manually adjust the size by simply inputting the desired values while also selecting the recording devices you wish to use.

Step 4: You can switch on and off your webcam, mic and microphone during recording. When you select a webcam, it will let you record using an in-built camera or webcam attached to your computer device. For voice recording, you can either go for a microphone or mic or both.

Step 5: Now that you have selected the desired recording area, you can begin screen recording. To stop the recording at any point, press on F10 and to pause recording press F9, using the same key i.e. F9 you can resume recording.

Step 6: After you have stopped the recording process, you will be taken to the editor window automatically. Here you can perform editing using features like crop, text, add pictures, add titles and subtitles etc to make your video more attractive. 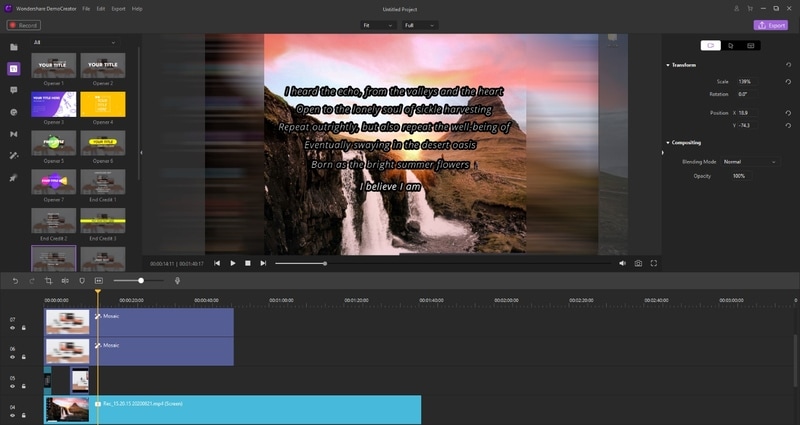 There are many ways to record gameplays such as using Windows in-built tools or with third-party software. The above given two methods explain the detailed steps to perform gameplay recording using Windows Media Player and Wondershare’s DemoCreator. You can choose any of the above-given methods to record gameplays with sound, but we recommend using DemoCreator for all your gameplay recording needs due to its interactive interface and impressive effects.