How to Add Around Mouse Effects with Ease

You will need your venture to have more to it than simply content on slides. If all you planned to incorporate was content on slides, you would approve of utilizing PowerPoint to make a show. All things being equal, you need to make an eLearning example of course, and you need something other than content on a slide. You need apparatuses that empower you to direct and show your watchers. In this article, we will examine a portion of those devices, for example, mouse impacts, pointer ways, and feature buttons. Once in a while, it's useful to incorporate the mouse pointer, just as the mouse click sound, to additional help you in this regard. This is particularly obvious in case you're making a show of a product program or application since it assists with directing the watchers along.

Part1: The Importance of Round Cursor Effects

Cursor effects are utilized to improve the cursor for better perceivability utilizing a feature, spotlight, magnifier, rings, click sounds, and the sky is the limit from there. Now and then the client simply needs a cursor impact for a couple of moments, maybe the client's need to feature a minuscule check confine the edge of the screen or some tiny text or possibly a little symbol or something to that effect yet clients would prefer not to utilize the impact for the whole video, they simply need it for a couple of moments that is the place where cursor impacts became an integral factor.

Part2: How to Record a Certain Cursor Area Precisely

Out of the numerous enriched features of DemoCreator, the Cursor effects make it an extraordinary useful toolkit for the teachers and other users to prefer it as the best screen recorder and video editor. Wondershare DemoCreator is a wise choice for you to opt if you’re looking for a cursor effect editor which also gives you the tendency to customize the effects to the fullest.  In case you're one of those people who continually prefer to disclose to individuals via web-based media or in other online conditions how to do certain things, then, at that point, Wondershare DemoCreator is an instrument you'll without a doubt need. Wondershare DemoCreator is an application worth getting in case you're attempting to make simple-to-follow instructional exercises and need to make a general proficient feel for your recordings.

This slick platform will assist you with catching precisely whatever it is you're doing on your screen and go about as a guide in disclosing how to do it. As well as aiding you record, the application likewise includes a coordinated altering mode for upgrading or remedying numerous parts of your recorded material. Here are some required steps if you want to apply some cursor impacts with the DemoCreator video editor.

Before we dive into the Wondershare DemoCreator cursor effects feature, you need to download and install this software into your system which is as easy as we’ve brought you the downloadable link to do so. Follow the below link and install it on your system right away.

After you’ve downloaded and installed the DemoCreator, open it up with full ease and follow the next step to perform the cursor effect on your recordings.

Now, as you’ve probably launched the application, is the time to go for a New Recording and it’ll open up the recorded window as shown here: 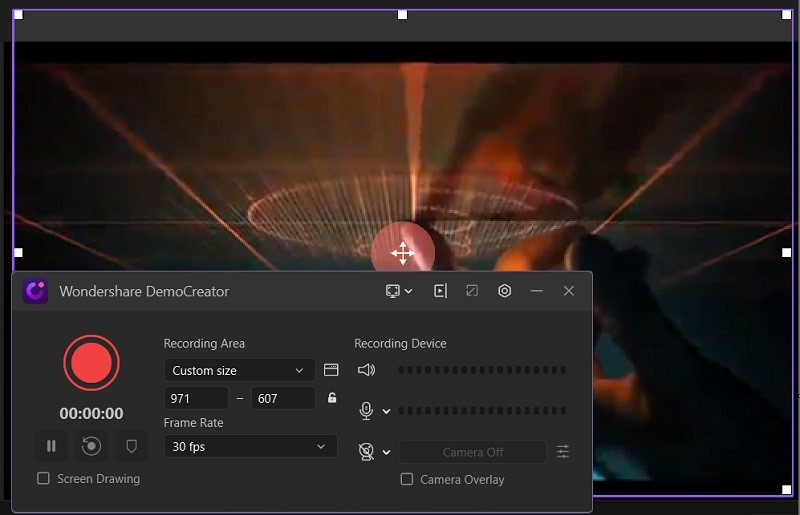 You need to customize the screen and after that, start the recording that’ll begin right away.

In the next step, when you’re done with the recording, hit the Stop button and it’ll bring you into the Video Editor of DemoCreator that’s the built-in functionality of this software where you can perform a variety of video editing tasks on the go. To begin with, drag your recorded content to the timeline below as shown here: 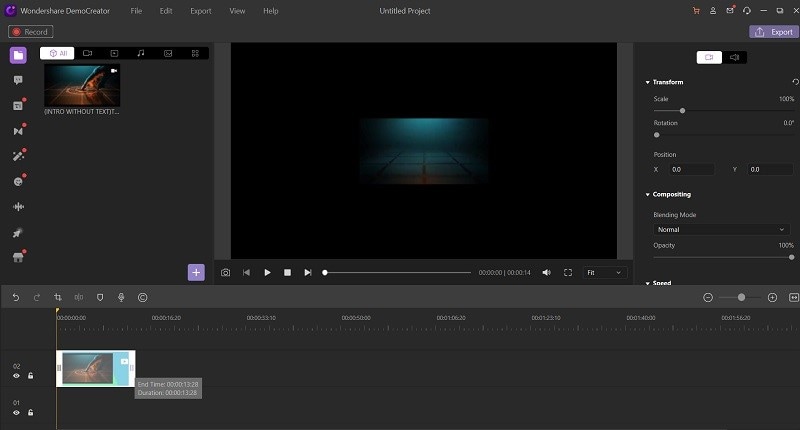 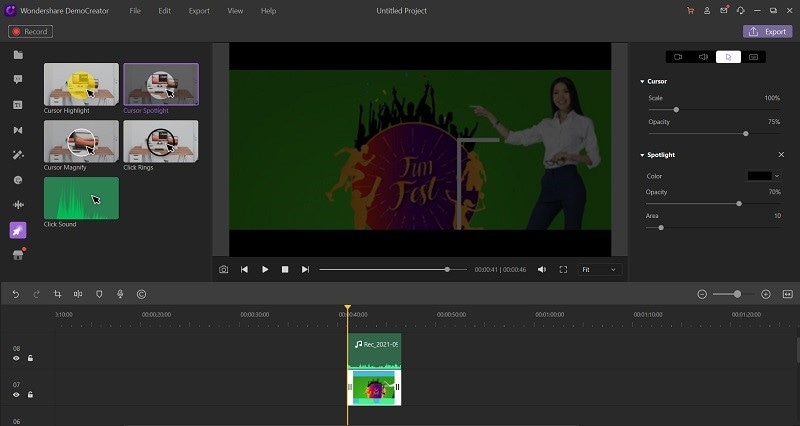 Cursor Highlight: Cursor Highlight is the effect in which your cursor gets highlighted to the full extent. It’s a vital tool for lecture recordings that brings a special focus on the specified line or slide content during recording. 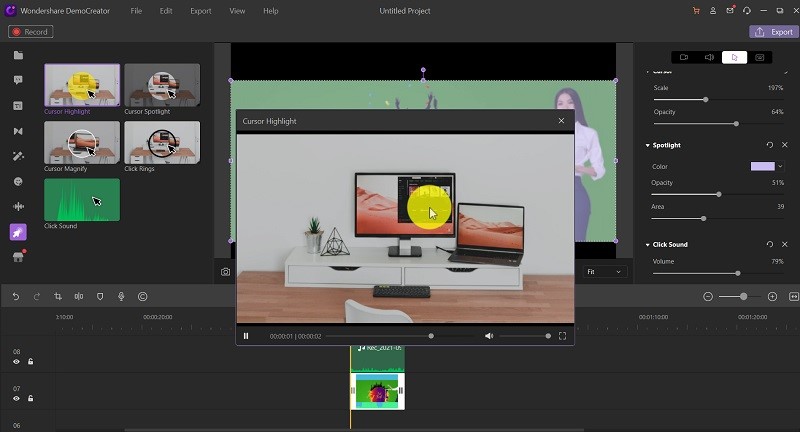 Cursor Spotlight: Cursor Spotlight enlightens the cursor round-about whenever you introduce this effect to the recording. If emphasizes the given content with the spotlight around your cursor and with that, you’ll be able to bring a special focus on the specific area of your recording screen. 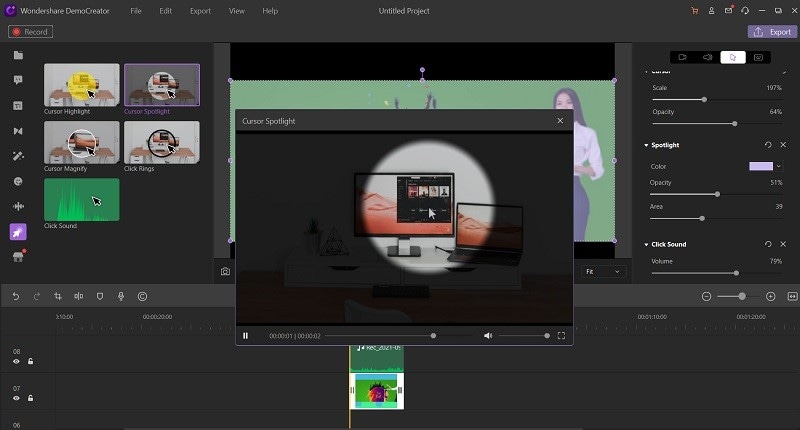 Cursor Magnify: Cursor Magnify is the Zoom-in ability around your cursor. It brings the special focus with a Zoom to the cursor movement. 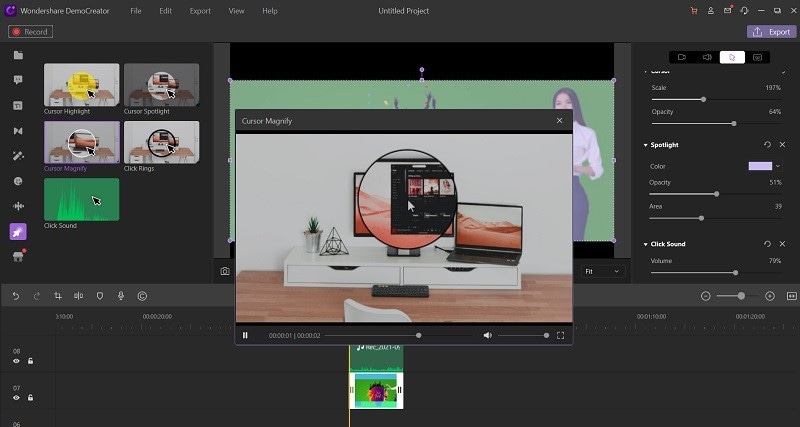 With that being said, now you know that the cursor effects that DemoCreator has all are round in shape that’ll help your cursor recordings put special focus on certain things inside your recordings. These effects are all around your cursor movement and follow the same during the recording.

Lastly, when you’re done with editing the recording content, you can preview it inside the Preview window and check out if the effects are being added or not. when we record the screen in DemoCreator, it records the cursor close by the video. We would then be able to alter the cursor. You might think that it is valuable to add impacts to the cursor to make it more recognizable. On occasion, you might wish to conceal the cursor. You can likewise add audio effects that are connected to the snap of our mouse. On the off chance that You at any point need to cause to notice the cursor, you can vitalize it. For instance, you could briefly broaden it when You are going to play out a significant activity. 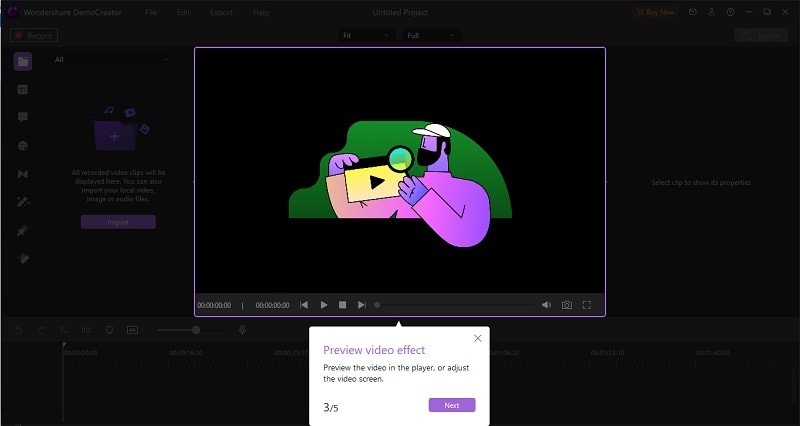 Furthermore, if you want to draw the focus of your audience in your lesson videos, Wondershare DemoCreator allows you to emphasize your mouse cursor while doing the screen recordings. This feature lets; your viewers see the explanation details in a better and understandable way. This software detects the mouse movement intelligently and applies your selected Cursor effect on the mouse cursor movement efficiently. The above guide best explains doing so.

With the assistance of cursor impacts client's ready to cause the viewers to notice on-screen activities successfully, this element is particularly valuable in case client's creating video instructional exercise/telling individuals the best way to accomplish something on your PC screen since it permits your watchers to track with what you're doing and focus on where you're clicking/pointing. Wondershare DemoCreator is a notable and useful tool in this modern era that can create professional video lessons with a clear and intuitive interface. The software is made solely for creating an engaging and stunning explanatory video for learning through the usage of a screen recording window which can be shared with the audience after the final pro-level touch by its built-in video editor.