How to Screen Record on OPPO Reno6/Reno5

The screen recording is the new hype these days. People use the screen recorders to explain a process to someone or upload a video tutorial to YouTube.

The educational and corporate sector also records the video conference to have access to essential details afterward. The article reflects upon OPPO screen recorder and introduces three popular screen recorders for OPPO phones.

Part 1: How to Record Screen on OPPO Smartphones?

The first concern that comes into mind is how to screen record on OPPO. The users of OPPO smartphones enhanced multifold over the last ten years. It is primarily because of the features and traits that OPPO brings to the table.

At the moment, most businesses are operating online. There are online classes as physical education had to be discontinued due to the pandemic. In a similar situation, screen recording became a thing for lectures, video conferences, webinars, and training. OPPO smartphone took it upon itself to offer in-built screen recording functionality.

OPPO Reno6/Reno5 can be used for a successful screen recording in OPPO. So, let us dive right into it without delaying this any further!

The user is expected to first turn the “Screen Recording” feature on OPPO F5. Until that, the screen recording process cannot be initiated.

To do so, hold your OPPO phone and navigate to the “Settings.” After that, click on the “System Apps” from the list of menus that pops up. Hit the “Screen Recording” feature afterward.

Turn the toggle green next to the “Record Screen Taps.” The feature is activated. Now, to record the screen, the users are offered two methods. 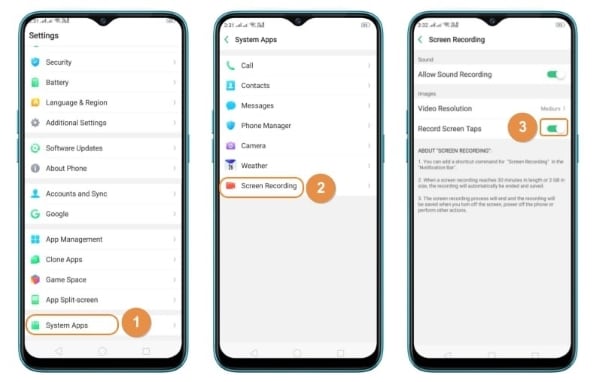 Step 4: Through the Notification Panel

The first method is recording the screen through the Notification Panel. Swipe the screen from top to bottom, where you will see the option of “Screen recording.” Press it to begin the process. 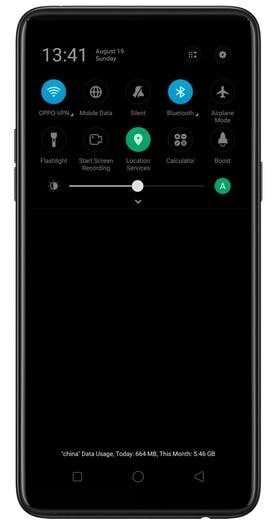 Step 5: Via the Sidebar

The in-built screen recorder OPPO can be used to record the screen via the sidebar. Accessing the sidebar is not tricky. Look for a line on the right side of your home screen. Click on it to access the “Screen Recording” option. 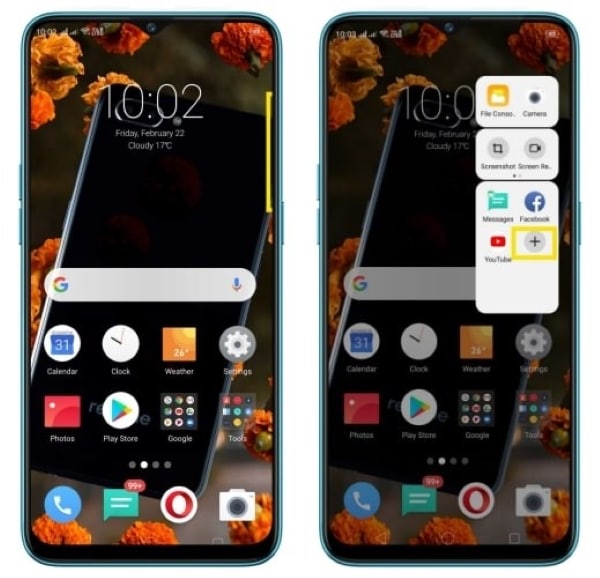 Apart from the OPPO screen recorder, the market offers some popular screen recorder apps. Their usage is simple, and any beginner can record the screen in a series of easy steps. Fortunately, the section introduces three renowned screen recorders for OPPO smartphones.

The first screen recorder OPPO is Mobizen Screen Recorder. It is considered one of the best apps selected by Google. The tool does a phenomenal job in offering a clean screen recording process, free of the watermark. The user can activate the “Clean mode” feature to get rid of a watermark while using the recorded video for professional usage.

Mobizen has got the user covered by presenting full HD with QUAD HD video resolution. It means that the OPPO user can upload the video output to different social networking websites. The “Facecam” feature lets you express your reactions in a video as you record the game or voice together.

How to screen record in OPPOis a significant concern these days. But it is also vital to get hands-on the viable and workable OPPO screen recorder. XRecorder is one such tool that has made video recording an absolute treat for the people in the loop.

XRecorder has taken it upon itself to capture clean and smooth screen recording and screenshots. The users are free to record gameplay on the device, trim the unnecessary parts of the video, and access audio recording without noise. There is no watermark on the videos, making the process flawless for the media, educational, and corporate sectors.

AZ Screen Recorder is next on the list, which has taken the video recording to a new level. The screen recording in OPPOthrough AZ has become flawless due to its unmatched services. For instance, the video is recorded in HD quality with 60FPS as the frame frequency.

Moreover, there is no time limit to recording the video. There is a small overlay window that aids in recording your facial expressions. This feature can be easily enabled through the “Facecam” option. Additionally, a GIF maker helps record the screen in the form of a GIF. The videos can be easily shared and exported through Wi-Fi.

Wondershare DemoCreator has to be your first choice for Windows and Mac if screen recording is crucial for you. Many experts recommend it in the field due to the multiple features it brings to the house.

Wondershare DemoCreator allows the user to choose from three different options. Pick “Record screen and webcam” if you wish to record yourself in the camera. The “Record from PC Screen” means that the user can record the whole system screen. Not only this, but the tool also brings recording from full screen, custom, and target windows.

The target window signifies a typical window such as Mozilla Firefox to record the working there. The microphone can be switched on and off based on the usage. The frame rate and quality are altered as the user demands. DemoCreator lets the user state a time after which the recording would be stopped automatically.

With that, the pausing and initiating of recording keys can be changed. Choosing the screen drawing tool is also a viable feature of the app.

It is the point where the user can make specific editing to the video. The DemoCreator video editor helps you edit, such as altering the brightness, trimming the video, or cropping the unnecessary pointers.

Wondershare DemoCreator makes sure that the user can record every aspect of the video while presenting each tool in the most flawless fashion. Therefore, to record the screen for personal or professional usage, DemoCreator has to be your first choice.

The screen recording has become part and parcel of our lives, and there is no denying that fact. People use it in the media industry, educational setup, corporate world, and personal workability. For the same reason, the article covered how to do screen recording in OPPO while introducing OPPO screen recorders. Wondershare DemoCreator and its multiple features were also the cruces of this write-up.

An easy yet powerful editor

Numerous effects to choose from