The Elgato Game Capture HD is excellent for simple game capture. First is the obvious ability to capture gameplay videos and save them to a computer. This is the basic feature when you connect the capture card, from which you can access other features, including live streaming. The Elgato capture card comes with the ability to stream to either YouTube or Twitch with the click of one button. Both XSplit and OBS directly support Elgato Game Capture HD.

The live commentary ability of this capture card is well adapted to make for an enjoyable live stream. The capture card HD allows you to find the perfect balance between audio in game and your voiced commentary, and can automatically lower the volume of your game any time there is input from your microphone.

For viewing other than capture card, the Elgato Game Capture HD comes with the ability to quickly cut footage into sections at any point on the timeline. It doesn't have many editing tools, but the ones it does have work remarkably well. For more powerful editing, you will need to pass them to whatever dedicated editing software you might have.

The capture card HD itself can capture video as high in quality as 1080p using either an HDMI cable or component input.

The Elgato Game Capture HD is compatible with both PC and Mac for uploading videos.

The Elgato Game Capture HD can be purchased on Amazon for $135.99 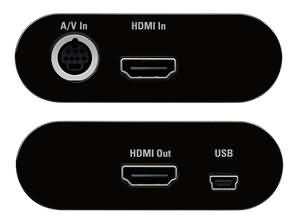 The Elgato Game Capture HD comes with an HDMI cable and a special PS3 cable so you can stream games using the A/V In port on your PS3. The PlayStation 4, Xbox 360 and Xbox One can all be connected to the device via HDMI. Play on older gaming consoles can be recorded using Component or Composite cables. An adapter for this is included with the device.

This capture device is incredibly simple to setup. Just follow these directions:

The Elgato Game Capture HD has a one-click live stream to Twitch option. To use it, do the following:

Elgato offers four different products for video game capture and streaming: HD, HD60, HD60 S, and HD60 Pro. The Elgato Game Capture HD is the only one that allows for retro gaming input, but lacks 1080p60 capture and instant gameview. The HD60 also lacks instant gameview, but unlike the HD60 S, has the ability to save a master copy of your live stream, while live streaming. The HD60 S offers instant gameview, but, as mentioned before, lacks the ability to capture gameplay from retro games. The HD 60 Pro is the only capture device in this family that doesn’t use USB (either 2.0 or 3.0, depending on the model) to save to the users PC or Mac, but instead it is installed using PCIe.

If you are looking for screen and webcam recording with HD resolution, you can also try DemoCreator. Recording screen from full screen, 1080p,2k and more. Webcam resolution can be also customized. What's more, after recording, you can enter into the editing interface to add captions, annotations, stickers to make your video professional and attractive.

Steps to use DemoCreator screen recorder:
1. Download and launch DemoCreator.

2. Start your recording project and set the webcam and microphone from there.

3. End recording and entering to the video editing interface.

4. Cut video, cut or combine your video clips and add annotation, sticker, captions if you want.

5. Add your brand watermark or export with any format you would like to.