If you are an avid gamer, you probably spend a lot of time developing your skills. Once you have mastered one or two games, you will be ready to share your skills with other gamers or the world. To do that, you need to use a game screen recorder. These are tools that are designed to help you record or live-stream your gameplay to sites like Twitch, TikTok, or YouTube. 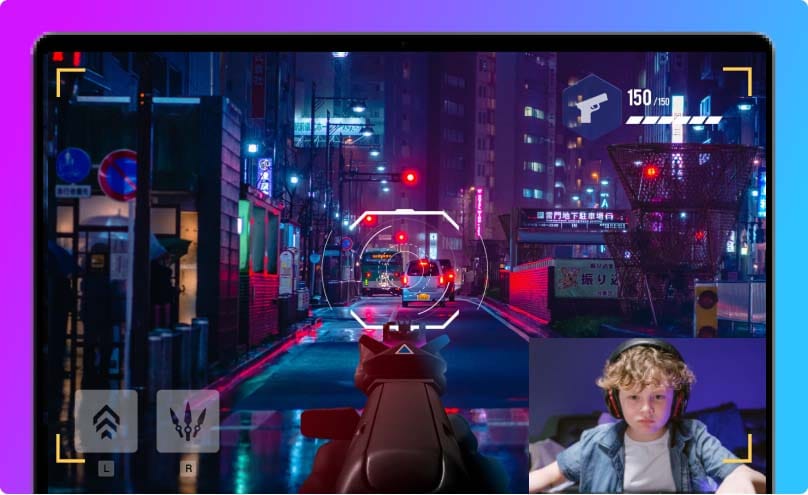 Wondershare DemoCreator is a very simple screen recording program with a video editing function that can be very useful when you want to create tutorials, product demos, products review, and gameplay. The fact that it can record the screen at 120 frames per second makes it one of the few screen recording tools that you can use to record gameplay without using too much of the computer's resources. 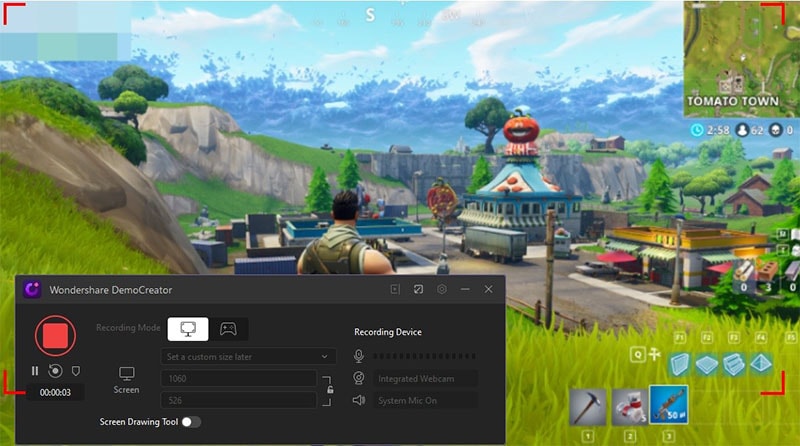 It is also one of those tools that are very easy to use. Screen capture can be completed in just a few simple steps and then you can use the program's in-built editing tool to edit the video in numerous ways. The DemoCreator game recording software is embedded with many game video templates and effects that can be applied to your game videos. The use of hotkeys in the recording means that you can record your gameplay without having to interfere with the game.

Bandicam is a favorite of many gamers primarily because of the affordable price point and also because it can capture pretty much anything. As a gamer, you know that no two games are the same and they come in a variety of formats, but that is of no consequence to Bandicam. It will capture games running at 3840 x 2160 just as easily as it can record a low-resolution game that you can play on your browser. This is because it uses up to 144 frames per second.

It is also the ideal choice when you want to add commentary to the video as it can easily record system sound and the microphone. With a h.246 encoding, you can use Bandicam video game recorder to record more than 24 hours of video continuously and even change the frame rate while you record. 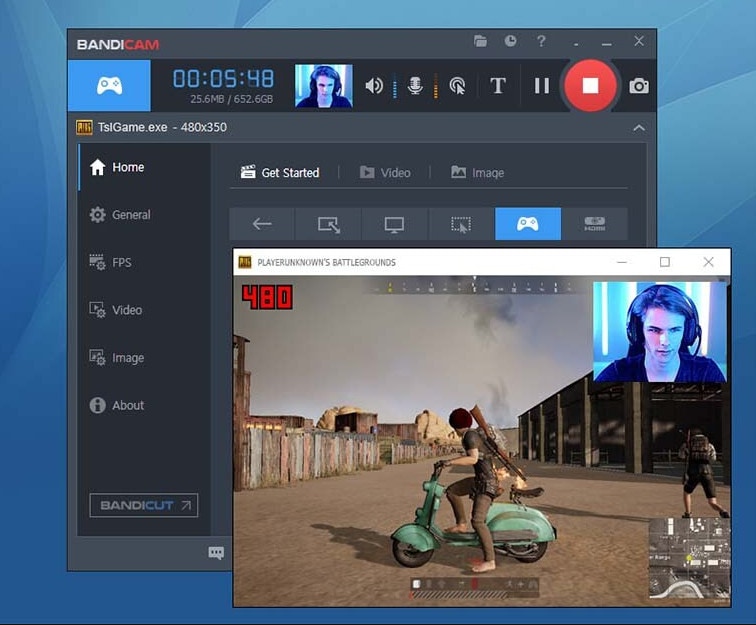 Open Broadcaster Software (OBS) is a professional game recorder for PC and Mac that supports a wide range of video formats. This is one of the reasons OBS is so popular among gamers, along with the fact that it is also one of the best live streaming tools to use. OBS allows users to easily live stream gameplay to a lot of platforms like YouTube, Facebook Live, and Twitch.

OBS gaming recorder is also an open-source program with a robust following online and it is compatible with Windows, Mac, and Linux operating systems. Because of the numerous features the program has, opening it up for the first time can be overwhelming for most. But there are numerous tutorials online that can help you get a handle on how to use OBS. 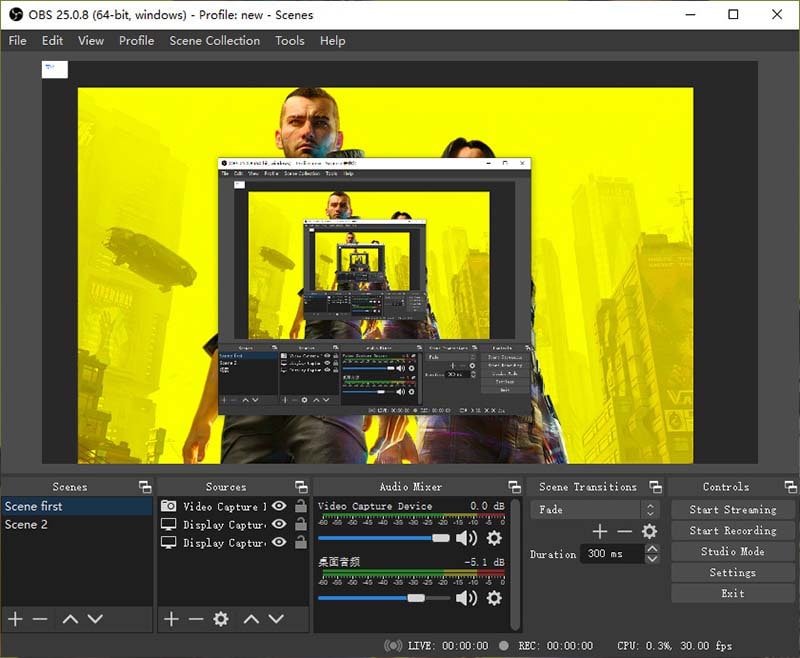 If you are looking for a tool that offers all the features you find on OBS but is very easy to use, Streamlabs OBS is a good choice. This is because it was specifically developed to simplify the OBS interface easier to use.

This game screen recorder makes screen recording very easy to use and comes integrated with features that will help you stream and record gameplay is very easy. The program easily connects to the Streamlabs account to make it easier to upload the recordings to websites like YouTube. 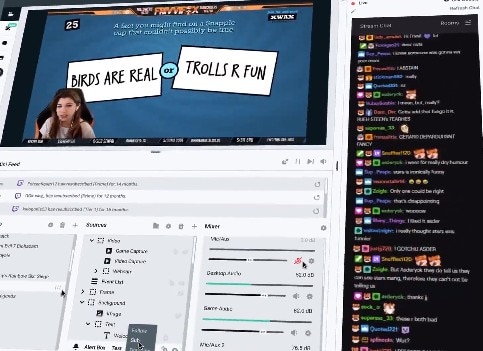 MSI Afterburner is a hardware monitoring tool that can also be used to record gameplay footage. Because of its main function to monitor the hardware, MSI Afterburner can record high-quality videos without affecting the program's hardware too much.

It also has minimal effect on the computer's resources, even when you are recording at the highest possible settings. It is also completely free to use and will work with mid-level computers that don't have too many resources to spare. 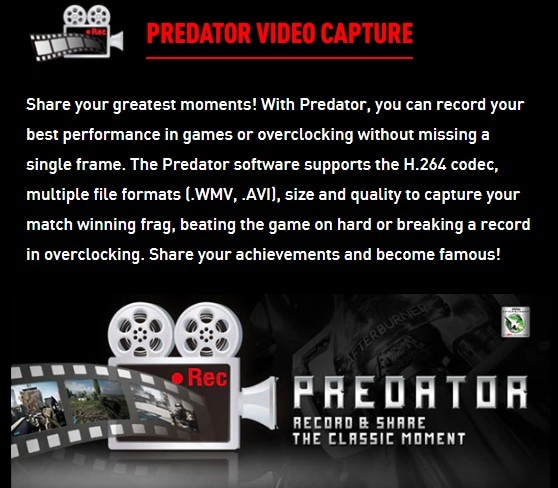 Radeon ReLive is AMD's recording software and is therefore only useful to you if you have the AMD graphics card. It utilizes the GPU for most of the encoding, leaving the CPU for other tasks and thereby sparing the computer's resources.

One of its main benefits is that it offers users the chance to upscale the recording. This means that even if you are playing at 1080p, you can still record the game at 4K UHD. 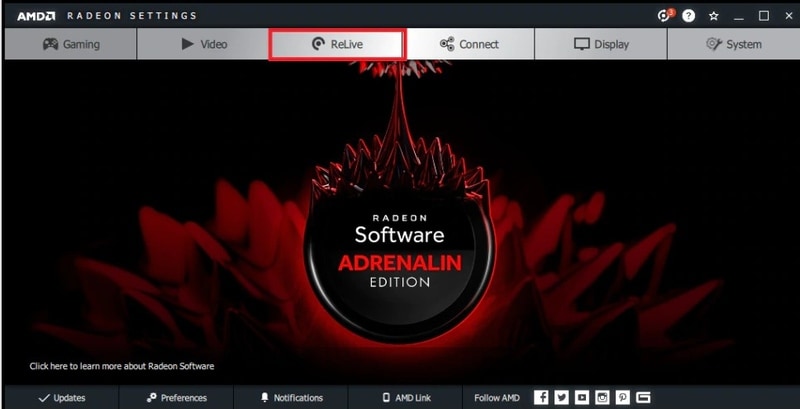 Fraps is perhaps one of the oldest gameplay recorders for PC in the market. It has been around for decades but is still relevant because it has received quite a number of updates over the years. But as you can guess, the user interface is a bit very friendly.

But Fraps has been around because it is a fully capable solution that allows users to record gameplay in very high resolution. It does however lack an editing suite like the one you would find on other gameplay recorders like OBS and the free version will add a watermark to the recording.

Nvidia GeForce is a solution that will not just allow you to capture gameplay and live stream videos, but it will also update Nvidia drivers on your computer. Because it uses the system's GPU for encoding purposes, the computer's performance will remain unaffected when using GeForce to record or live stream gameplay.

You can also use it to record videos in very high resolution up to 4K and it is very easy to use. It will however only work if you have Nvidia graphics cards on your system. 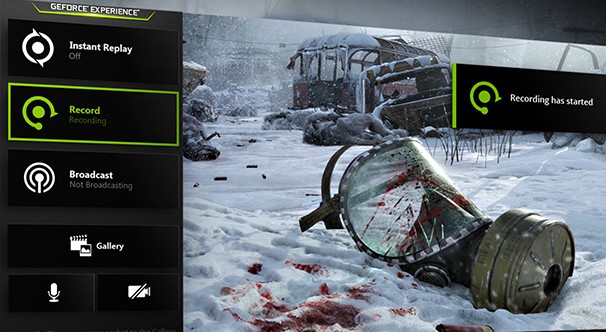 XSplit is a simple to use but very powerful gameplay recording and lives streaming tool. It allows users to record or live stream games high-quality videos to sites like Twitch. You can easily start the recording in a single click and configure the settings in some of the settings to suit your PC's performance needs.

Gamers like XSplit because it does all the work, allowing you to fully focus on playing the game. It also has an in-built editor that can allow you to edit the recording in numerous ways before sharing them with the world. 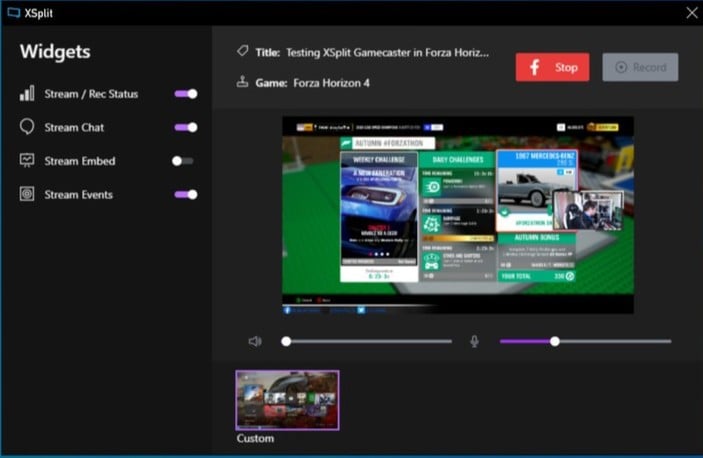 Action is a great choice when you are looking for a solution that will support everything in terms of graphics cards. This software will work very well with Nvidia, DirectX, and OpenGL. It is also one of the very few game recorder apps that will work on mobile devices and include slow-motion recording.

Action is also useful when you want to take screenshots, with hotkeys making the process easy. Most users have also found the Greenscreen mode to be very helpful. Videos can be recorded in high resolution up to 8K and all audio formats are in M4A format. 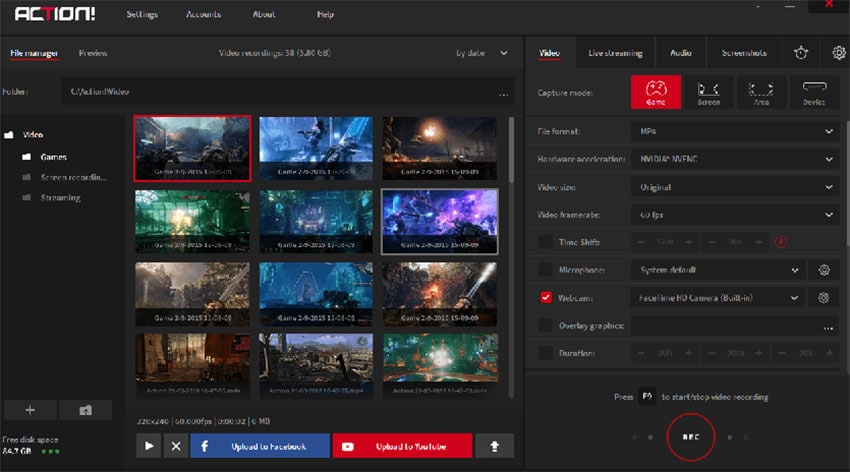 The Icecream screen recorder is another tool that you can use to capture gameplay. It is compatible with both Windows and Mac and it has an easy-to-use UI that makes it one of the best tools for beginner users.

With this tool, you can choose if you would like to record the full screen or a specified region of the screen. It also comes with a basic editor that can be used to make changes to the video to make it as unique as you want it to be. 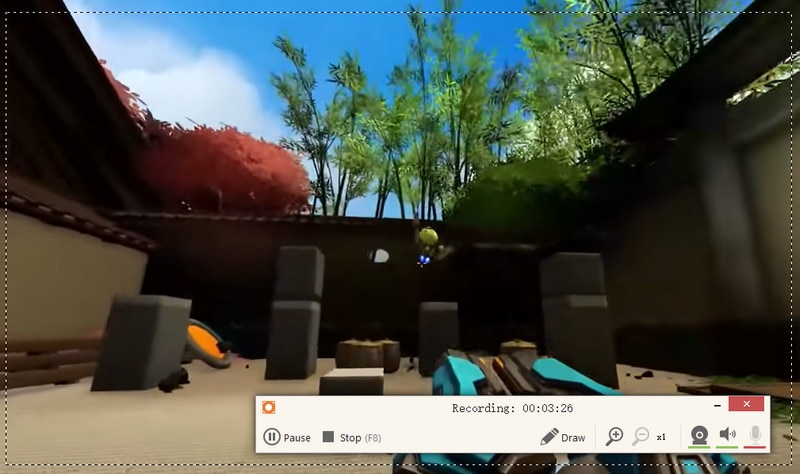 This is a screen recorder that is ideal for both beginner users and professionals. You can use RecExperts to record a specified area of the screen, a specific window, or the full screen. It also supports audio recording both of the system sounds and microphone narration.

It will also record gameplay in very high quality, up to 4K resolution. You can also use it to schedule a recording and then share the recorded videos on various websites indirectly. 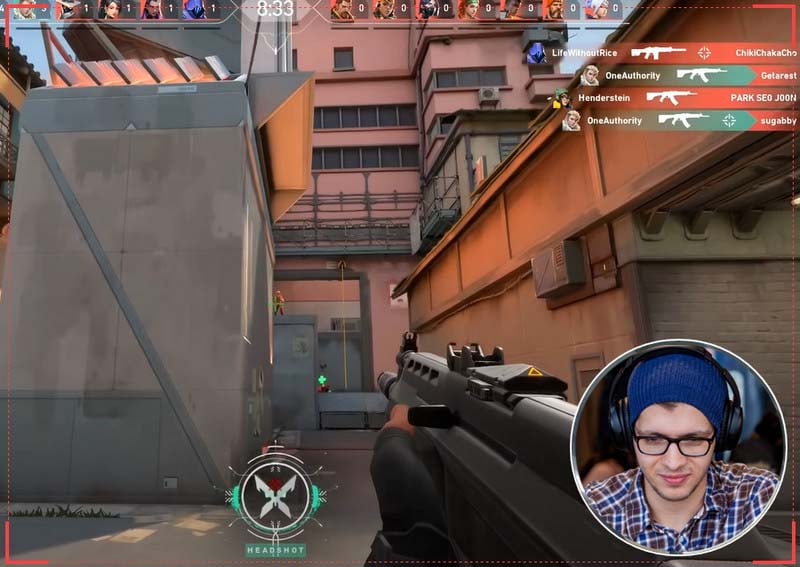 The Xbox Game Bar is a pre-installed free game recorder that comes with Windows 10 and is useful for recording game clips and screenshots. Apart from recording gameplay, it will also be useful to you when you want to record various Windows 10 apps.

It is very easy to use and it will record PC games. It can instantly access widgets for screen sharing, allowing you to even record the chats you may have with friends as you play the game.

ApowerREC is a tool that is available for both Mac and Windows with features that allow you to record the screen. Gamers can use this program's fast screencasting features to record the whole screen or a specified region of the screen.

You can also use it to capture webcam footage and record the audio both from the system sounds as well as microphone narration. 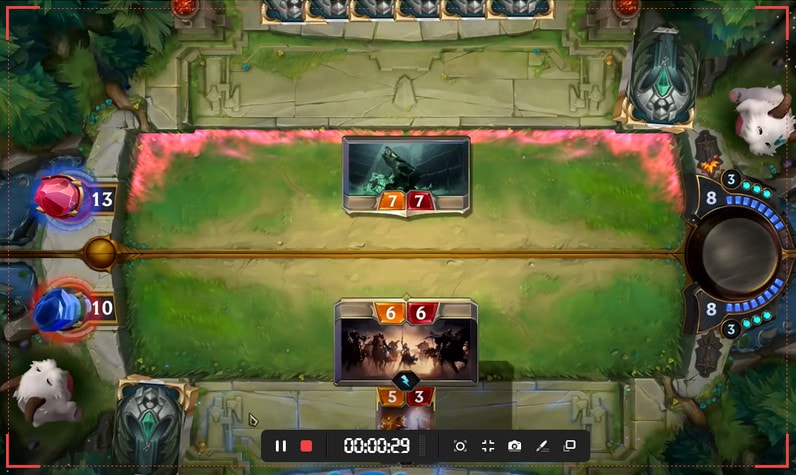 1. What is the Most Important part of Recording Gameplay?

The most important part of recording gameplay is without question the CPU. But we must keep in mind that there are some gameplay recording tools that will leverage the GPU for encoding and completely leave the CPU alone. You will also notice from our review above that these tools will not affect the computer’s performance.

The bandwidth between the CPU and motherboard is actually where the highest level of encoding will happen. But only for tools that do not use GPU for encoding. But since upgrading the CPU or the motherboard may be expensive, you can update the graphics card to get better performance.

2. Why Gameplay recording is Choppy and Lagging?

When the gameplay recording is choppy or lagging, it often means that you are using inferior software to record the screen. Many programs will offload the encoding to the CPU which can be a drag on the system resources causing lagging or choppiness during the recording process.

The best way to prevent this is to use a capture card rather than a program that uses the CPU for encoding purposes. Capture cards often use GPU which decreases the frame rate, making the recording process smooth.

3. Which Software is Best for Recording Games?

Of all the tools we have outlined above, Bandicam is the best solution for gameplay recording. To begin with, it is specifically designed to be a gameplay recorder with features that are specific for gameplay recording. It records at the fastest rate of over 144 frames per second and it can be used to record gameplay for up to 24 hours straight. However, the DemoCreator game recorder support game recording and game video editing in one software, which can meet all your need in one download, it is pretty convenient.

How to Record Gameplay Without Losing FPS