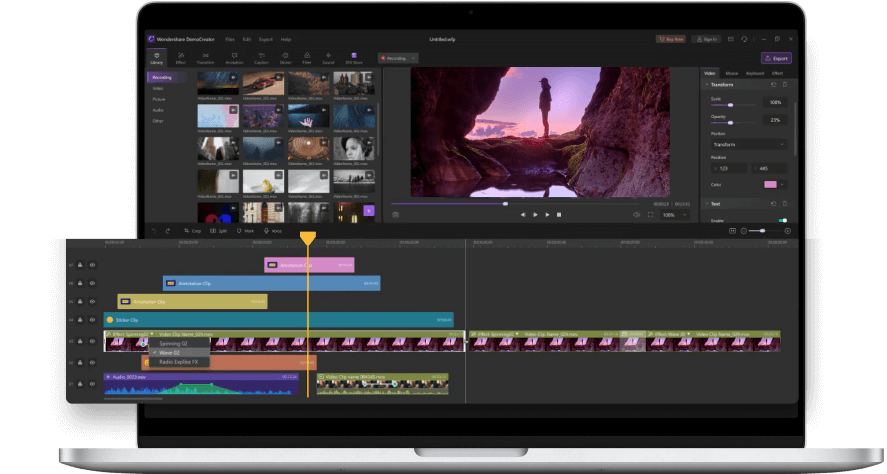 How to Use Masks to Create Cool Video Effects

If you ever watched a movie and wondered how one character appears twice in the same scene? Also, how does an intro video show two images or pieces of clip display to overlay and merge together? Both of these functions can be achieved through what is called, masking video editing.

The masking video editing technology allows you to merge two parts of a video together into a single shot. Masking serves as a great technique to create visual effects that appear like fantasy. Moreover, masking can beautify realistic footage by providing the ability to overlap stylistic effects, such as flares in sunlight or speed lines that follow a fast-moving object.

Masking techniques provide special effects, without which your video is confined to the imagery as it was originally captured. It will be fair to say that with masking, the possibilities are virtually infinite.

Let’s examine more about masking, its popular masking techniques, and how you can use masking to embellish your videos.

Part1. What Is Masking?

Masking is a styling feature available in video editing applications that enables you to pick out a specific section of a video or use the overlays to hide, duplicate, reveal, or modify your footage.

The “mask itself is your chosen part of the clip, which is selected by means of a template or a custom frame. This mask then is separated out so that you can make any changes as you want and create your desired visual effect.

Masking techniques empower you to perform various astonishing things with your videos. Whether you wish to clone any characters or objects, overlap multiple clips, create glitch effects, or blur out anything, and more. Masking makes videos more invigorating, enjoyable and provides a professional and attention-grabbing look.

Masking is more than just a blend of different footage – overall, there are 3 types of masking:

Within the text masking type, there are two additional kinds of masks, and these are “text mask” and a “text reveal mask”. A text mask stylistically overlays text on the clip. Whereas, a text reveal mask contains text and displays a video being played within the text. This is a popular technique used in video introductions, a reveal mask allows for text to appear on-screen from a specified section.

An image mask contains a secondary layer or alpha channel to create a cut-out or gradient between two different footages. When two footages are merged together, they overlap each other to be seen within the image cut-out.

Custom Masks are similar to image marks, except that the cut-outs are made using a freehand selection tool. This type of mask can come in any shape possible as it can be used to select any portion in any dimensions of a video.

Part3. Ways to Use Masking

There are several ways to make the most of the masking technique in video editing, some of them are as the following:

Get rid of Unwanted Details

Not everything goes perfect during video capturing. So if there is something in any part of your video that you wish to remove, then applying a mask would certainly be a good idea. Blurring, pixelating, duplicating, and blending can work in conjunction with the mask to eliminate the undesirable stuff in your videos.

You can combine various styles, colors, types of footage, or graphics by simply overlapping multiple footages. Also, by managing the opacity of your videos you can show a masked video through multiple layers, as you desire. The blending options are an amazing way to effortlessly blend different videos in a way that the final video is unified, layered, and full of eye-catching visual appeal.

With masking, you can produce more intricate transitional effects among changing clips. Simply overlay one clip over another and adjust the transparency via a custom mask for an attractive faded effect, and there you go!

Moreover, you can also apply a single figure as the masked element to track them as part of the transition by adjusting the custom mask as the subject moves off-screen. Lay this tracked figure atop the second clip to expose it as the subject walks off-screen. Apart from these examples, you can try even more ways to apply masks to create new transitions.

If want to blur something, just apply a template to produce a mask over the desired object. Using this technique, only the mask that has been created gets blurred. This technique is often applied during videos when the subject remains anonymous, but can also be used to hide confidential details for privacy, such as addresses, phone numbers, last names, etc.

In video editing terms, cloning is when you combine two different parts of a video in which the same person that has been shot is present in the same place. This is a fairly common example in movies and shows where an actor must play two different characters in the same scene.

Masking Video editing is used to isolate one character and overlay them into the other part of the footage. This appears as though the same person really is two different people appearing in the same moment.