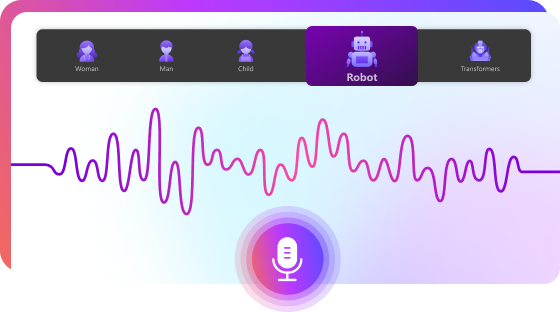 Indoor or outdoor, games are always entertaining and engaging. While playing games, people brighten up, laugh, appreciate, enjoy, and have a lot of fun. Since the technological revolution has altered our understanding of things in our life, it has also altered the games we used to play as children. Children nowadays like to play video games that can be found on the internet, as well as on desktops, PCs, and mobile phones.

Many factors in a game video capture the user's attention, and one of them is "voice"; voice gives life to game videos and makes them worthwhile to watch. On the internet and on desktop computers, there are a variety of voice changers that can be used to give characters in games and videos different voices. Including a good dose of comedy and amusing voices in your video game will help you establish a devoted fan base who follows your gaming adventures attentively. This article explains a few game voice changers.

Wondershare DemoCreator  is a one-of-a-kind screen recording application. It will surely capture your films with ease, but it is also proactive enough to provide you with the option of enhancing them with a smart and efficient editing tool. You may concurrently record your PC screen, webcam, system, and microphone audio; you can also set the frame rate and the recording region.

DemoCreator also offers a fantastic voice changer function. You can transform the voices of different characters into a female or male voice when editing a gaming video. In comparison to other tools, it also allows you to change the voice while editing the video, rather than having to do so separately. You can choose from five different voice-changing effects, including female voice, male voice, robot voice, and transformer effect, to make the gaming video more entertaining.

One of the very extensive features of Wondershare DemoCreator is the video editing tool. The videos can be edited, split, clipped, and altered in various ways. This software allows you to create personalized titles with animation and text. It's possible to add fade-in and fade-out effects. This software allows you to make interactive videos with cursor movements and annotation effects.

Here’s a step-by-step guideline about how to change voice for the game video by using DemoCreator.

To begin the procedure, download and launch the DemoCreator application. After that, you may move on to the phase of editing the video; you have two options for this. One is to edit a previously recorded video, while the other is to make your own video. If you wish to alter a game video, select "Edit Video" from the menu. 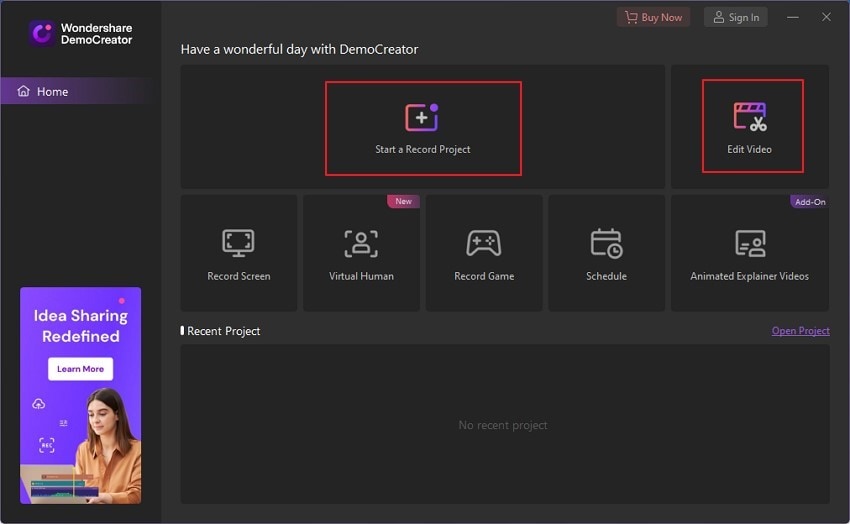 Step 2: Select the Video You Want to Edit

To choose the game video, click the "Plus" symbol on the left side of the screen once the tab has been opened. You can pick "Import Media File" and import the video after clicking the button; drag it to the timeline to alter the voice. 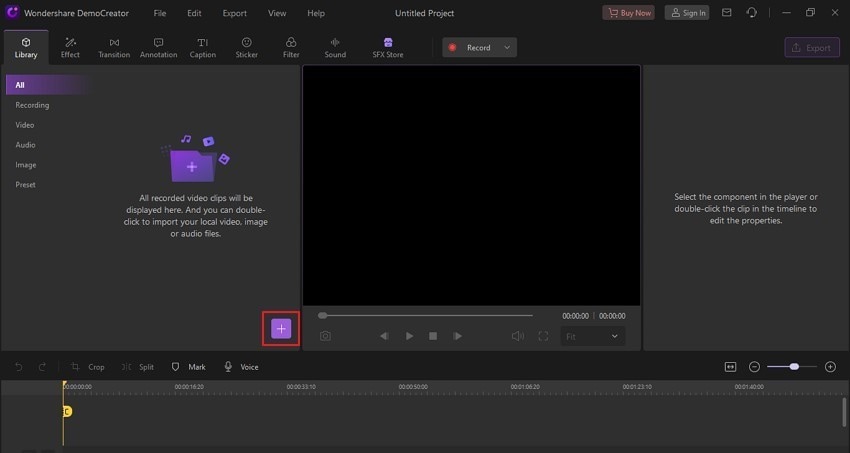 Once you have selected the clip in the timeline, you will see two options on the top right side of the properties panel. Select "Audio" among the two options and scroll down to "Voice Changer." This game's voice changer has a good variety of different voices so that you can change the voice according to your need and mood. You can change the voice of the game video to a man's voice or a woman's as per the requirement of the game. 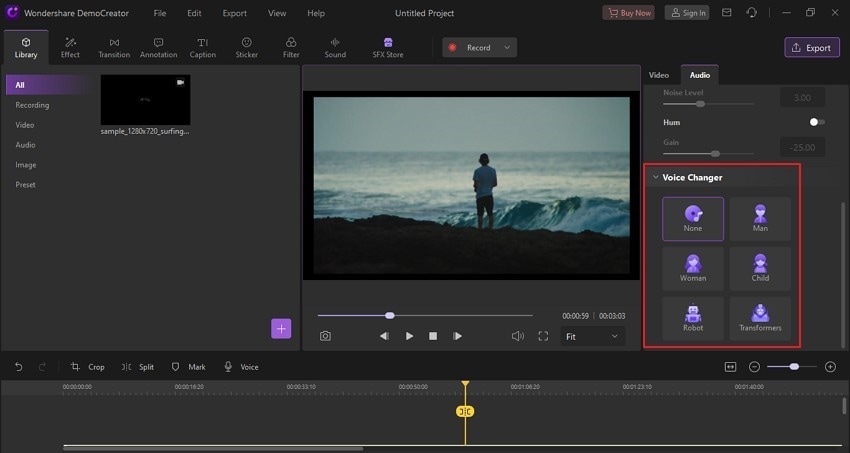 Once you have changed the voice of the game video, you are ready to export the video. Exporting is a simple process when it comes to DemoCreator; click the "Export" button on the top right of the window, and it instantly shows the options to save the video. You can change the format of your video, browse its location and save it by clicking the “Export” button. 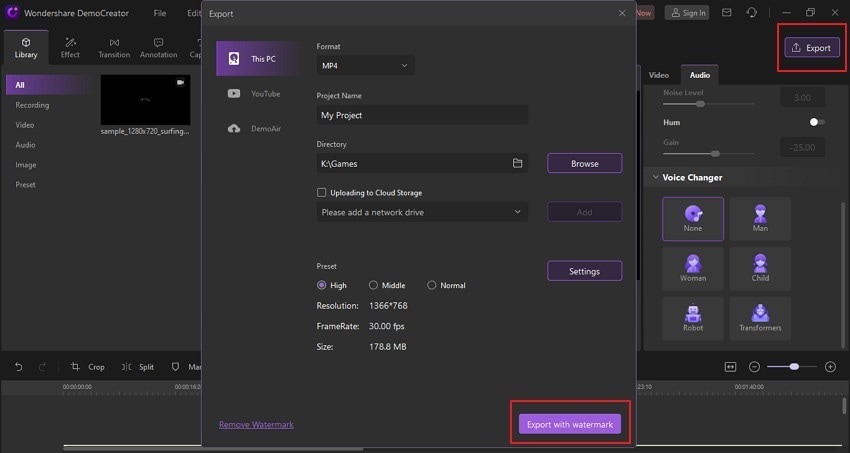 If you're looking for a high-quality voice changer for your video, you can check out Morphvox Voice Changer. It comes in a number of various packages. You can either use it for free or pay the price to upgrade to the Pro version. When it comes to free versions, there are three voice options: child, female, and a single male. If you want the finest quality, however, you need to purchase the premium edition.

Morphvox is ideal for gaming and communication since it modulates your voice in real-time. Morphvox Voice Changer includes a few unique features that allow you to alter the voice of your game video simply by clicking on "Voice Selection." A list of several voice effects will show once you click, and you can change the voice to that of a man or woman or any other effect you choose to attempt. 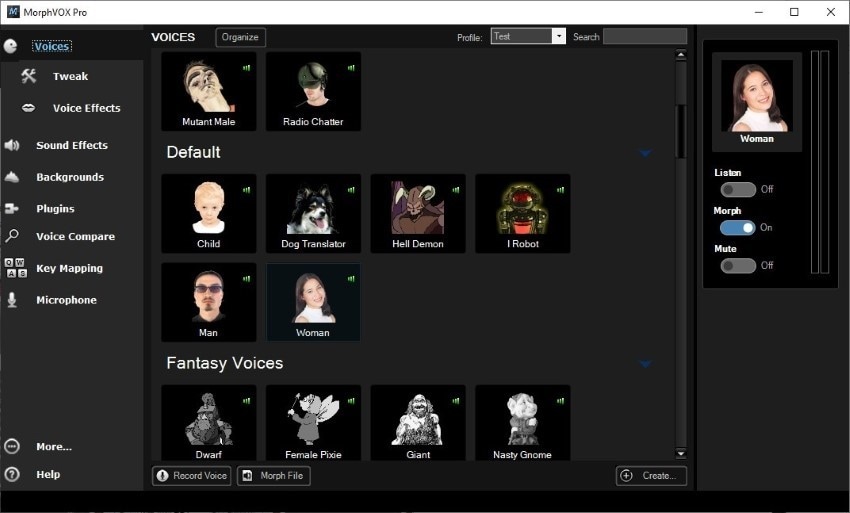 Let's imagine you want to amaze your friends by using various intriguing voice effects while watching game videos; AV Voice Changer can be the game voice changer for you. It includes a good range of audio options, including a voice changer, so you can experiment with your voice's inventiveness and attract the audience.

With this software, you may customize your voice with whatever effects and designs you choose. You'll have complete control over every component of your voice, as well as the ability to change it. Remove the effects of age, gender, and voice; make it deeper, higher, more feminine, more masculine, younger, older, or anything you like for your gaming videos. 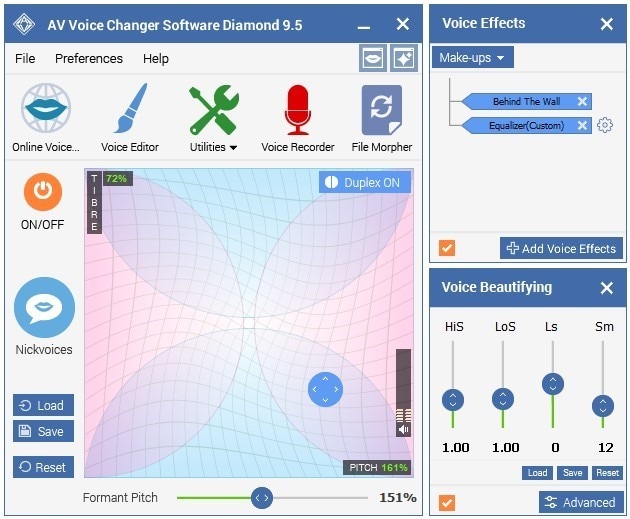 The best game voice changer has to be Voicemod because of its accessibility and easy-to-use features. Voicemod has established itself as the industry leader in real-time voice change and soundboard technology. It has a huge library packed with various sound effects that can make your gaming videos worth playing and enjoying.

Its connectivity with a variety of chat platforms makes it a game-changer. It has a user-friendly interface that requires little effort to grasp. Voicemod is a subscription-based service with a large number of voice alternatives. 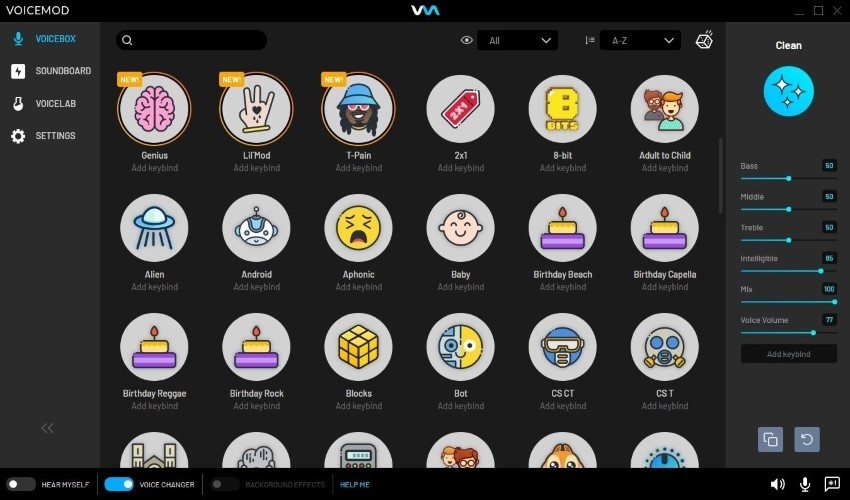 Voxal Voice Changer- best game voice changer that works perfectly well for both Mac and Windows. It comes with a huge variety of voices and effects that help add voiceovers to your game videos. It gives an option to edit your previously made videos and has extensive features to make a new gaming video as well.

Users can switch from masculine to feminine voices and vice versa. They can also replicate a robot's or alien's voice, as well as an echo or a TV announcer. The voice changer has a simple and user-friendly interface that makes altering your voice a pleasure. 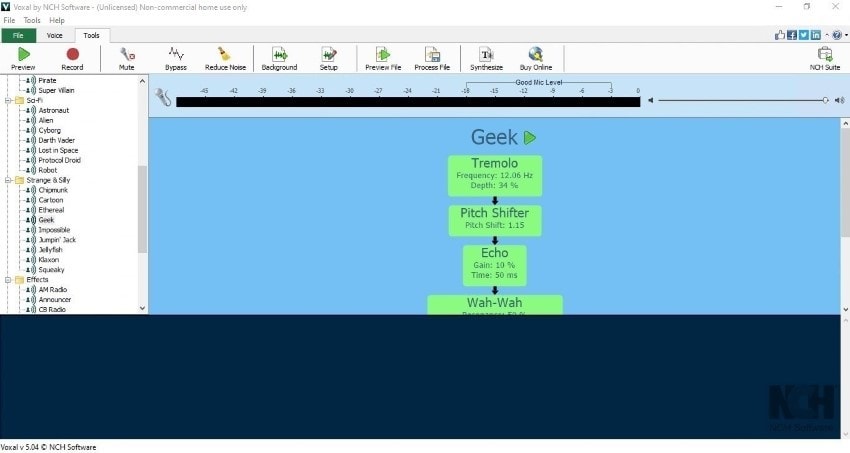 Clownfish is a free Windows game voice changer that has a very simple user interface and doesn't put a lot of burden on your machine. Although Text to Speech/Voice Assistant is the most beneficial of the functions available, it may also be utilized as a music/sound player. This application converts your text to speech and reads it out in one of the voices available from a drop-down menu.

It's a simple and free program for changing your voice and enhancing your video. Clownfish Voice Changer is a free game voice changer that lets you go back and forth between a range of voice effects to suit your needs and preferences. 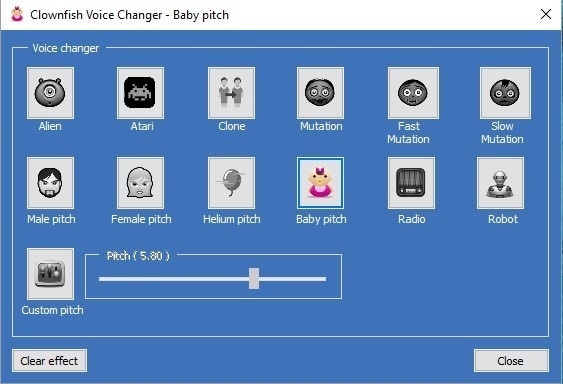 Many game voice changers are available on the internet and may be used to modify the voice as needed. However, online voice changers do not edit the voice in a video format, which is a disadvantage. To do so, you must first upload or record audio, then alter the voice and attach it to the video. It's a difficult and time-consuming procedure. The following software are a few online gaming voice changers:

As it genuinely says 'Female to Male voice changer,' Lingo Jam is the most intriguing online game voice changer you will ever use. When editing a game video, such as a cricket match, you can lower the pitch of the characters' voices to alter their voices. You can also use the drop-down menu to change the pitch of voices; Lingo Jam also allows you to record audio online and apply voice effects to it.

It has a variety of applications, but the best one has to be when a person is having voice therapy. It contains a large number of voice effects, and you can alter the voices to that of any cartoon character, such as chipmunks or mountain trolls. They're simple to record, and you may download them after making a few formatting modifications.

This game's voice changer is the easiest to use because it is completely free; no registration or subscription is required. It does not reduce the quality of the video while editing it, and it does not compress the original file. Because of the intuitive design, it is simple to use and requires no special skills; you can begin editing the game video right away.

It includes a large feature set and voice effects library that will make your films more entertaining, and it works with all audio formats and files up to 10 GB. There are two ways to edit audio: uploading it or recording it right immediately. It contains some pretty cute voice effects, such as robotic voice, monster, and masculine, that will draw in a crowd.

My Voice Mod is a fantastic voice changer for video games; it offers a lot of features and voice-changing effects that will make your videos more entertaining. It has a unique function in that you may use your voice to send personalized audio messages to your family and friends on social media sites. It gives you a new way to communicate with your friends and relatives.

Since it contains 12 distinct voice effects, it will capture the interest of children when utilized in gaming videos. You can replace a gigantic creature's voice by replacing it with the voice of a hell demon, robot, or other creature.

The distinctiveness of Voicebooking's features is emphasized. It is a massive game voice-changer platform to date because it has people working for you all around the world. You can hire native English-speaking specialists and email them your task; they will record the voices in their studios while staying at their homes.

They handle everything relating to your assignment, including audio protection, on their own; all you have to do is pay the fee they demand. You can make fantastic and engaging gaming videos this way since they provide variation in their work.

It's a fun game voice changer that lets you create voice audio from a text; you can even create voices for your game video by writing text and then converting it to voice audio. It is completely free, and no registration is required. It allows you to download the generated audio and then apply voice effects to it, for example, making a game character sound like a robot.

This article provides a detailed study of game voice-changing software that are present in the digital market. We have even discussed the best game voice changing tool, which is Wondershare DemoCreator because it provides the option of testing the voice effects one after another, whereas other tools offer a one-time test of voice effects.