The free screencast and video capture software, Debut screen recorder, allows you to record everything occurring on your PC screen since it works with external and internal video capture cards. It makes it more interesting through certain functions like filtering and watermarks. The home version is free, while the professional requires purchasing to acquire a special Debut screen recorder code for the Pro version.

While most such software programs work with time limitations and apply watermarks, the debut screen recorder provides unlimited recording time. It also records from security cameras and webcams and exports the clips to common formats like MP4.

Debut screen recorder may not have an attractive interface, but it makes up for this in clarity. The elements are well labelled and easy to grasp and has a logical layout that also includes a web-based user manual. Therefore, it is user friendly and so beginners can understand the options they need without struggling. It comes with a stylish dark mode that makes the recording process clearer. 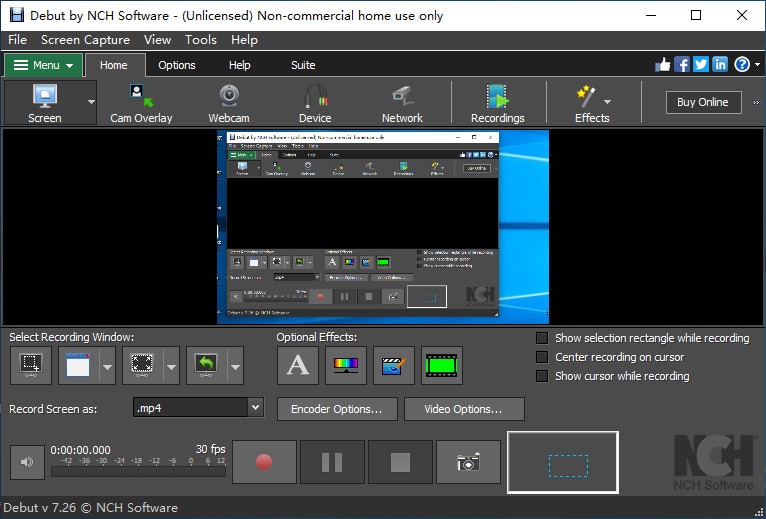 The interface is fully featured and up-to-date, allowing you to not only record and capture video but also manage and schedule recordings. It is divided into four major elements that include;

Part 2. How to Record Screen with Debut Screen Recorder

Use the following procedure to screen record a clip with or without audio using Debut video capture and screen recorder software.

After the Debut screen and video recorder free download and installation process, the software will automatically launch. 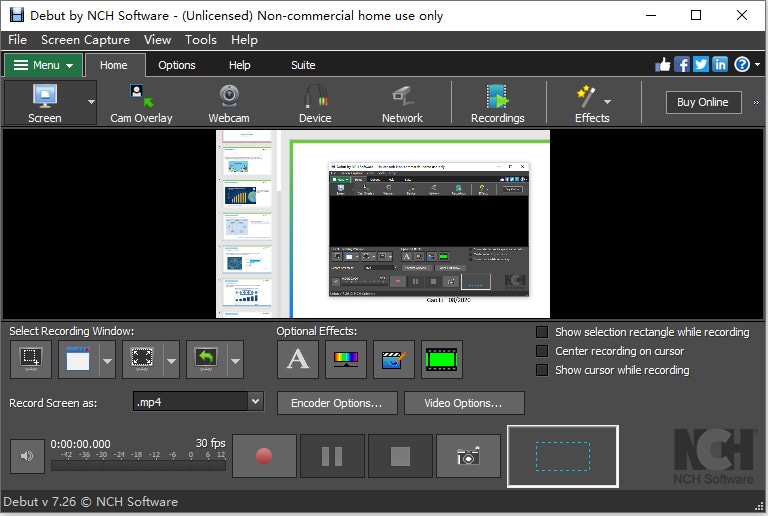 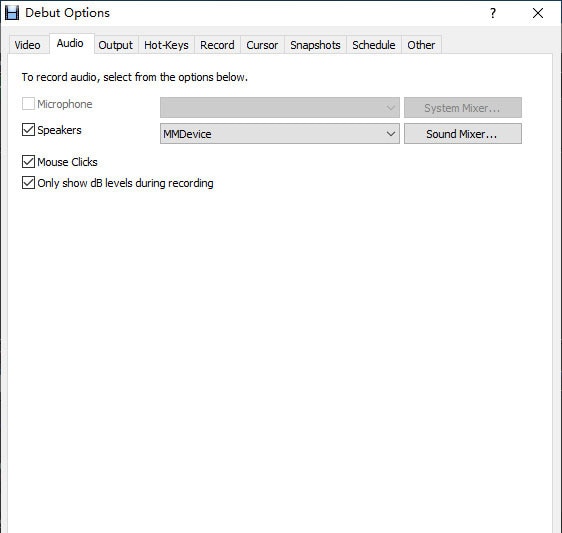 And then ensure that you check the "Microphone" option and select the preferred "Microphone" from the drop-down list and confirm using the "OK" function below.

Also check the "Record" option to set everything in the proper situation. 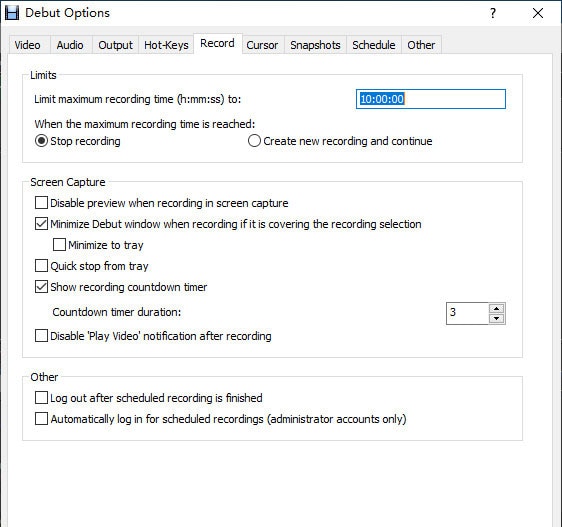 Alternatively, if you wish to record a screen video without audio, simply uncheck the "Microphone" checkbox.

To screen record on Debut Pro Video screen recorder, click on the "Record" utility or simply press "Ctrl" + "F9" on your keyboard. 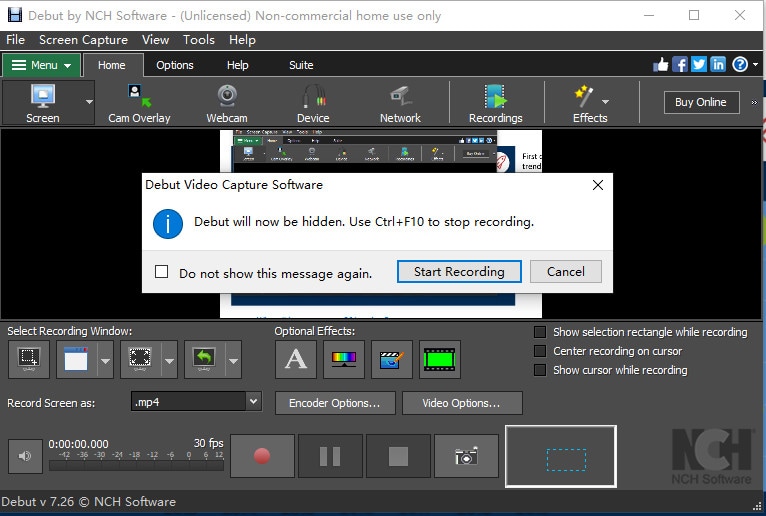 A dialogue box will pop-up and if you do not need it, choose "Do not show this message again" and then choose "Start Recording." You may use the Ctrl + F10 shortcut to stop recording.

Again, a pop-up will ask if you want to use the "Fast Capture" Mode. It provides a larger number of frames per second, thus makes the clip larger. If you are screen recording gameplay you may apply, else check "Do not show this message again" and choose "No," since it is not necessary for Windows Desktop screen recording.

As you record screen video with audio using Debut screen recorder, you will notice the levels. If the audio levels turn green to mean low or red to mean maxed out, you must adjust the microphone levels to ensure that your video acquires the best audio quality.

Video editing is important since it helps in capturing the most important parts. But, Debut screen recorder lacking a video editor is disadvantageous and makes it unreliable in making the best clips. In the process of seeking a better alternative, you should consider Wondershare DemoCreator, a great screen recorder for beginners and professionals. It is compatible with Mac OS and Windows and easy to work with. 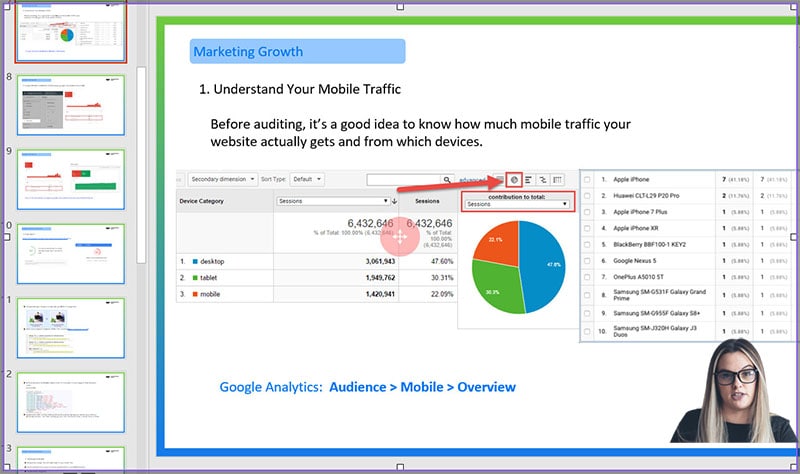 DemoCreator is the screen video recorder that ensures that you can record a computer screen and audio simultaneously, as well as a webcam video. It does not have time limits, allowing you to comfortably produce unique clips without duration issues. Different from Debut screen recorder, this user-friendly software provides beginners with an easy way to cope with all features, including the built-in editor, which comes with a variety of tools to enhance footage. Therefore, you can trim your clips to get the worthy parts to share with others.

Many users prefer Debut screen recorder because it supports multiple commonly used video formats. Additionally, it replaces other applications like Fraps because it can capture a whole screen or part of it. Its ability to capture sound from a microphone is also intriguing because you can create demonstration videos without recording the audio during editing.

Unfortunately, the inability to edit video clips and share them on social media limits users. Basically, social media fans that like posting videos to share experiences will have a difficult time using Debut screen recorder because they must find other means to share the videos, a process that could incur costs. However, with an alternative like Wondershare DemoCreator, screen recording, editing and sharing videos online is unlimited and fun.

Click here to get the detailed comparision about DemoCreator and Debut.