Ezvid is a fully-fledged screen recorder and video editor that captures everything on your computer screen. Millions of creators use it to create some of the most entertaining and informative videos we watch on YouTube, Facebook and other user-generated content websites. Ezvid screen recorder for Windows comes with cutting-edge features and effects including screen drawing, facecam, voice synthesis, voice recording, and speed control. You can edit your video and save it or directly upload to social sites like YouTube.

It's an easy-to-use video editing and screen recording software that won't spoil your footage with unsightly watermarks. If your work entails text-to-speech, screen capturing, video recording, and voice recording, there's no need for additional software as Ezvid houses it all. It is a proprietary movie maker tool geared toward professional touch with cutting-edge features. The software's outstanding features include real-time drawing, narration recording, playback speed control, voice synthesis, and webcam implementation while screen recording. Since it doesn't limit users on what to record on the screen, it stands out as the best recorder and video editing software.

How to Use Ezvid Screen Recorder Software

Since its release in 2011, Ezvid screen recorder has been downloaded more than three million times. This obviously points out that video creators have used it to produce millions of videos on YouTube. Here are the steps to use this productive software.

1. Download and install the Ezvid screen recorder software then launch it on your computer. 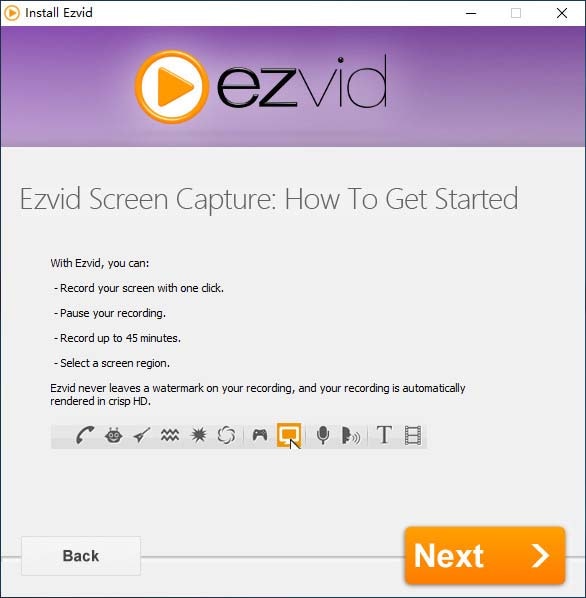 2. Open the icon and click on the “Capture screen” icon on the right side to start recording your screen. The software will record the whole area of your screen. 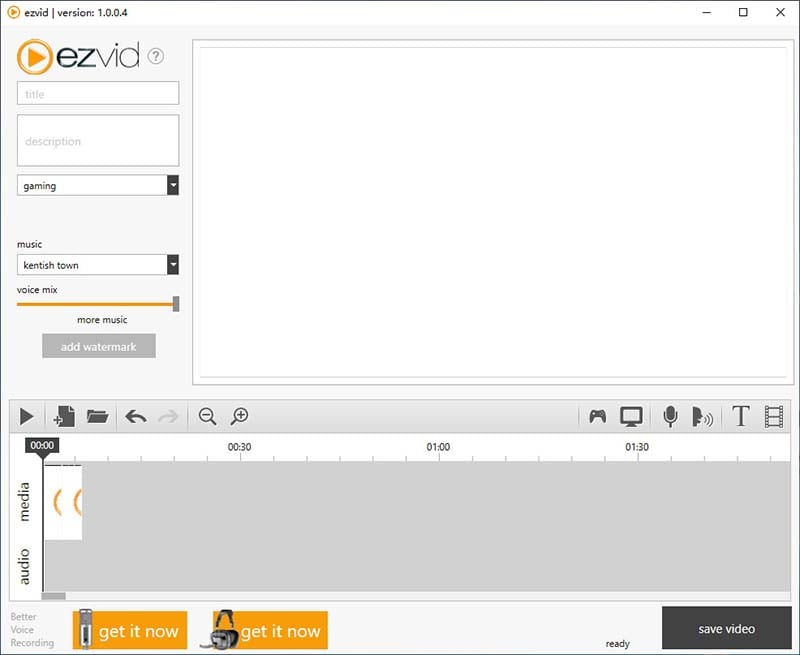 3. Click on "X" icon to stop or cancel the recording. Users can easily drag the videos to the program without recording. The recorded video will be automatically adjusted to the record duration of the length on its timeline. 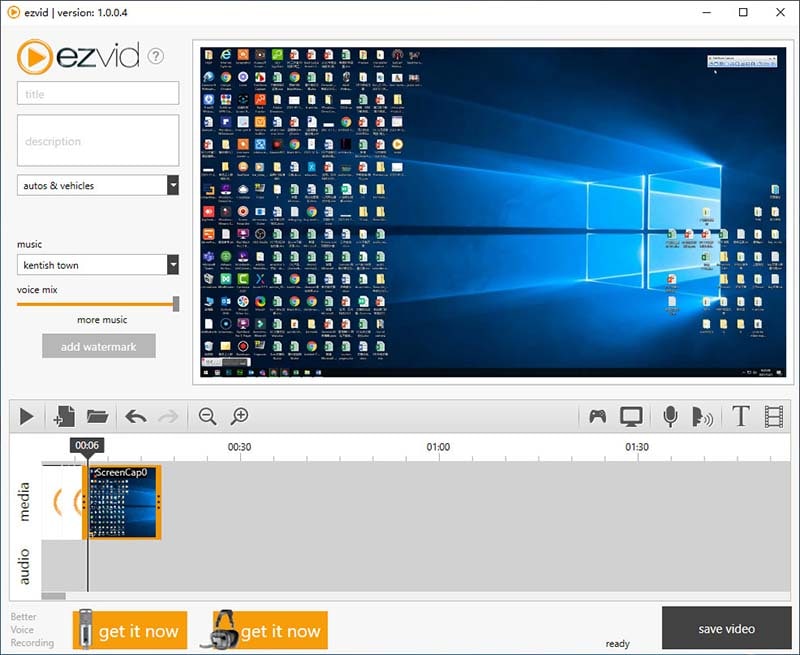 4. Click on “Record voice” icon to add commentary footage to your video.

5. Creators can also add background music to the recorded video from the list of songs on Ezvid screen recorder software's left sidebar. 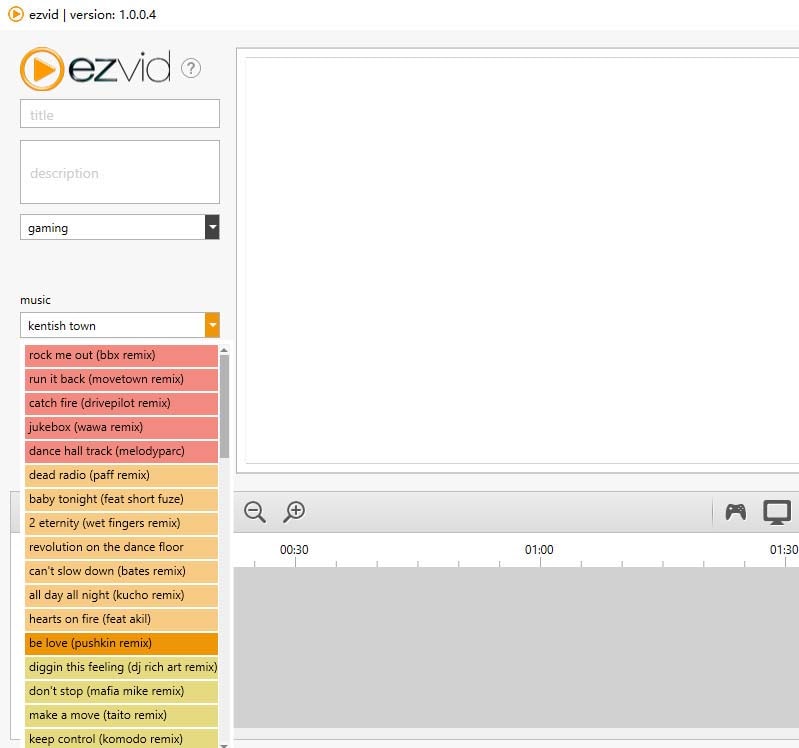 6. Trimming videos on timeline, cropping, adding texts or images are also supported. After completing editing, click the “Play” button to preview the video.

Pros and Cons of Ezvid

Every software strives to position itself as the most efficient, fulfilling and result-oriented product in the market. Our Ezvid screen recorder review helps you know what preference boxes this software ticks when screen recording or video making.

Ezvid is a freeware expanding in usage by various creators. However, before you begin Ezvid screen recorder download, check if your computer meets the following minimum system requirements.

Ezvid screen recorder lets you record anything on your screen at any time. Once you click on the “Record” button, recording your screen comes both hassle-free and quick. The screen capture function is perfect for gameplay recording. Another feature worth noting is the transparent capture, although it takes a toll on your computer’s performance. It consumes a lot of resources too.

There are several occasions when videos' messages fail to be obvious to the intended audience. Ezvid's audio and voice recording tools strive to eliminate this by letting you include either or both of your creations. Users can explore these features through voice-overs or narrations using the system audio or microphone. Again, most creators can decide and record quality audio separately or fine-tune it in the screen recording process.

This special tool is dedicated to game recording. This Windows software even offers guidance on how to capture games in the recommended mode. Ezvid offers detailed information on how to run the game in the specified mode. This screen recorder is popular among gamers who use it to screen record and screen capture their actions. It delivers to expectation as compared to other expensive software competitions in the market.

Facecam feature allows you to record your video along with other functions like voice synthesis. Speech synthesis makes an amazing computer narration for your video.

Ezvid screen recorder comes with the best in-built video editor you can ever come across. This tool allows you to add effects to your videos, rearrange the screen captures, add or change voice, make speed changes, crop, add texts, add image slides, and so much more.

Ezvid software is not only about creating and editing videos. You can also create slideshows with your pictures with this function. Making the slideshows is rather instant and easy with Ezvid.

This is especially important in demos when the creator needs to draw attention to the video's highlighted areas. The drawing function provides you with great drawing features that allow you to showcase your abilities. The superb screen drawing feature allows users to draw on the recording screen directly. The software's ability to record a region on the screen to get amazing screencasts and document your online world with ease also adds to this.

In cases where you would want to add music to your videos, recordings and slideshows, this feature becomes indispensable. Instead of searching around the internet or your computer for music to use in your videos, Ezvid provides you with free music.

Ezvid software is more powerful as a screen recorder rather than a video editor. But it doesn't support mac OS X may send some creators looking for the best alternatives. I would recommend you to try Wondershare DemoCreator, all-in-one screen video recorder and video editor that helps create your own videos on both Windows and Mac with ease.

DemoCreator is used to record computer screen and webcam for many vloggers, teachers and companies. It is really useful tool in creating video tutorials, classes and product demos with real-time screen drawing and audio narration. Download this software and follow the steps to see how it works.

1. Run DemoCreator after installation, click on the “New Recording” red button from the main interface.

Note: If you want to record computer screen and webcam with audio at the same time, remember to connect your webcam to computer and enable the microphone.

3. Tap on the big red button to start recording, the process will begin within 3 seconds. You can use the screen drawing and spotlight feature while recording.

4. Once you want to end the process, press F10 to finish. The video will be loaded in the editor, you can do basic editing or just export directly.

In this article, we've reviewed Ezvid screen recorder from detailed aspects, analyzed the pros and cons of this tool and listed out the steps to use this tool to capture screen. Also, we recommended an alternative tool DemoCreator to record computer screen and webcam as it comes with more powerful features. You can choose either of them from your own needs.