Two years ago, Skype added a feature that dramatically boosted the platform, Call Recording. Nowadays, with one click of a mouse, you can record a Skype video session and preserve the video for later review. Video or call recording feature has made the whole stuff enjoyable as you can share freely with clients or keep a hilarious moment you and your friends shared.

Recording a Skype video call session is easy and fast, and all participants are actively notified of the recording and are asked to save the recorded video or call at the end. But even though the latest Skype version 8.0 boasts of in-built recording prowess, you still need a third-part recording program that supports high-quality recording for all your audio-video calls. Let's now focus on how to record Skype video call on a laptop using the following ways.

Why to Record a Skype Video Call on PC

Several reasons may compel you to record Skype video call on PC. You may want to record a brainstorming session with colleagues so that no idea is lost to posterity and poor note-taking. Maybe you want to record guitar lessons so that you can review the new chords you were taught later. You may be a business person and want to keep in touch with friends and coworkers regardless of their location Skype video recording.

Call recording on Skype is cloud-based, and everybody on your call meeting is advised, through a spring up standard, when recording begins. This keeps anybody from being gotten unprepared during a call. At the point when a video call is recorded, everybody during the meeting is caught, just as any screens shared during the call. You can save and share this account for 30 days after the call was made.

In the time of E-courses, students incline toward the substance which is adequately appealing to make them adhere to the course. Along these lines, being a course educator or maker, you should consider a norm so your substance would be dismayed by the students.

Step 1. Make a video call on Skype.
Start a video call and once connected, click the Plus icon at the bottom right corner and select Start recording to initiate it. Then you and the other participants will get a message said you are recording the call. 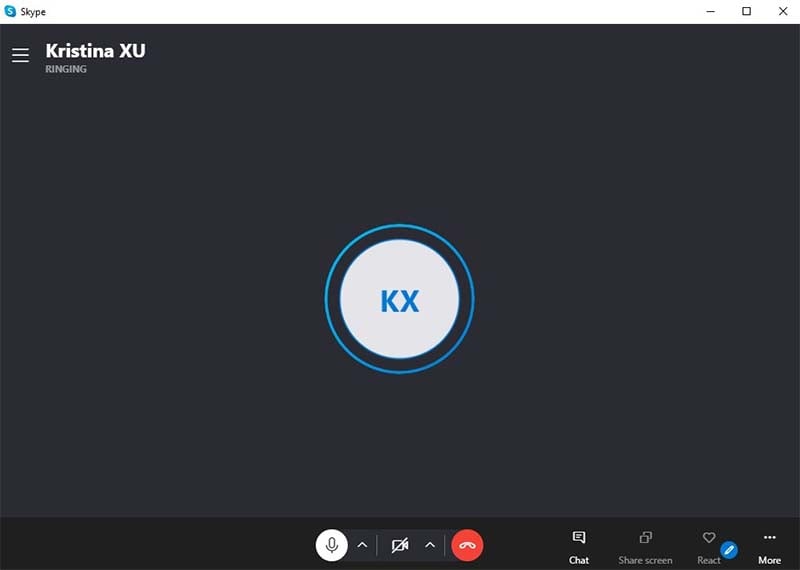 Step 2. Start/Stop the Recording
Start the recording by clicking on the button within the call and when you are done with the call, hit the Plus icon again, and select Stop recording. Alternatively, end the call and the recording will stop automatically. 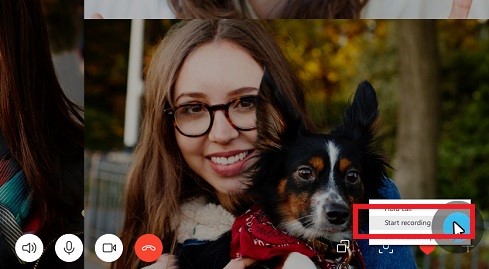 Step 3. Open the Recorded Video
After that, you can find the recording stored in the chat window. Click the Play icon to open it in a media player window. Now, the call recording is stored in Skype and you can access it within 30 days.

Step 4. Save the Recording
To get the Skype call recording, hit the three-dot icon above it and choose Save to Downloads. Then it will go to your Downloads folder. Or select Save as and set a specific folder to save it as an MP4 file. 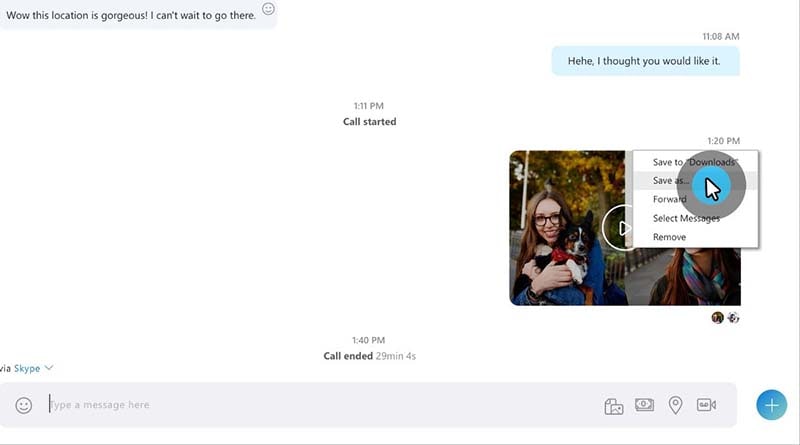 The implicit account highlight in Skype has a few drawbacks. Most importantly, you can't record Skype calls subtly since a message will spring up to everybody's screen once you begin recording. On the off chance that you neglected to download the chronicle; it would vanish a month later. Starting here, we suggest Vidmore Screen Recorder. In a word, Screen Recorder is the most ideal alternative to catch your Skype video and sound approaches Windows and Mac OS X. In such manner, to help you, we suggest attempting Wondershare DemoCreator for your instructive video as it has a recorder just like a supervisor that is inserted inside the product so you can have every one of the advantages in a stand-out toolkit.

The best part of the DemoCreator is that it can use your multi-core processor to the full extent which will eventually improve the performance and you can record the Skype video call or E-courses with 120 frames per second and in some cases, even more. The most useful part is for the teachers as they can record their sessions hassle-free with this software. Now, if you’re in search of a top-notch screen recorder that can also do live screen drawing, then Wondershare DemoCreator is here to provide you with a platform where you can do all your recordings hassle-free. To start with the recording, follow the steps below:

Step 1.Launch DemoCreator
In the foremost step, you need to launch it from your Desktop by typing the software name and open the launcher from there.

Step 2. Open Screen Recorder
In the next step, you need to open the recorder of this software, and to do that, hit the Start New Recording button from the starting windows and start the Skype call as well as follows:

Step 3. Customize Screen
Here you can customize your screen which is to be recorded. It includes various options for you to opt for before starting your screen recording. You can select the recording area, customize the screen dimension, include Webcam recording, select an audio recording, and much more from this window.

Step 4. Start Recording
In the final step, hit the Red Circled button, which will eventually start your screen recording. 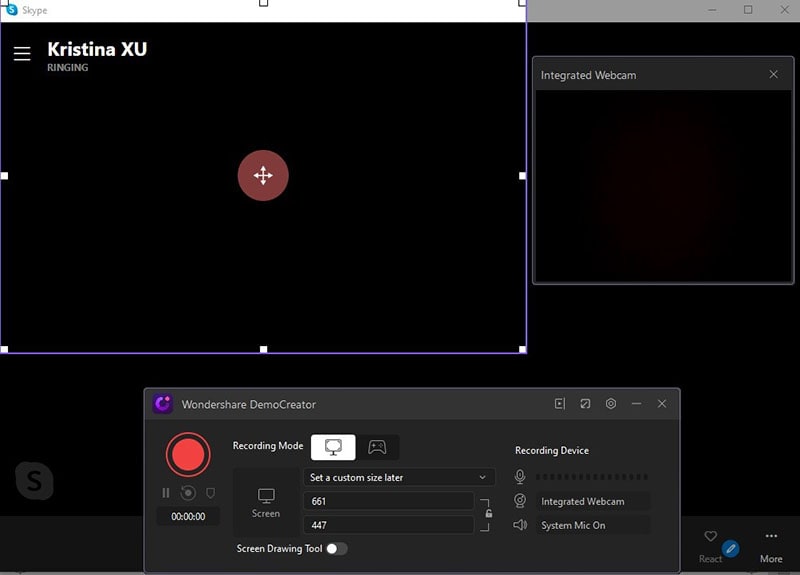 Step 5. Export Skype Calls
In the last step, you need to save your screen recordings to your desired format so you can have them in your system, in addition to that, you can also share them the YouTube so you can share them directly with your audience. Hence, to begin with the export, you need to click on the Export button in the top right corner of the screen as follows:

From there, you can give the desired name to your recordings as well as the format of your own. Also, you can set up the audio encoder of your own inside that Export window:

Now, if you want to share your Skype calls directly to YouTube, you can do that without any hassle just by clicking the YouTube menu bar from the Export window.

Can you screen record skype on iPhone?

Skype permits recording of both video and sound approaches an iPhone or Android gadget, so you can record significant gatherings and other significant occasions to put something aside for later review. The component is unfathomably instinctive to access and utilize, and it works the very same path for both significant stages. The best part is that the help advises all gatherings regarding the status, as well as accepting the account on their end. It's likewise exceptionally valuable for catching video guidelines and instructional exercises.

On the other hand, there are amazing video catch applications that permit you to record calls as well as catch any screen movement. For all Skype call recordings on iPhone, you can introduce various free screen recorders to accomplish the work for you. Many of them can catch the sound, alter the recordings, and permit you to put something aside for sharing. That’s why it's easy to utilize, as well, with insignificant exertion required from your side./p>

How long can you record on skype?

Skype has been a famous decision with regard to making on the web voice and video calls. This has been probably the most seasoned support of giving free telephone calls throughout the planet and essentially utilized by individuals during late occasions while everybody is at home and rehearsing social removing. Skype has been around for quite a while and keep in mind that its work area application is quite feeble, the portable adaptation is strong, and it upholds enormous gatherings with no ongoing breaking point i-e four hours for each call, 100 hours of the month, for nothing. The greatest length for a call recording is 24 hours. Longer calls might be parted into different documents.