How to Remove Watermark from Video or Photo?

Videos are considered quite the show maker of different occasions where their utility is described to a greater extent in this century. With all the technological advances we see around the world, video editing has developed into a very unique and robust talent that is being adopted by people around the world for displaying the exclusivity they can through developing a video. There are quite different versions of video editing that range from complete professional suites to simple mobile applications. Many mobile applications, being free, leave a watermark behind after the completion of editing, which diminishes the visual appeal of the video itself. This leads to the need to remove them from the video. This article presents different methods using video watermark remover through Wondershare DemoCreator that would help you sustain the visual appeal of the video that you have designed to display in the social media groups or elsewhere.

There might not be a direct tool available on Wondershare DemoCreator however, with such video editors in hand, the utility is not limited. There are several mechanisms that can be adopted with the aim of removing the video watermark. While comparing different platforms that provided the feature to remove video watermark online, Wondershare DemoCreator has its own way of dealing it with it. 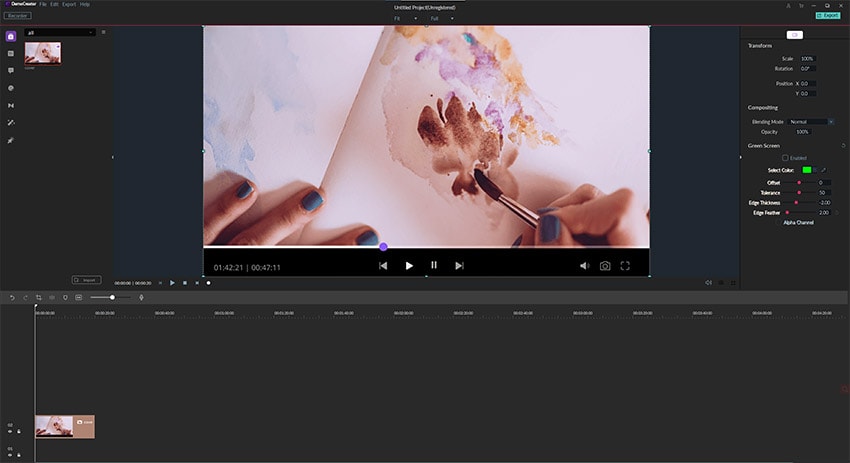 If we consider the convenience of removing watermarks with the help of this tool, it is quite straightforward that this method won't take long to be successfully implemented. By following the step-by-step guide, you can remove any watermark from the video in a matter of minutes.

After launching DemoCreator, import the media files from the option in the "File" sub-menu naming "Import Media Files."

After adding these files to the Media Library, you can follow towards adding these into the timeline by dragging them into it.

Following this, open the "Utility" tab on the side-bar menu and tap onto the "Mosaic" effect. Added to the inactive bar over the video to initiate the process.

As soon as you enter the thumbnail, a box appears on the preview screen. You can simply adjust the size and position of the box to blur out the thumbnail properly.

Step 5: Adjust the Settings of Mosaic

You can also tap on the Mosaic effects from the timeline and adjust multiple settings, including blur amount, shape, size, and much more. Tap "Ok" to conclude the procedure.

Method 2
Overlaying or Replacing the Watermark with Stickers

Another method that can be adopted over the question of how to remove video watermark is by covering it with something else that is more related and catchier to the video. It can be simply done by adding a picture into the video that can act as a sticker. For successfully adding a sticker on a video within this video watermark editor, you are to follow the steps described below.

With the video already present and imported into Wondershare DemoCreator, you now have to import the sticker from the local directory with a similar import feature and have it added on the timeline.

Set the duration period of the sticker to be as long as the original video so that it covers the watermark for the whole time.

Step 3: Adjust and Save

Adjust the position of the sticker from the preview box and save the video while setting all the important video settings.

There are many diverse options available for the users while considering removing video watermarks. The PIP feature from Wondershare DemoCreator can prove substantial in this case where the user can not only hide the watermark but actually add something much better that can help in enhancing the video. For successfully adding a picture within the existing and have the watermark hidden from the screen, you are to follow the steps which are stated as follows:

PIP feature is a very enhanced feature in video editing that allows you to layer videos. This allows covering such portions of the video that are not necessary and have nothing important to show. For this, the user has to import both video files with the "Import Media Files" options and add them to the timeline.

You can simply adjust the second video that you have added to the timeline by setting its size in the preview window. Have it dragged, which completes the process.

Step 3: Save the Video

Export the video along with the necessary video settings into the local directory.

Initially, it is important for you to import the necessary video into the timeline. After performing these simple tasks, you need to access the option for cropping in the "Crop Mode." Tap on the button depicting "Crop."

Step 2: Select the Area and Save

A set of boxes with white handles appears on the preview window. You need to simply select the area that you want to crop down to by adjusting the white handles. The watermark is thus simply removed. Following this, you can now simply export the video and save it in your local directory.

If you want to get enjoy all the features in Wondershare DemoCreator for free, click here to Claim a 7-days Free License.

This article has stated several mechanisms that can be adopted for removing video watermark. Wondershare DemoCreator is a very explicit platform to practice video editing on. By providing state-of-the-art, simplistic video editing tools, allows beginners as well as professionals to smother their skills and develop a keen output out of it. Users will surely learn different methods of removing watermarks after having a look at this article, allowing them to enhance the visual effects of their videos.

If you want to get enjoy all the features in Wondershare DemoCreator for free, click here to Claim a 7-days Free License.