You can learn how to edit Tiktok videos on a PC from this source. People congregate on Tiktok, a platform that is constantly expanding, and share brief videos there. More than 800 million users regularly used it to watch and post videos. Editing is the only way to produce more distinctive videos for the growing number of people who are getting involved. You’ve come to the right place if you want to learn how to record a voice-over for a TikTok video.

First, clear your mind of any preconceived notions about TikTok. It is not just for teenagers, and it is not like posting a picture on Instagram. You're going to laugh at how simple it is to create TikTok videos using Voiceover, I promise. You'll almost question whether there ought to be more steps because it is so simple.

TikTok videos are eye-catching and attention-grabbing, and they perform even better when they are part of a trend. And if you believe that silent videos or simple background music are sufficient, think again! The most effective videos are those that tell a story. As a result, the TikTok voice overs feature is ideal for telling your brand's story. A TikTok voice-over can add another layer of credibility to your video, whether you're launching a new product, advertising a promotion, or running a campaign.

In this article, we will also tell you about such tools which you can use to edit TikTok videos. Wondershare DemoCreator video editing software is a powerful tool for both amateur and professional video creators. It can be used to create stunning voiceover videos such as narration, explainer videos, and tutorials. The Wondershare DemoCreator app was created primarily for those who find creating voice-over videos difficult.

Once you've decided on a goal, you can think about how you'll measure your success. For example, your video may receive 10,000 views, but is this what you truly desired? Or did you really want 100 people to click on your website link? The first step is to clearly define your metrics, which will allow you to better analyze the success of your video.

Step2Plan the story of your TikTok video.

Every scene and sequence in your TikTok video should be carefully planned. Create a storyboard, select appropriate visuals, and keep in mind that you must channel your brand's theme, tone, and color once you've determined your target audience, you'll be able to craft the best story with the best TikTok voiceovers to capture their attention.

Step3Create a unique script for your TikTok voice over

TikTok voiceovers are what keep users' attention while eye-catching visuals can draw them in. However, confusing brand jargon and wordy sales pitches that sound like someone reading a grocery list are not what listeners want to hear.

Make the story in your script relatable so that the user will connect with it. Even though the phrase "once upon a time" has become a cliché, we still immediately think of "happily ever after." As a result, word choice can help you concentrate on better branding and word association for your TikTok Voice Overs.

The recording screen appears when you press the microphone tool. You can begin recording yourself by tapping or long-pressing the recording button. On this screen, you can also check or uncheck the option to keep the original sound. The best part is that you can easily record a voice-over in the DemoCreator computer screen recorder using your computer's connected microphone.

When you start recording, you'll notice that you can add a single voice over or multiple voice overs to different segments of the video by dragging the white bar at the bottom of the screen. You can even change the pitch and volume of your voice voice-over once you've finished recording, a play button will appear on the video. If you want to hear your voiceover, tap this. You only need to tap the back button to start recording again. When done, click Save in the top right corner. While speaking, be sure to pause regularly. Many presenters make the mistake of speaking too long with no pauses or breaks. But a brief 2-second pause will make your dialog easier for the viewers to digest, will help you catch your breath, and help you maintain a good speaking pace and tone. Also, be sure to pay attention to your posture and communicate non-verbally with your hands, facial expressions, etc.

Step5Edit the recorded video or upload your videos to edit

TikTok voiceovers can be added to a live or pre-recorded video. The steps are straightforward. After you've recorded or uploaded the video, select the voice-over option by clicking the checkmark on the right side. After that, you'll be taken to a recording screen where you can record the required narration. Wondershare DemoCreator, in addition to allowing you to import a large number of clips into its editor, also allows you to make the best enhancements to previously recorded content. You can use this software's timeline to add several eye-catching transitions to your video clips. 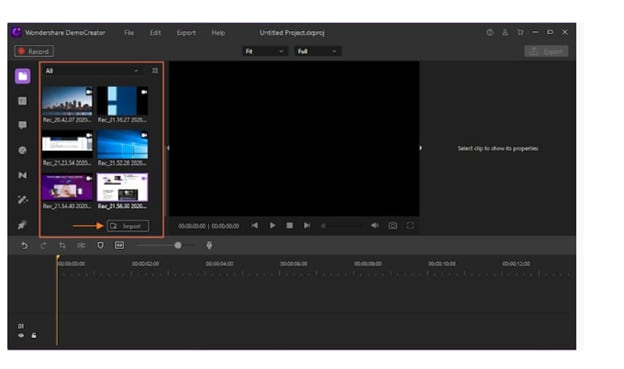 In addition to screen recording edits, this software allows you to import previously recorded content or download videos directly from your system. As a result, we can conclude that this software contains all of the necessary features, saving you the time of trying out third-party tools for even minor enhancements. 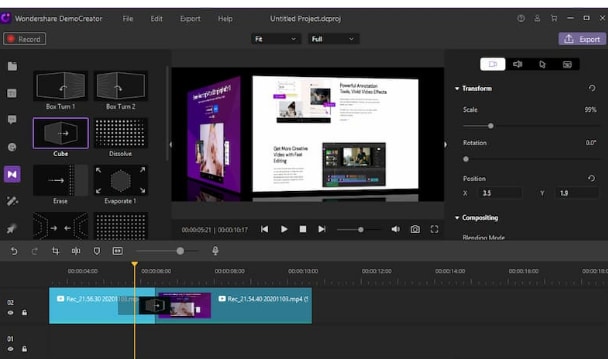 You can edit the video and add effects after saving the voice-over recording. After clicking next, publish your TikTok video as you normally would. Don't forget to change your video's settings and add a description. While allowing you to add a large number of clips to its editor, Wondershare DemoCreator also enables you to best enhance your previously recorded content. Within this software's timeline, you can easily add a number of eye-catching transitions between your video clips.

‍Before clicking Save, double-check that your recording is exactly how you want it. If you decide to make changes later, you'll have to redo the entire Voiceover.

Step8Export your Videos and Upload it:

Wondershare DemoCreator's video editor allows you to upload an unlimited number of recorded video files. The best part is that you can add a variety of format content for all three fundamentals: videos, audio, and images. You can input almost any format into this software, and for output, you can choose from MP4, WMV, AVI, MOV, GIF, and MP3 formats, making your output content globally compatible. 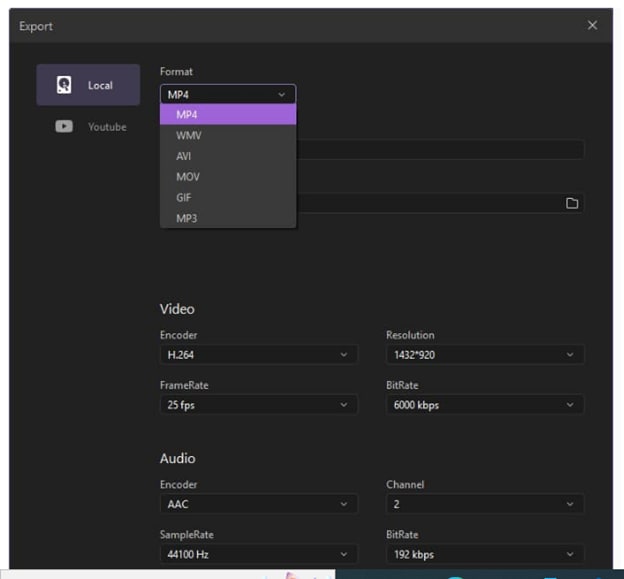 Tips for Including Voiceovers

After you've added your voice-over, you can add captions to your TikTok video to make it more accessible to everyone, including people with hearing impairments or those who prefer to watch in silent mode while sitting in a quiet library or train.

How to Add Robot Voice to TikTok

For instance, a text-to-speech tool serves as the ideal substitute for a real human voice artist if you want to add a brief voiceover intro to your voice or create an instructional video with all the steps narrated in a steady robot voice. Let's discuss the various ways to achieve the goal instead of getting too sidetracked by the arguments in favor of robot voiceover.

What is TikTok voice lady?

A new feature in TikTok allows you to change your text inside the app to a female voice speech. The ability to have an automated text speech read over your videos is nothing new, but the voice that is used to do so has changed, leaving everyone perplexed. Let's just say that if there was a place where people spoke as they did in American TV commercials, this would be it.

With the new feature, you can choose to have American women speak the on-screen captions aloud instead of men. The text-to-speech function, which enables users to convert their captions to automated speech, was first introduced by TikTok in late 2020. However, the actor whose voice was previously used has been involved in some controversy, which is why the new voice was chosen.

TikTok has several features that can help you make your content more interesting. Voiceover is one of these features that can help you polish your video content and make storytelling easier. TikTok is an enormous app that is spreading across the nation, no matter whether you're a singer or an artist. So, we've compiled all of the pertinent information to provide you with a thorough understanding of how to do a voiceover on TikTok. Wondershare DemoCreator is a notable and useful tool in this modern era that can create professional video lessons with a clear and intuitive interface.