How to Record Screen on Android Phone

If you are searching for the best screen recorder for Android phones, then we will recommend you to read this article. By the end of this article, you will be able to record your Android screen with multiple third-party applications, which you will choose by seeing their features, pricing, outcome quality, etc.

We all know that recording on a desktop screen is very easy, especially in Windows 10 and 11, but when we talk about mobile devices, especially Android phones, we have to search for the applications that provide screen recording services in Android phones.

In this situation, there can be a need or a time that prompts you to record the Android screen. For example, if someone is presenting the slides and we are viewing them on an Android device, then there could be a need to record those slides for nothing purposes.

It is just one example, but as we are more engaged with the Internet, these situations are becoming endless in terms of every aspect of life.

The Need for Third-party Applications

This morning I was viewing the control panel on my A02s, and I found that there is no screen recording option. Although, the whole Internet shows that there is an option to record the screen on Android 11. I concluded that this option is not available to my Android device natively because of the version difference.

Below, we have described the fantastic third-party applications that you can install on your Android device to record the screen for your ease. The applications are also listed with their features and pricing; you will choose what fits your needs from the below applications.

For your information, Android also has a native screen recorder that perfectly records any screen size on the Android mobile. Some people don't know this, and they directly navigate to the google play store to install the third-party applications.

Android 11 is full of features and ease. If you are a gamer and want to record the gameplays while playing the famous mobile application games like PUBG, Fortnite, Clash of Clans, Call of Duty, etc., then Android mobile also provides you this gameplay recording facility via Google Play Games.

The exciting news is that the feature is entirely free for Android users, and you can record Android gameplays up to 480p SD or 720p HD. The feature also allows you to record any type of mobile game and enable the front camera for commentary purposes while recording the gameplays.

All you have to do is. 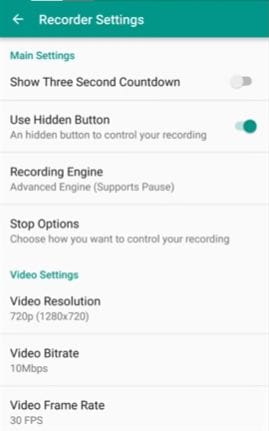 ADV Screen recorder is an excellent choice for you if you don't have the native screen recorder option on an Android device. You can quickly get the application from the Google play store.

The application is entirely free to use and is bundled with multiple features like recording with default and advanced engines, writing on the screen while recording, the user is allowed to use back and front camera while recording, and a lot more.

The application settings allow you to set the video resolutions (up to 1080p), bit rate (up to 15Mbps), and frame rates (up to 60fps). With the ADV Screen recorder, you can also change the microphone and orientation settings. You can also move the overlay options to any location on the screen.

AZ Screen Recorder also performs best from the hundreds of screen recording third-party applications on the App store and produces high-quality video results. The application comes in two versions. The free version includes advertisements in the application, while the premium version, which is $2.99, shows no ads.

The application adds a pop-up on the screen to record any time on the permission. You can record screens, live record videos, capture screenshots, edit them easily with the AZ screen recorder.

To use the application, open it, and click on the orange camera button to start your recording, then you can navigate back to the screen that you want to record.

The primary information to note is that, after you click on the camera button, a floating overlay button with multiple options will appear on the screen. You can pause/stop the recording from that button, open the front camera, and start the live recording with Facebook or YouTube.

The application allows you to view the saved items; you can also set the video resolutions (up to 2,220 by 1,080), frame rate (up to 60fps), bit rate (up to 12Mbps). Moreover, you can also record the audio alone and set the device orientation and time-lapse.

You can also select Mobizen Screen recorder for performing screen recording tasks on Android phones. The application efficiently records your screen and provides you with other multiple features like editing the recorder videos, writing on the screen, live video recording, etc.

Like the above-described applications, Mobizen Screen Recorder also includes a floating overlay button called the AirCircle. You can click on the overlay to start your recordings and stop or pause the video from the same overlay option.

The application also provides other fancy features like setting the screen resolutions (up to 1080p), frame rate (up to 60fps); you can also set the voice options through the audio and microphone settings. Mobizen Screen Recorder also allows you to set the front camera to record your face while recording something on the screen.

The application gives you two versions of it. One is free but shows ads repeatedly, and the other ad-free version is $3.99 a month or $31.99 for 12 months. 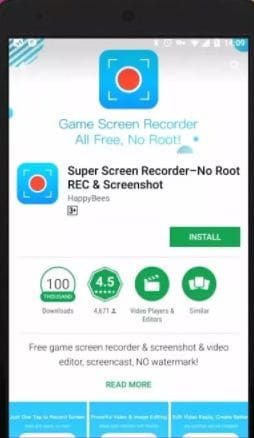 You can also install Super Screen Recorder from the App store. The application is very easy to use; it also provides a floating overlay that depicts multiple screen recording options. You are allowed to record the front camera, live streams, capture screenshots, edit the recorded video, etc.

Click on the red circle button from the overlay to start the recording, and if you want to stop or pause the video, you will tap from the same overlay menu. Inside the application, you can view your recorded items and edit them with the application's available features.

You can also add music, merge videos and images, compress files, turn videos into GIFs, etc., from the full edit menu. To set the resolutions for the videos, you can navigate to the application settings and set the resolution (up to 1080p), bit rate (up to 12Mbps), frame rate (up to 60fps).

The same window prompts you to set the video orientations and other good options. The application gives you two versions. One that is free but shows ads, and the other one is premium that allows you to add multiple voices adding ad dubbing features. Plus, there are no ads in the premium version.

Vidma screen recorder is another excellent option for you. The application allows the users to capture and record the screen and edit efficiently.

With the Vidma screen recorder, you can also record your front camera and launch the live streams and record them easily. The application is wholly cyber-secure and provides total privacy for your data. From the application's settings menu, you can set the recording resolutions, orientations, and other options.

With DemoCreator, you can do any type of editing on your videos and recorded videos. The application allows you to add annotations, captions, texts, graphics, transitions, music, and a lot more to your videos. You can easily cut and trim your videos with DemoCreator.

The best part of the application is that it can record the screen, microphone, and webcam separately and at the same time. With DemoCreator's wonderful screen recorder, you can also write and draw on the screen, pan and zoom, magnify the critical points, highlight, color, and copy them.

You can also choose the feature of fade-in and fade-out. The application is so heavenly for the gamers because DemoCreator provides separate built-in gameplay recording features with multiple options in it. Enough of knowing about DemoCreator lets deep dive into the practical implementation.

First, we will see how to record the screen with DemoCreator. 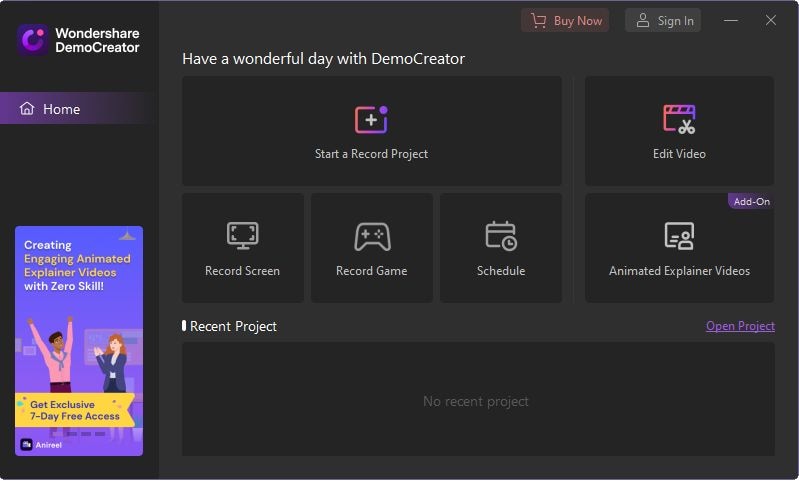 For the basic editing or getting started with DemoCreator editor. 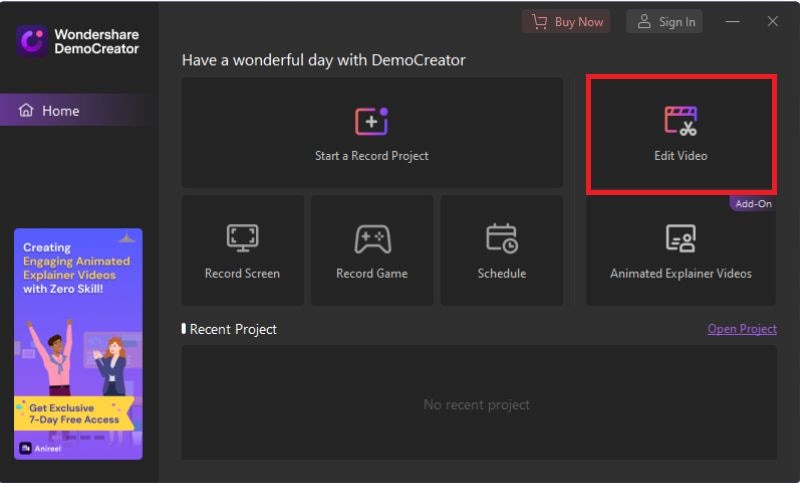 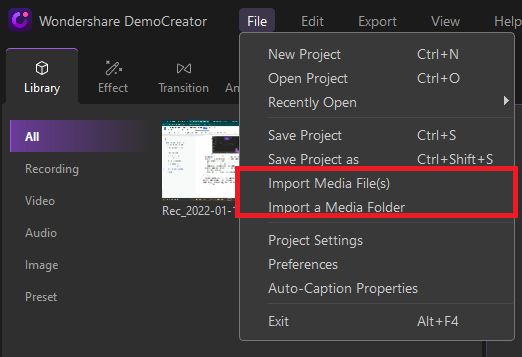 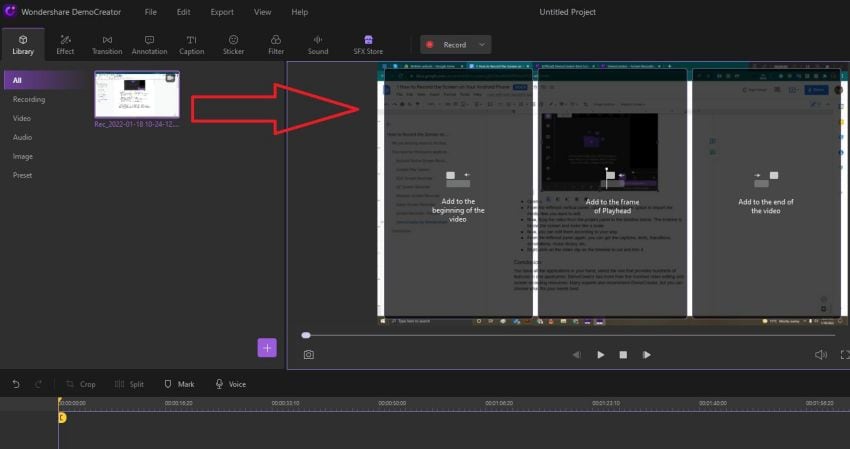