Fraps Review: One of the Best Game Recording Software

Fraps is one of the original game capture software. While it offers several decent configurations, it has fallen a bit behind on the times. It is still one of the best known software available for game capture, and is very easy to use, allowing you to record high-quality videos with ease using its accessible interface. Unfortunately, the developers have released very few updates since it originally landed on the market, and this has left Fraps lagging behind the competition. It is also lacking in helpful support documentation, and lacks any built in help options. However, because it has been around for so long, there are many user-run forums for support. While still worth looking into, it is certainly less flexible than the many newer, more up to date options.

One of the major issues with Fraps is the way it affects in-game performance. People have recorded about a 13% decrease in performance when attempting to record with Fraps. This is enough to require you to decrease your games settings from high, possibly all the way down to its lowest option, and you may even need to run the game at a lower resolution. Fraps, however, is remarkably consistent, increasing the frames per second by only about 9 percent, meaning that large jumps between minimum and maximum frame rates are nonexistent. Fraps also has no problems with latency when stopping or starting a recording, and does much better than the average game capture software does in this area.

Fraps is capable of recording 120 frames per second, but only comes pre-installed with 1 video recording codec. However, Fraps does not appear to actively compress recordings, eating up to 3.95 GB of storage for only two minutes of gameplay. Fraps does however impress with its built in benchmarking software, which shows how many frames per second you are getting in the corner of your screen. You can use this feature to measure the frame rate at any two points. You can save all of this information to a file and use these stats to adjust any settings that may be indicated in the results. 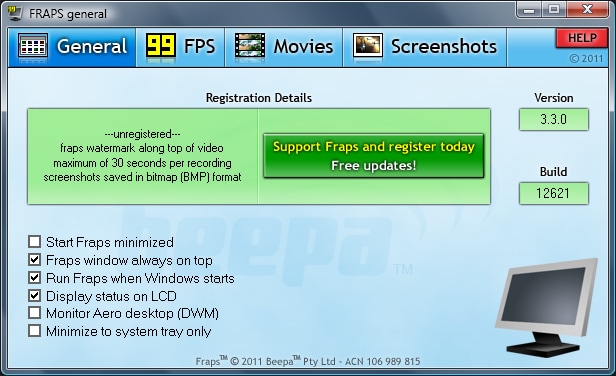 Fraps uses a proprietary codec to record high resolution videos on powerful enough machines. It can record up to 120 frames per second, and can record in resolutions up to 7680 x 4800. Because of the proprietary codec that it uses, playing the video is only possible through Fraps or ffdshow. The compression of the video is pretty low, resulting in fairly large file sizes, as previously mentioned. These two facts mean that video recorded in Fraps would need to be converted and compressed before sharing on YouTube or other video sharing services,

Fraps uses a lot of your system's resources, and therefore requires a powerful machine for use. Users recommend using a second hard drive to record high quality video with Fraps without making the game lag. Fraps does offer a full suite of options for optimizing your video quality, from bit rate, to frames captured per second, and recorded resolution.

Fraps, like any software, has a number of pros and cons. One of the best feature of Fraps is the reliable frame rate benchmark feature. It also features the ability to record in resolutions up to 7680 x 4800. A unique feature of fraps is its ability to capture screen shots at specific intervals, allowing you to create more dynamic and unique game play videos.

Fraps is $37.00 for the registered version, but they also offer a free, unregistered version. Unfortunately, the unregistered version only allows you to record 30 seconds at a time, which is lower than the free version of many other software packages. Additionally, Fraps eats up a lot of memory. As mentioned above, as a result of low compression rates, a 2 minute recording could take up to 3.95GB on your disk. One of the most important things regarding software like this is that it is frequently updated. Fraps also falls short here, having not been updated since February 20, 2013. Technology is a rapidly changing field, and lack of updates can make or break a software package.

To use Fraps, first you'll need to decide if the free version will work for your purposes, or if you'll need the fully registered version. Keep in mind, the free version of Fraps only allows you to record 30 seconds at a time, and places a watermark at the top of all recorded images. After you have made your decision, head over to the Fraps website and choose the version you desire, and download and install it.

Step 1: Open Fraps, either using the shortcut on the desktop, or if that does not appear, go to Fraps.

The default hotkey for beginning recording is F9. If that will not work for your purposes, click the box labeled "Video Capture Hotkey" and press the desired button. Make sure you choose a button that you will not need to use as part of the game you will be playing. Now, you can minimize Fraps, as it works while minimized through the use of the hotkey.

Step 2: Open the game that you want to record.

When you open the game you will notice a number in the top corner of the game window. This is part of Fraps' benchmarking ability. It is displaying the games current frame rate. When you are ready to start recording, hit F9 or your custom hotkey. Keep in mind, if you are using the free version you can only record for 30 seconds. If the frame rate overlay turns red, you will know that you are recording. To stop recording, simply hit F9, or your custom hotkey again.

Fraps may appear to be a lightweight, beginner's option, but it is fairly powerful. It has a simple user interface and many of the features that are required for basic game recording. It was clearly designed to run next to games and record footage to the best of its ability in the highest quality possible, but it is starting to lag behind more modern software packages, and its lack of updates are not encouraging. A few modern updates would make Fraps stand out among other software, but this so far has not been the case.