Another name for a screenshot is a screen capture or screen grab that shows the image on your screen's display. This feature happens with the help of an operating system in the software of the computer.

Another way of taking a screenshot is by taking a photo of the display screen of your gadget. Screenshots were a feature added to the software of the gadgets. So if you are looking forward to trying your hands on the best screencast software for Windows, make sure to read till the end.

Well, be it android or a Windows software, mac, Amazon kindle, or even iOS, all of this software has different techniques of taking a screenshot on the device. On the other hand, Windows has added another feature that is a tool that makes capturing screenshots possible, known as a sniping tool.

The snaps from this tool are saved as an image file or as an HTML page. Moreover, the utility is available with windows ten software and later was included by windows 7. So enlisted are certain best free screencasting software Windows 7 along with some paid options:

CamStudio is a free and one of the best screencast app for Windows program released by Microsoft Windows as an opensource screencasting system. The videos in this software are in the form of an AVI set-up. The language in which CamStudio is developed is C++, whereas CamStudio 3 developed in C#. After developing the software, there were certain speculations that the software had malicious software that created reports. In 2003 eHelp Corporation acquired CamStudio that already had a competing product called RoboDemo known as Adobe Captivate. 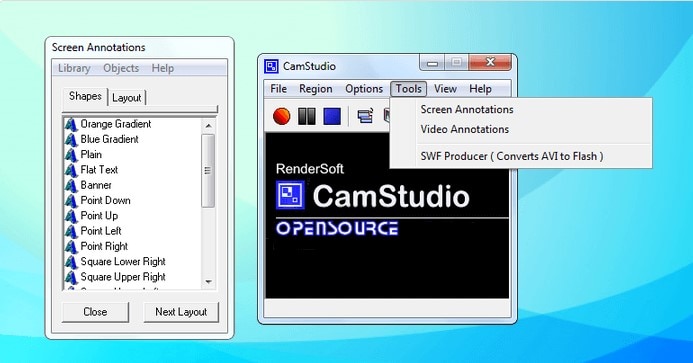 Developed by Apple Inc is this extensible multimedia framework that handles multiple formats of interactivity. Starting from a digital video, sound, or picture, Quicktime is capable of handling all formats. Created in 1991 for the first time now has the latest version known as Quicktime X. The latest version is currently available on Mac OS X. 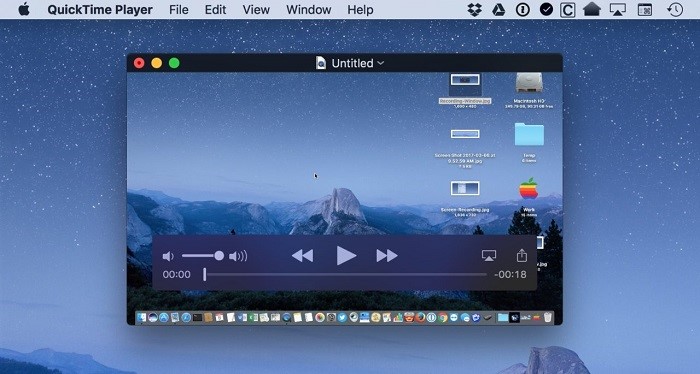 When it comes to speaking about Quicktime for Microsoft Windows, it is a downloadable standalone installation. The Quicktime software development kits are available with an Apple Developer Connection.

Whether it is a Windows operating system or macOS, it is available free of cost at both the operating systems. Other applications also rely on the Quicktime framework. In AppleScript, there is a feature where one can watch or play a movie in fullscreen mode. On the other hand, there is a license for Quicktime pro from Apple software.

Several new elements added to Windows 10 are optimizing the new touch option known as the tablet mode or something similar to Windows 7 or Windows 8 feature. Unlike the previous version in Windows, where the significant features had RTM with the release in the market, Windows 10 has other significant features that keep receiving ongoing updates that make the features more functional and user friendly. Specific updates still take up a lot of time and have a slow pace in talking about new features.

There are constant updates that Windows 10 brings to the Xbox application in the operating system. The games featured in the windows game bar are easy to stream in any Windows 10 device except smartphones. With a game bar, one can easily take screenshots of the games that they are playing. Specific keyboard shortcuts help the user to take necessary pictures when the game is playing in the background.

iSpring Free Cam is a new media recording software that allows the user to record a particular part of the desktop screen. It allows one to edit recorded videos to upload them later on social media platforms like youtube. Troubleshooting issues have a solution with iSpring Free Cam that helps solve the sharing issues of your screen. On this application, one can also learn how to use a specific app with a free tutorial. Unlike other written explanations, iSpring Free Cam gives you a video tutorial. 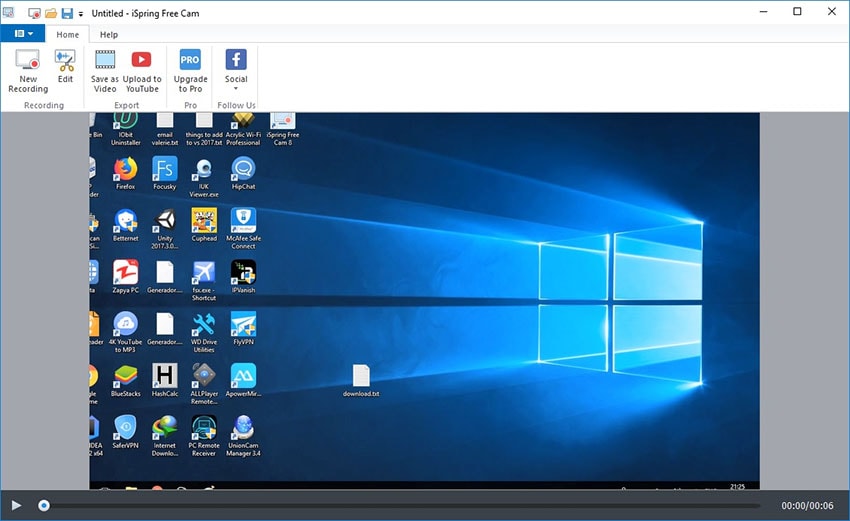 An advanced audio recording system is a notable feature that allows the user to highlight sounds with mouse indication. Noise removal, trimming of videos, and one-click upload to YouTube to make the application a trend in the new software era. One can also save recordings as high-quality videos. The only drawback with this software that one can note is, it has no webcam support.

Another free screen recorder is the Flashback express that allows the user to record short clips and create multiple engaging videos. This software has advanced features that make it more popular. One can capture videos or screenshots anywhere on the screen of the PC. Unlike other software, Flashback express allows the user to add webcam footage to any screen recording that you capture. 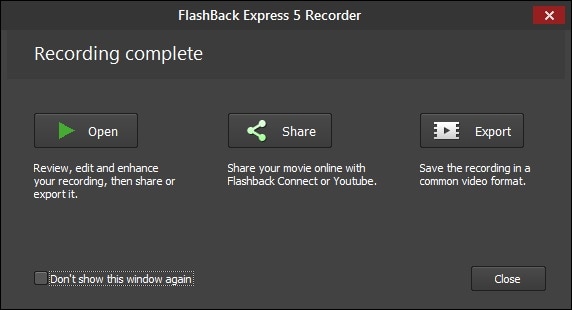 Wondershare DemoCreator is software that helps the user create or capture demos or tutorials that one can edit like a professional. No matter what the game is or how your screen is, Wondershare DemoCreator is sure to do wonders for your edited videos. For recording a video, all one needs to do is select a target area and set the frame. The microphone or the webcam simultaneously or separately focused on recording the target.

Along with the videos that one edits, some effects are an add-on. Whether it is cropping your video, changing the speed, or even adds annotations to the videos to create your masterpieces.

Once your videos are edited, the formats that you can save them are also multiple. All you need to do is export them to your PC and save them in formats such as MP4, MOV, or even GIF. With a thirty-day money-back guarantee, Wondershare Democreator is an excellent option that one can choose.

Icecream recorder is screen recording software that is easy-to-use. You can record any area of the screen that you need and later save it as a screenshot. If you ask what you can record, then there is no limit to the answer as starting from games to video tutorials, live streams of videos, skype calls, webinars, and so much more is easy to record. 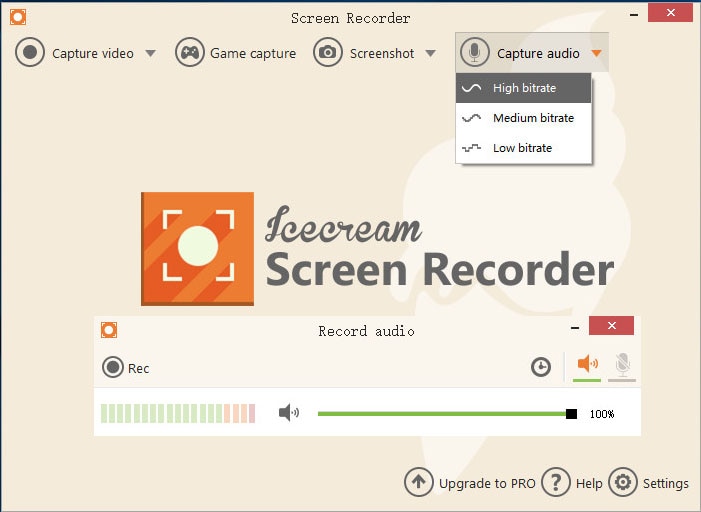 The record is available with audio and webcam facilities. Once the recording is complete, you can also leave a logo or a watermark to the video to make it look customized.

One may ask what makes IceCream Screen Recorder the best. Well, the features like the speed of the recordings, format change of the video post-editing, visibility of hotkeys during the recording, clipboard copies, and effects with the mouse click are some of the most noteworthy features that make the users satisfied. All one needs is a Windows, or an OS supported system requirement to the recorder to function.

With Camtasia, it is easy to create professional-looking videos effortlessly on a Windows software or Mac software. It is an application that is very quick to learn. One can start with templates or record the screen and start adding effects whether it is a no experienced video editor or a person using the software for the first time. Camtasia is sure to make your video look like a high-quality professional edit. Camtasia will undoubtedly make your viewers grow and give you more interaction if you are an upcoming influencer. 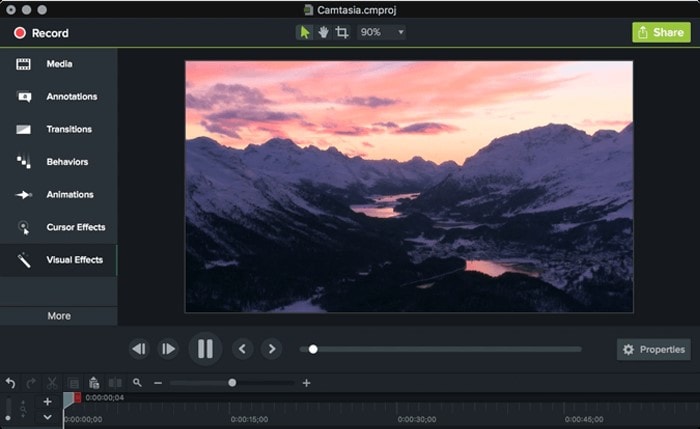 Simple text messages do not create that much of an impact on what videos do. Therefore, it is the best screen recording software for presentations, webinars, training, instructional videos, or even how-to videos. The new update in 2020 will make your video making experience even better and comfortable. Make sure you download and check out the trial period before investing in Camtasia.

OBS Studio, previously known as an OBS classic, is an open broadcaster software bundle with 32-bit and 64-bit versions available only for Windows systems. The software is available to use when you agree to use the program and its source. The new version, however, is available for macOS, Linux distributions, and Windows. The often broadcaster system is funded with an open collective.

The software is helpful in live recording streaming and written in C++ with real-time encoding and recording. Data transmission with Real-Time Messaging Protocol supports many pretests for streaming websites.

This is the easiest to work with or use desktop tool for screen recording that allows users to save the edited videos to standard MP4 files. With the use of its converter that is already built-in, one can convert the files with MP4 format into SWF, FLV, and AVI formats without causing any damage to your files. 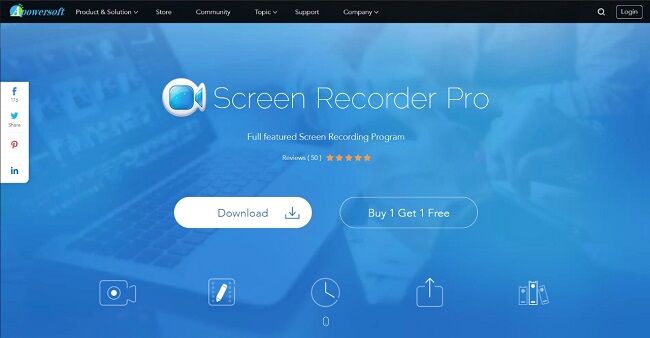 The entire activities that your desktop processes are empowered by the Apowersoft screen recorder that empowers users to make a screencast for a distinct section on the desktop that you use.

To achieve a video-in-video effect, one can also add on webcam video into the screencast. One can use the software for various tutorials, live chat sessions while playing video games, or streaming anything on a web browser. There are also multiple recording modes in the software that allows users to record the desktop screen's happenings. The record screen can also record simultaneously with microphones or audio systems or even both.

Hence, many effects and functions are available with the Apowersoft screen recorder in an acceptable price range. Not all software will have a similar price range, but it is evident that most software has a fixed prices range for the specific issue selected by the user. It is, therefore, evident that all check the price range before opting to buy. However, it does not apply to the ones that are free and have standalone installation.

The category serves as the default software for Microsoft Windows and is the default software for screenshot programs that come as a component of various Windows versions. On specific windows systems, specific screenshot systems do not function well. It's when media players fail to result in a black rectangle—the way the images by a method called hardware overlay. Specific computers that work without a hardware overlay that makes the programs work a little slower.

Overall, there is no way to extract a computer image back from the graphics card even though the software may exist for exceptional situations or particular video cards.

This screen recording software is mostly a time-saving process that creates more uncomplicated instructions and presentations even though the actual files are somewhat large. The screen recording action may sometimes jump instead of a smooth flow. Standard desktops are not that fast enough to play videos and also capture them simultaneously. Hence, the software is a must to extract the best among them and make them look professional at all costs.

There can also be specific copyright issues but are imitative works of the widgets and arts created for the software. No matter what the copyright is, screenshots are still under the belief of proper use. Hence, the best screenshot software you may use may be among the free screencasting or the paid screencasting software. Proper research before opting to buy any software program or even installation is a must.