How to Take Screenshots on Ubuntu

Research has found out that humans are able to interpret information faster if there is a visual medium. This is especially true when you take screenshots to show someone the step-by-step process of screen capturing.

While you may be familiar with taking screenshots on other devices, this article will explore all the ways in which you can take screenshots on Ubuntu.

Why you will need to take screenshots on Ubuntu

So, what are screenshots, and why do you need to take them? Screenshots are also sometimes referred to as screencaps, and they are an image of your screen. These capture your screen display so you can send them to others or use them as a reference.

Screenshots are excellent ways for collaborations. Now that everything is digitized, you can use screenshots to explain things, show appreciation or point out mistakes rather than writing lengthy paragraphs. Even rather than narrating a whole story again, all you need is to send a screenshot of the chat to the other person to understand the situation.

Lastly, screenshots can also be helpful if you are trying to track down some problem with the software or your computer. You can take screenshots of the error messages and send them to the Support Team or Tech team. This is very helpful, especially if you have little idea about the software or the error it relates to.

Using keyboard shortcuts for taking screenshots in Ubuntu is probably the easiest and most straightforward way to get screenshots. If you are working on some high-end video editing or photoshop, we highly recommend using the keyboard shortcuts to prevent your system from slowing down, and you can take all the screenshots with a few flicks of your fingers.

Here are some of the ways to take screenshots in Ubuntu while using the keyboard shortcuts:

So, let us begin with the easiest first. You can take a screenshot of the whole screen by pressing Print Screen or Prt Sc on your keyboard. This will take the screenshot and automatically save it in the Screenshots folder in the Pictures directory.

How to Capture Part of the Screen

In case you do not want to capture the whole screen and only want to take a screenshot of a part of your screen, then carefully press Shift and Print Screen together.

This will help you capture specific areas on your browser or a dialog box without capturing unnecessary things on your screen.

Taking a Screenshot of the Active Window

If you are a regular computer user, you might be used to working on your PC with multiple tabs and windows opened at once. Now, if you are taking a screenshot of a screen with such clutter and mess, then the screenshot would not be as effective as you like.

Here is how you can screenshot the active window on your screen to solve that problem. This only takes the screenshot of the window you are currently working on.

Press Alt and Print Screen to take the screenshot of the window. This picture will then be saved to the Pictures directory.

Capturing and Saving Screenshots to Clipboard

While the above ways are ideal for capturing screenshots and saving them to your computer to use them any time you want, sometimes you might also need to use a screenshot for an email without saving it to your device.

By using any of the above ways, you can take screenshots by pressing just a few keys on the keyboard.

How to Take Screenshots Using the Ubuntu Screenshot App

While keyboard shortcuts are probably the easiest way to take screenshots, some people just don’t prefer it that way for various reasons. One of the reasons is not remembering the shortcut.

So, another way to take a screenshot is using the Unbuntu screenshot app called Screenshot.

These options usually are not there for the keyboards shortcuts. You can also edit the screenshot by adding a drop shadow, borders, etc.

Here is how you can take screenshots using the Screenshot app in Ubuntu:

With the screenshot app, you can take screenshots anytime you want and also make them presentable.

Take Screenshots on Ubuntu Through the Terminal

The truth is once you realize the power of the command line, there is no way you can ever go back. And taking screenshots using the shortcuts and the keyboard shortcuts can be tedious if you are used to the terminal way.

Taking a Simple Screenshot of the Screen

To take screenshots on Ubuntu using terminal, follow the steps below:

The -d stands for Delay, and the 3 represents the number of seconds you want to delay the screenshot. You can even change it to 5 or 10 as you like.

If you just want to capture the current window using the terminal and not the whole screen, then use the command “gnome-screenshot -w” like that shown below:

This will only capture the active window.

This way, you can take different types of screenshots by just typing in the commands, or you can simply copy-paste the commands from here.

How to Capture a Photo From Video in Wondershare DemoCreator

While we are talking about taking screenshots, we can not miss Wondershare Democreator. Democreator is an excellent tool if you want to record quality videos and then edit them. If you have not heard of Democreator before, here is all you need to know.

Wondershare Democreator is a quality screen recorder that will help anyone record their screens and edit videos. The screen recorder offers camera overlay, frame adjustment, and even allows you to select the portion of the screen you want to record.

The video editor tools are very powerful and easy to use. With an interface similar to the MS office suite, DemoCreator can be used smoothly by professionals and beginners alike. One of the notable features of DemoCreator is the large array of transitions, effects, annotations, emojis, and stickers that you can add to your video. This almost gives it that professional quality. Apart from all that, you can export all your edited videos anywhere you want. You can connect your Youtube channel to DemoCreator and post there directly.

How to Capture a Screenshot from a Video in Wondershare DemoCreator

Capturing a snapshot in Wondershare DemoCreator is extremely easy. You can take pictures from any video you like. This feature will also allow you to take screenshots from a screen recording and save them.

Follow the steps below to take photos from a video in Demoreator:

Before beginning, make sure you have downloaded and installed Wondershare DemoCreator from its official website. You can choose either the Windows version or the Mac Version depending on the OS you are using.

Step 2: Add the video to the Media Library 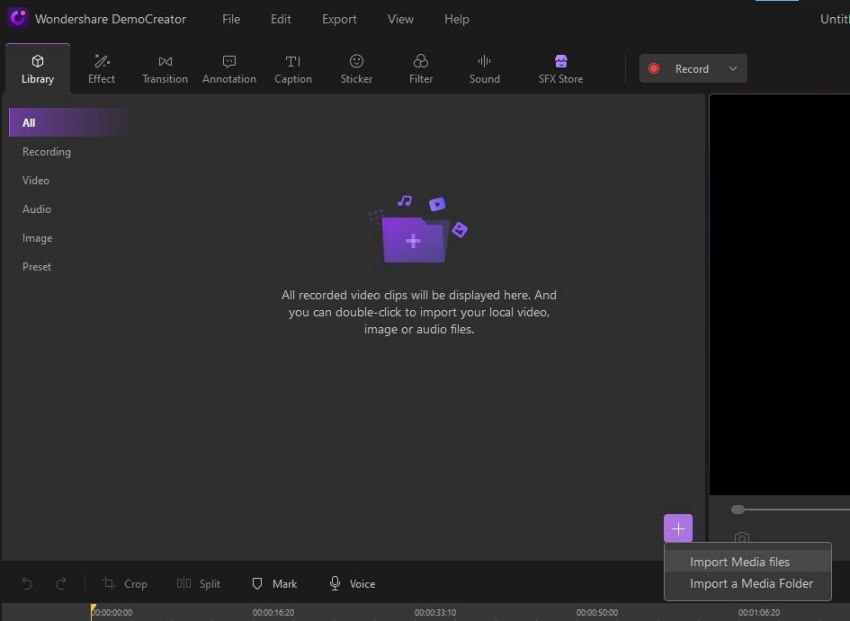 How to Record Screen with DemoCreator

Suppose you are preparing a presentation and would like the other party to know all the details so that a screen recording might be a better idea. While screenshots are great for showing the step-by-step process, a recording might be more explanatory, walking them through the whole process.

Wondershare not only allows you to capture screenshots in videos but also allows you to record your screens along with a camera overlay and voiceover function.

You can record your games, informational videos, or even fun Youtube videos for your social media family.

Here is how you can record screen using Wondershare DemoCreator: 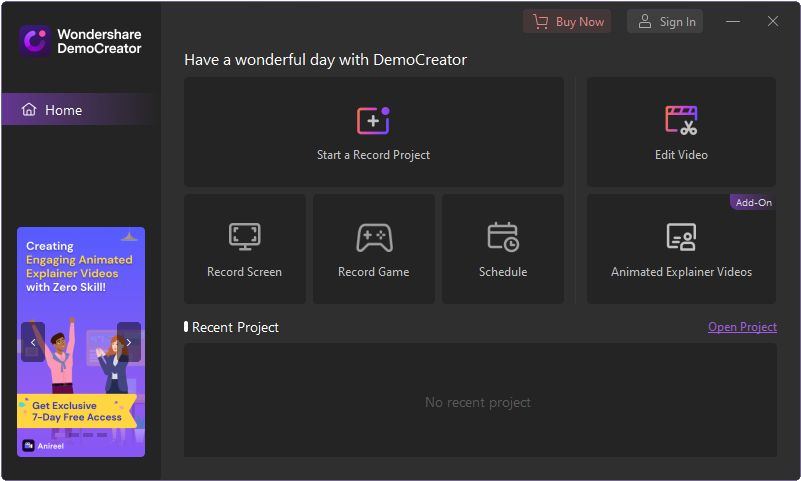 After opening the video in the editor, you can also take screenshots from the screen recording. 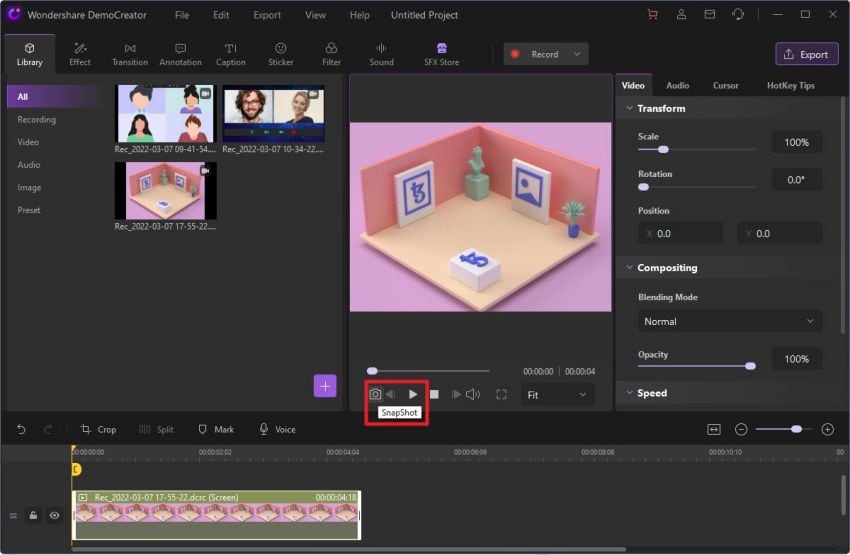 Hopefully, one of the methods above will help you get the work done. And in case you can not find the solution you need, you can always use third-party apps like Wondershare DemoCreator, which allows you to take screenshots as well as record the screen.

How to Capture a Photo From Video in Adobe Premiere Pro 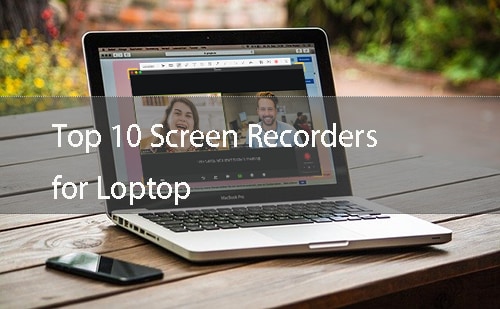