For such users, there are options online to screen record their activities which do not require the users to download anything yet fulfill their screen recording needs. The screen recorders available online also provide more or less the same features as that of their downloadable contemporaries. They offer customization along with different video editing tools which help in creating the best possible output. The content created can also be shared in the form of a link or can even be downloaded as per the needs of the users. In some cases, they also offer the ability to share on social media. Here are a few online free screen recorders and how they can work.

Recording a screen in modern times has become a task which is normal and done by many people. It is a way to add a demonstration to the explanation of a problem. It could even be a way to record and explain a procedure to one of the contacts. The task used to earlier require some third-party software for recording the screen on windows. This would be a burden in terms of cost and also for a person who is not technically sound, a little difficult. Windows 10 though does come with a solution that has been installed already and it isn't something most people are aware of. Here we give you a tutorial on how to use Windows 10 screen recorder no download required.

Step 1: For starting this process, it has to be ensured that the Game DVR has been enabled. In most modern PCs, it is enabled although a few of the earlier ones did not have the feature enabled. Then the user needs to open the Settings app and go to the category "Gaming". The first page here has a "Game Bar" which has a toggle "Record game clips, screenshots and broadcast using Game bar". This toggle needs to be turned on.

Step 2: Further, the user also needs to check if the "Start/stop recording" shortcut in the "Keyboard shortcuts" part is enabled. This is going to enable the use of a shortcut for recording and stopping the recording. The default shortcut which is given is Win+ Alt+ R however it does have the option to be changed as per the preference of the user. 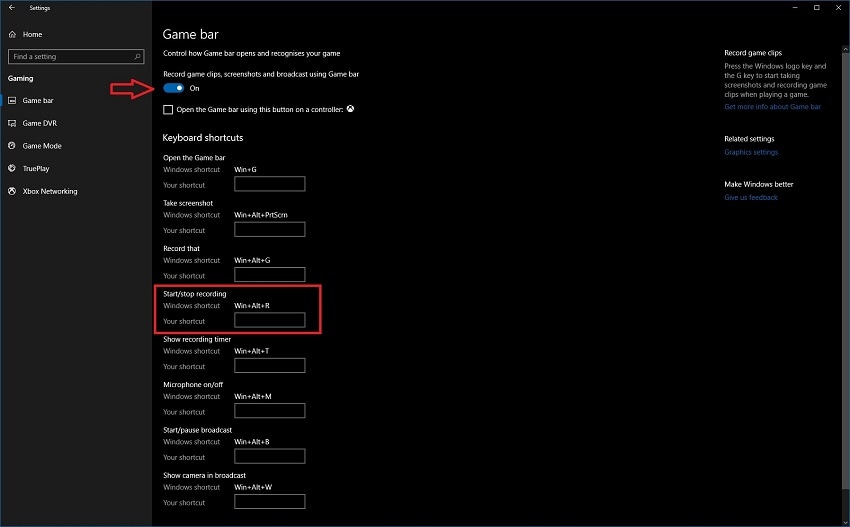 Step 3: After this, the Game DVR page needs to be switched on using the left navigation menu. This also has the option of changing the settings particular to any feature of recording. Further scrolling down on a page would enable the user to control the video and audio settings of this recording. There is a toggle button here which says "Record audio when I record a game". Once this is turned off, all the audio recordings will be disabled. If the toggle is on, the user can use the button which says "Turn on the mic by default when I record" for controlling where the recording is enabled through a microphone. This is particularly useful for live voiceovers. 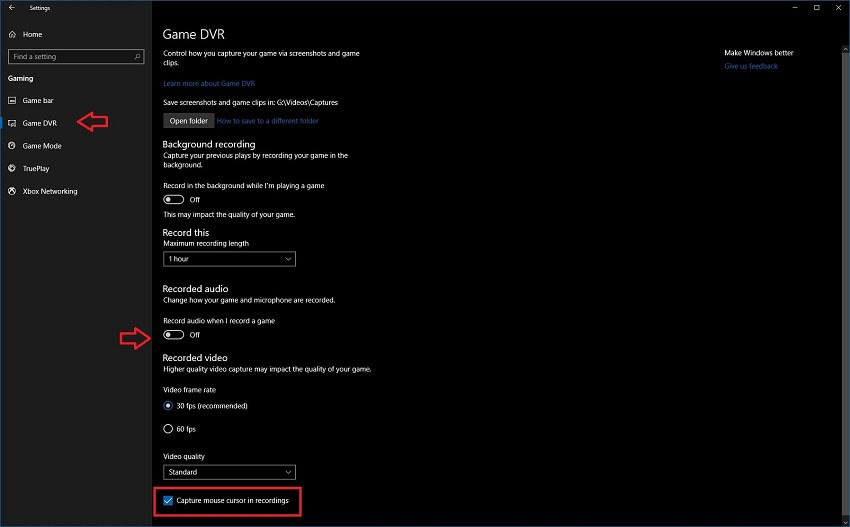 Step 4: After the settings get finalized, the recording can begin however the process does get a little difficult because the feature is a game based one. For making Windows understand that the user is in a game instead, a window needs to be open on the desktop. Any dummy app can be used for starting the recording. 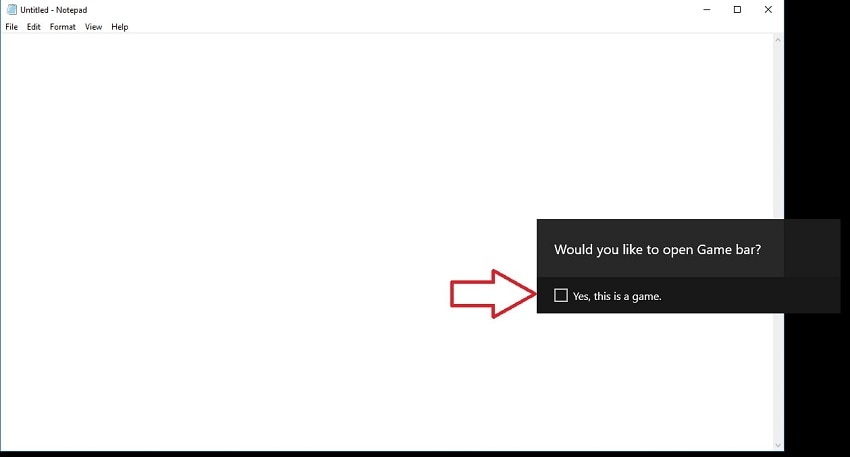 Step 5: The recording gets active when there is a small timer that appears on display. Here, the microphone settings can be adjusted, and also the recording can be stopped. After this is complete, there will be a video in a folder which is indicated by the Game Bar settings page which is a default setting. This is where the videos save inside the videos folder. The beginning of a recording does take a few seconds. 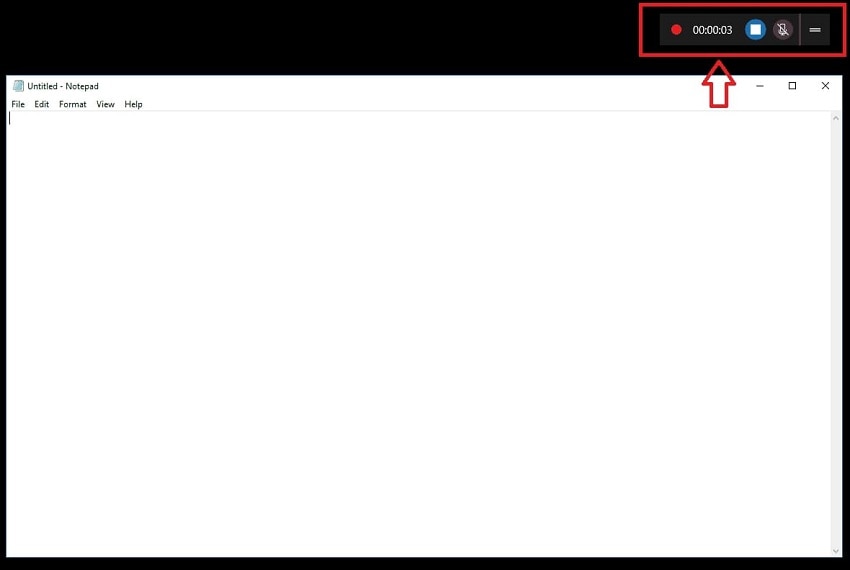 The loom is a video messaging online website which is meant for the users who do not want to convey a message by typing it out and instead want to send it through a screen recorded video. This is among the most popular ones with over 4 million users and it is popular among the corporates who want to save their time by using this online screen recorder no download website instead of typing a long and arduous email. 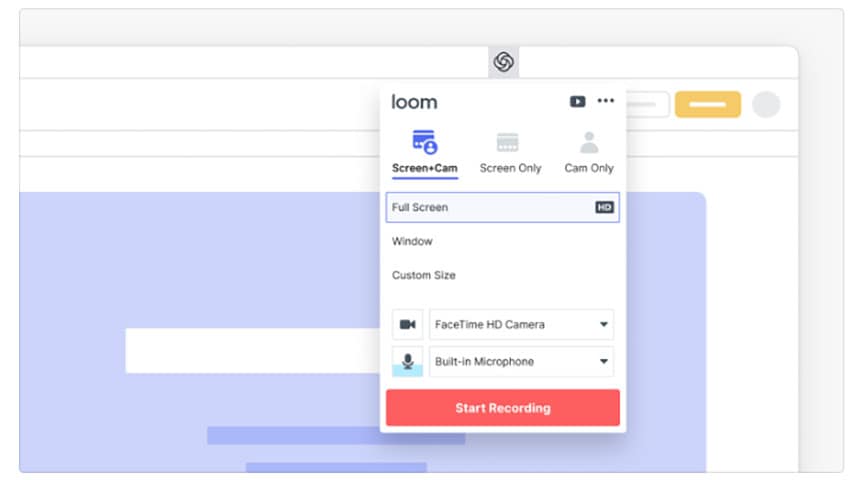 For the corporates, it helps in saving time as it takes away the time which would be required for a meeting and presentation and instead record a video and add your voice to make it equally effective. This software is offered for free and therefore saves money and time. The software doesn't also force the need for costly video recorder software to be downloaded and instead does every work the downloadable screen recorder can do.

Screencastify comes in the form of an online extension for chrome and is among the most popular extensions with over 12 million users. The most important feature of Screencastify is that it is extremely easy to use and offers one of the most understandable interfaces which can be used by everyone. This is the biggest reason for its popularity. It offers a lot of editing and sharing options which make it among the most sought-after screen recorders. 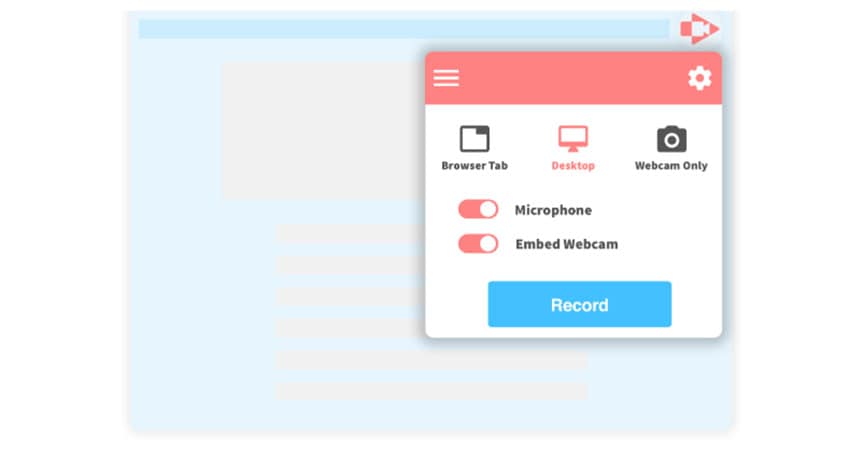 Another thing that goes in the favor of Screencastify is the fact that it is free. Getting so many features for free makes it certainly a better alternative to the downloadable software because it offers so much without the cost and complexity of a downloadable screen recorder. There is also the option for narration and use of the microphone to record audio in addition to all the editing features which Screencastify offers.

Vidyard offers one of the easiest ways of screen recording and especially helps in the creation of more engaging client presentations. This is a professional tool which helps in creating video presentations for the clients and colleagues alike. This offers the feature of unlimited hosting and sharing of videos and adding these videos to emails and websites. Another key feature is that it is free and also ad-free.

Vidyard also helps in adding existing videos to the screen recorded ones as it has the screen and webcam recorder. The videos can also be tracked which enables the user to see who has watched the video and for how long has it been watched. Some of the biggest companies in the world are using this because of its effectiveness and what if offers in comparison to the normally downloadable screen recorder. Sharing of videos takes place through embedded links.

DemoAir is an easy and free add-on Chrome extention record your screen and webcam to create a video message for better communication. With DemoAir, you can record video messages of your screen, camera, microphone, or both, easy-to-edit your videos and share videos. Create instructional videos by recording your tab, whole screen, or webcam. Make it personal by adding your face and voice; auto-save to Google Drive. You can quickly share your videos and watch anywhere. DemoAir offers you an efficient and time-saving way to communicate with your colleagues, students, teachers and partners expressively.

The online no download screen recorder option is one that gives a lot of flexibility to the users who do not want to specifically be involved in tutorials and gaming videos . This provides an efficient alternative and saves on the finances. This is particularly deployed by corporates and other people who are looking to record videos for sharing of information or presentations in some cases. The above alternatives have been used by various users to good effect and with the world of the internet growing manifolds, it is likely to grow even more in the future with these options becoming more common. In case any other online portals can do the same job, do let us know.