How to Record Screen on Your iPhone

This restriction means that there are some iPhones that may not support the use of the screen recorder feature. And since this feature can also be limited in various ways, we thought we'd share with you some third-party screen recorder apps for iPhone. These apps can be installed on the iPhone without having to jailbreak the device and they give you that extra punch when it comes to iPhone screen recording.

Let's begin with how to use the in-built iOS screen recorder.

How to Record iPhone Screen Directly

To record the screen on your iPhone directly, follow these simple steps;

Step 1: Begin by turning on this feature in the device's settings. To do that, go to Settings < Control Center > Customize Controls and then tap on the plus sign next to “Screen Recording”

Step 2: Swipe up from the bottom edge of the screen. If you have an iPhone X or an iPad running iOS 12 or later, swipe down from the upper-right corner of the screen.

Step 3: Long press the recording icon and then tap on the Microphone

Step 4: Tap “Start Recording” and wait for the 3-second countdown

Step 5: To stop the recording, tap on the red status bar at the top or the red-stop recording icon

While you can use the steps described above to record the screen on your iOS device, some apps are designed to improve the process. The following are some of the most effective apps to choose from; 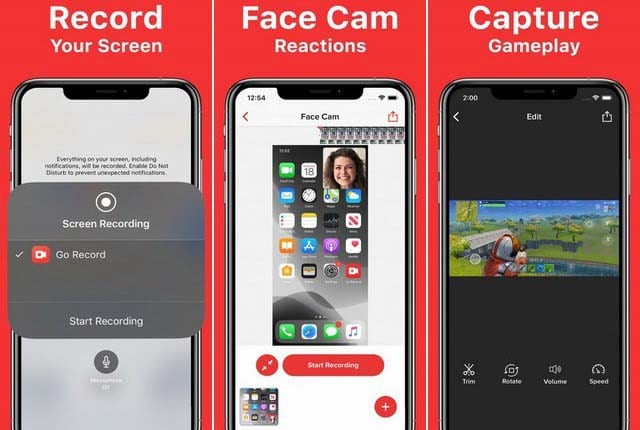 This is just one of the many basic editing tools that can help you further enhance the video that you create. For example, the editing tools give you control over little things like the ability to adjust the face cam size. You can also very easily add commentary with the video, allowing you to easily create simple video tutorials.

The downside of using Go Record is that the free version comes with a lot of ads. You may even have to sit through a few of these ads before you can begin recording the screen.

To begin with, Screen Recorderº is very easy to use. Once it is installed on your device, all you have to do is tap on “Start Recording” to begin recording the screen. You can also add a face Cam recording to the screen recording and create a video with commentary.

One the video has been recorded; you can use the in-built video editor to make as many adjustments to the recorded video as you want. Some of the options that you have when it comes to editing the recording include changing the video speed, rotating the video anyway you want and even adding various filters. You can also very easily adjust the quality of the resultant video and even change the recording settings to get the video just as you want it to be.

The DU recorder is an iOS app that you can install on your device for the purpose of recording the screen. While the screen recorder is functional, this aspect of the app is not necessarily the strongest. It can make simple recordings, but you don't have too many options when compared to the other apps on this list. 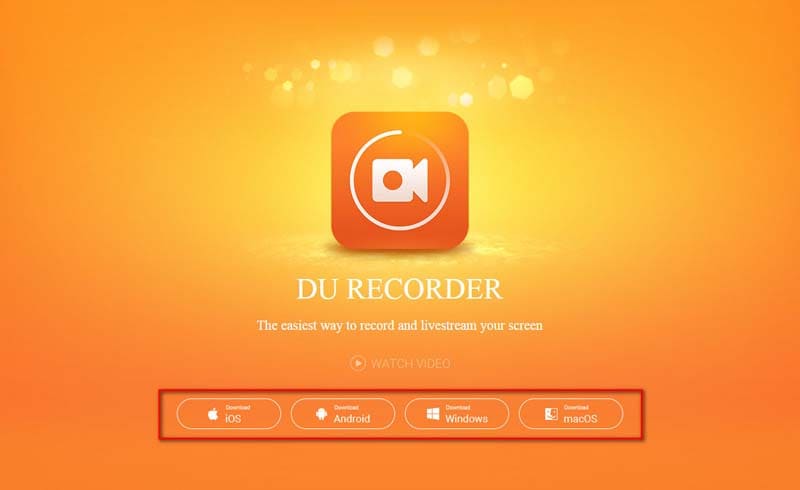 But what it lacks in great recording features, DU Recorder makes up for in post-production. You can use its full suite of editing tools to edit the recorded video or any other video that you can import into the program. But perhaps the best feature of the DU recorder is that it allows you to live stream videos to video sharing platforms like Twitch, YouTube and Facebook. This is one of the main reasons why the app is popular as a gameplay streaming tool.

The downside of using this app is that any video you record using this tool will have a watermark. You have to pay to remove the watermark from the video.

Record It is another option you have when you can't use the in-built iOS recorder. This app has all the bells and whistles to facilitate the recording of the screen. For example, you can use it to record both the screen and audio commentary. You can also choose to add a third-level of recording by adding the front camera video into your project. 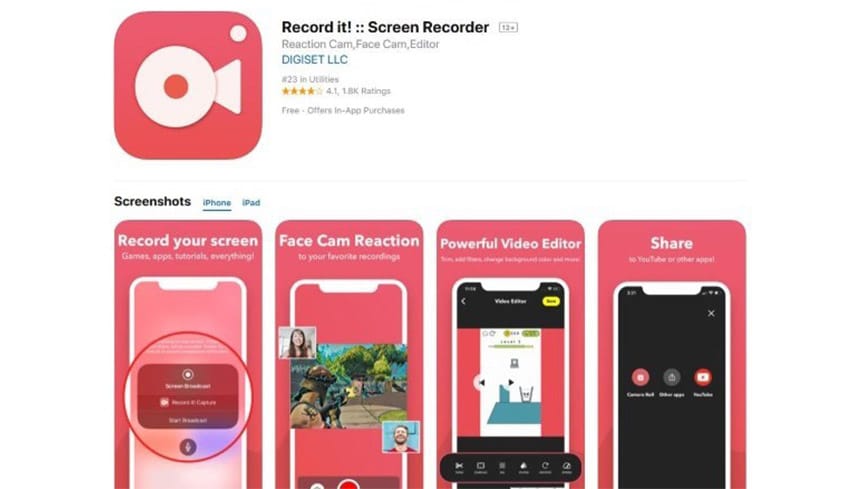 For these reasons, this is one of the most effective tools that you can use when you want to record video tutorials for YouTube and other social media sites like Instagram. You can also import old recordings from the camera roll and other sources. You can then edit the videos in numerous ways including adding video reactions, narrations and even annotations on to the video. The app is free to download from the App store although you may need to pay for the premium version to access some features.

CoolPixel is another great app that can be used in place of the built-in screen recorder in iOS devices. Like most of the apps we have seen on this list, it is available on the App Store for download for free. It has a lot of cool video recording features allowing you to capture both the video and audio. You can also add the front face camera onto the recording process. 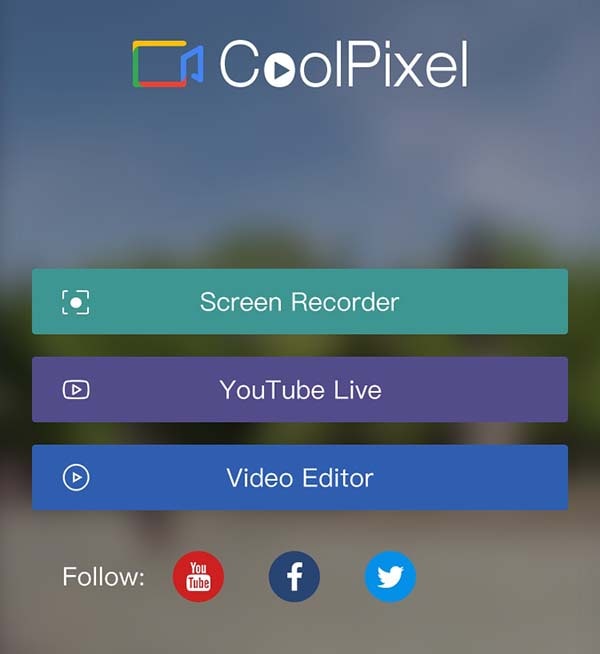 CoolPixel also comes with a number of editing features that can help you bring your video to the next level. Once the video is recorded, you can add subtitles to the videos, drag combinations and cut sections of the video you would like to remove. Despite the fact that it comes with so many additional features, it is very easy to use and guides you through the process of editing your screen recordings.

These editing features make CoolPixel one of the best screen recording apps for gameplay and tutorial recording. It is flexible, easy to use and highly effective, allowing you to create high quality videos in a matter of minutes.

Your iPhone is a versatile tool, allowing you to do a lot of things at once including taking high quality videos and shooting high quality videos. The introduction of the screen recording feature is just an additional level that your iPhone can prove useful in your day to day life. If you for instance run a YouTube channel that provides viewers with tutorials on how to do something, being able to shoot those videos on your iPhone can eliminate the need to purchase a lot of expensive equipment.

The trick is in finding the right combination in a video recording app and a video editor that will take your videos to the next level. Most of the tools we have looked at above have both and once you learn how to use them, you can turn your iPhone into one of the best video recording tools you could ever need.

Select a screen recording app that suits your needs depending on the kind of videos you want to record and take a moment to go through the app's features to figure out how it works. With the right tool and the correct implementation, your videos will very easily be the envy of the industry.