Live streaming encompasses a wide variety of topics, from social media to video games. When it comes to finding the best live streaming platform there is a lot of competition around. Today we will go through each of the most popular platforms to help you find the right one for you to stream your gameplay.

This article will talk about a list of the most popular live-streaming platforms. If you are looking for the best gamer recorder to record your gameplays without dropping frames or record the online seminars or demonstration, we'd highly recommend you try a free version of DemoCreator to record the Livestream below:

Netflix is best known for allowing people to watch series and films from numerous devices. Users can open an account and add different user profiles which is great for people that want to have separate accounts for their whole household without opening numerous accounts and paying separately. It has now added a live streaming service allowing viewers to partake in live exercise classes and watch sports as they happen. 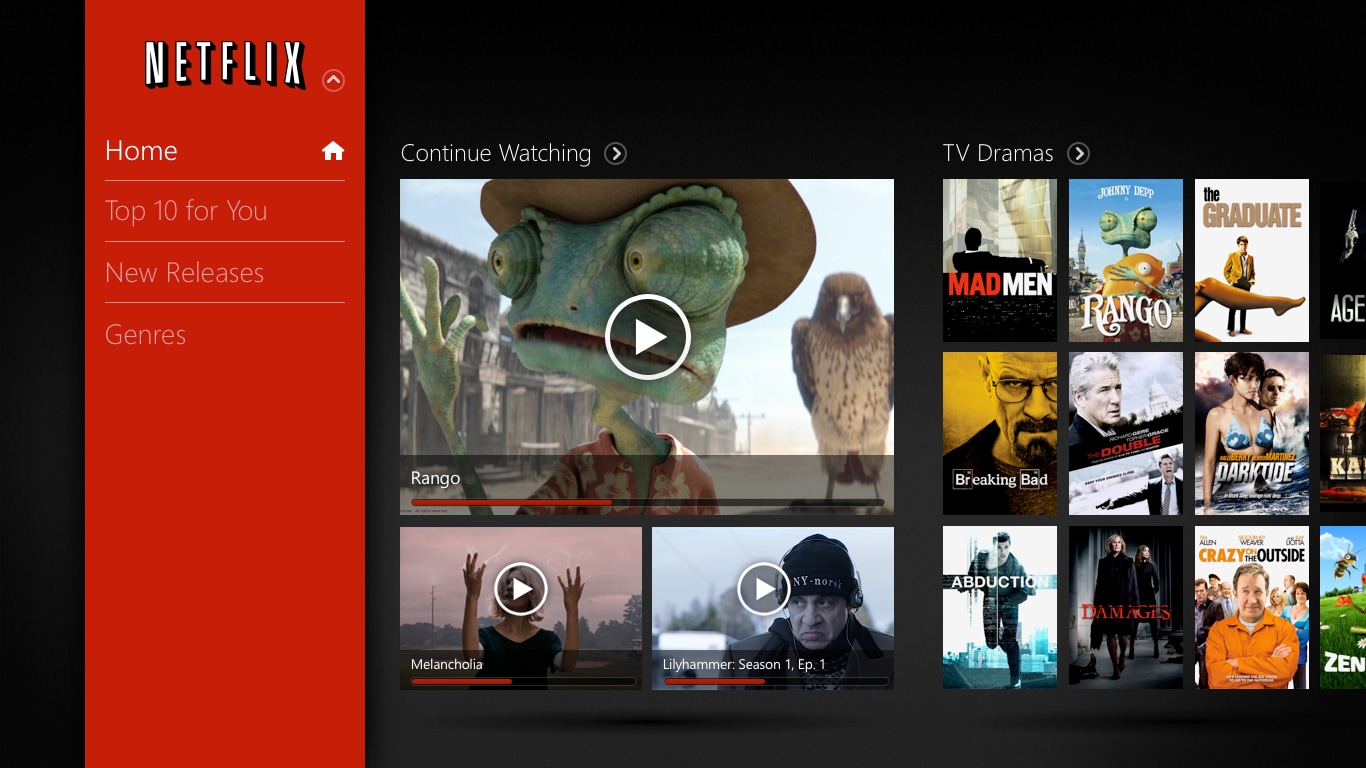 Uscreen is the leading turn-key video monetization platform that empowers more than 5,000 video entrepreneurs and creators to monetize their content and build thriving communities and businesses around their videos. Creators with large or small followings across all niches can sell their videos online using their unique pricing model on fully customizable video streaming websites and native apps for mobile and TV.

However, no video monetization platform is complete without live streaming. Uscreen allows you to also generate revenue from your live streaming sessions. You can choose to include your live broadcasts in your subscription packages, offer them for free, or pay-per-view.

Uscreen’s live streaming platform, powered by a robust global CDN, enables seamless streaming to any country. Uscreen’s multi-bitrate adaptive streaming ensures the best experience and consistent quality, regardless of the bandwidth or location. More than that, they make sure you reach your audience wherever they are. You can broadcast your live streams to any device, including your own native mobile iOS and Android devices, as well as TV devices.

LiveStream is a paid live streaming platform that lets customers upload live video’s from their mobile devices and computer cameras via the internet. It did previously offer a free service with ads covering the cost, but this has now been abolished. With more than 200 TV affiliates and the fact, it can be used with Spotify, World Economic Forum, and many more it could be the best live streaming platform for you to use.

With more than 80 million viewers each and every month the UStream app is among the best live streaming platform. It has been used to help soldiers communicate and let their families know in real-time what they are up to rather than them waiting for a call or letter to update them. You can chat using the messaging service and even use it with Twitter giving you the chance to connect with a lot more viewers. What you see is most definitely what you get as you are unable to edit while broadcasting live, however, this is the big appeal for most. 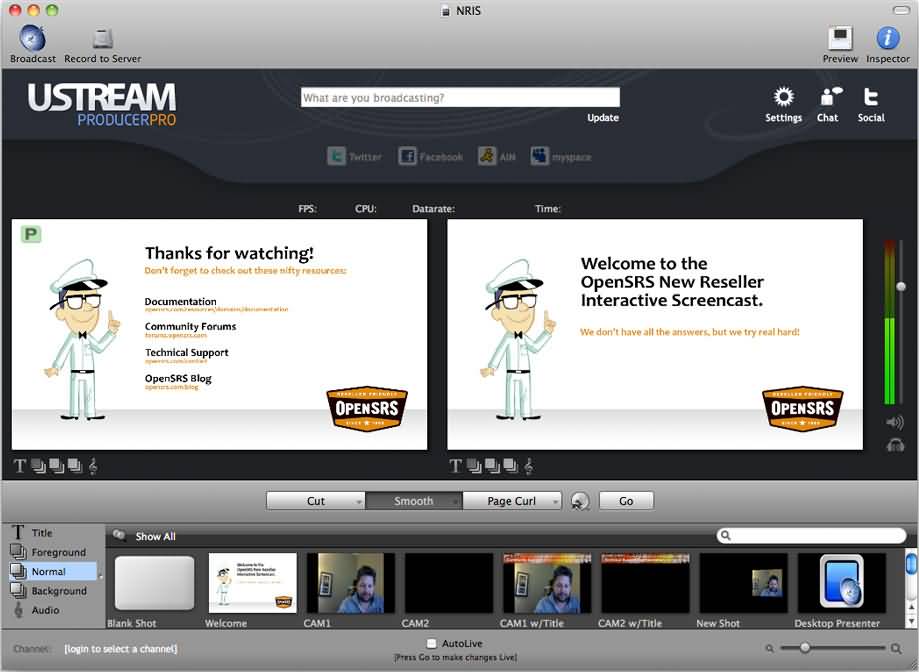 DaCast is considered to be the best live streaming platform for many viewers. What makes this stand out is the fact that you stream to the cloud which reduces the pressure on your device space. It’s simple to use and you can monetize it. Being customizable it appeals to many businesses and individuals. Being simple to use makes it a great streaming service for beginners who want to give live streaming a go but are not as tech-savvy as some. There is also support around the clock should you need it. 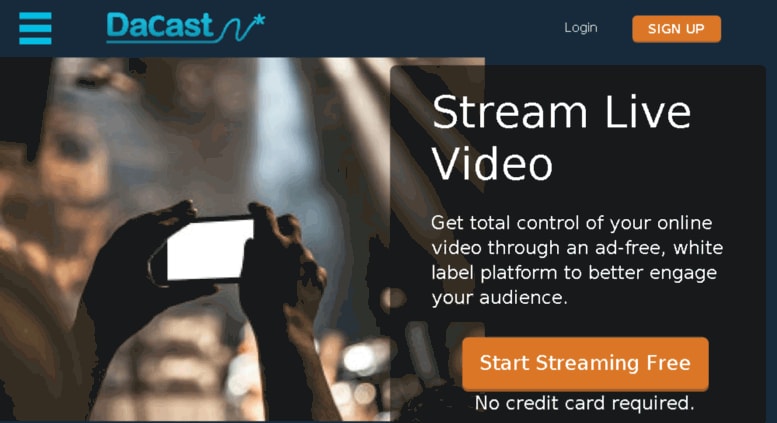 If you want the best live streaming platform that has already been used to record and stream high-profile events worldwide then StreamShark is the one for you. Users are able to reliably manage different parts of events streaming and reach out worldwide giving you the opportunity to grow your followers pretty fast. It supports 360-degree videos which is a must for many in this day and age and can be used on numerous devices making it easier to reach the masses.

The first of the top live streaming platforms is YouTube. Anyone that has not heard of it must have been living under a rock for the past decade. Whether music, tutorials, or just for the humor of the videos the majority of people will have visited YouTube for one reason or another. When it comes to watching gaming video’s it still reigns superior.

Before starting out with live streaming with YouTube you have to first ensure you are not subject to any restrictions on your account within the past 90 days. You have to enable the live streaming by going through the creator studio tools and then selecting live streaming. You can also stream from your mobile device, however, this is only available to users who have 10,000 subscribers plus. You can start and stop the right stream when you wish and you are in control. You can even preview it before you choose to go live which allows you to see what the viewers will. You also have the option to edit your privacy of live streams allowing you to stream to all, some, or just one of your viewers.

Social networking is a great way to get your live streams seen. It has been shown that one in five of all viewers regularly watches live broadcasts. Being the biggest social networking platform, Facebook live streaming has a lot of benefits and could actually be the best live streaming platform for many. As you have control over who sees your videos you can target the gamers in your friend's list without blocking the feed of others who will be less than interested. You can even target geographically which is great for those people who use the service to reach out for business purposes. All pages and profiles are able to use the facility as well as add to groups and events allowing you to reach out to people beyond your own friend's list. 100 million hours of videos posted on Facebook are watched each and every day; yours could be one of the many. Live videos have been shown to be watched over three times the amount of time as a non-live video so it’s definitely the way to go. 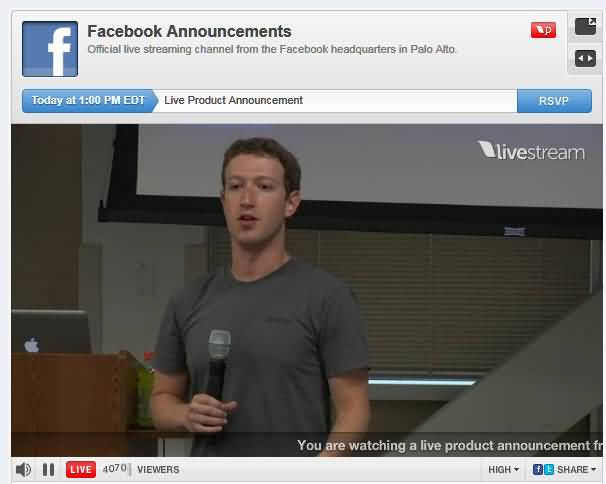 Periscope is a live streaming video platform that allows users to shoot videos using their smartphones. The app has been optimized to be used with the iPhone, however, it can be used on other devices. Live streaming events are a great way to gain attention for your brand or channel and Periscope having now been taken over by Twitter gives users a great way to intertwine live streams with monetization. Nothing is faster to reach the masses than live streaming and viewers know that they are seeing the raw video’s no edits. Via Twitter, you are able to notify the people that follow you that you are broadcasting so they can jump online and watch your latest video. Although a standalone app, you can use it with Twitter by signing in with your details. The videos even after live streaming are still available to be watched for 24 hours allowing those who missed out on the live shoot to catch up later.

Everyone likes a good laugh when they watch videos online, but what could be better than seeing funny things as and when they occur? Funny or Die allows users to capture funny, stupid, and downright dangerous videos all for the entertainment of the viewers. Viewers can follow your videos or find you through the search facility. If you like to make humorous videos then Funny or Die could very well be the best live streaming platform for you. 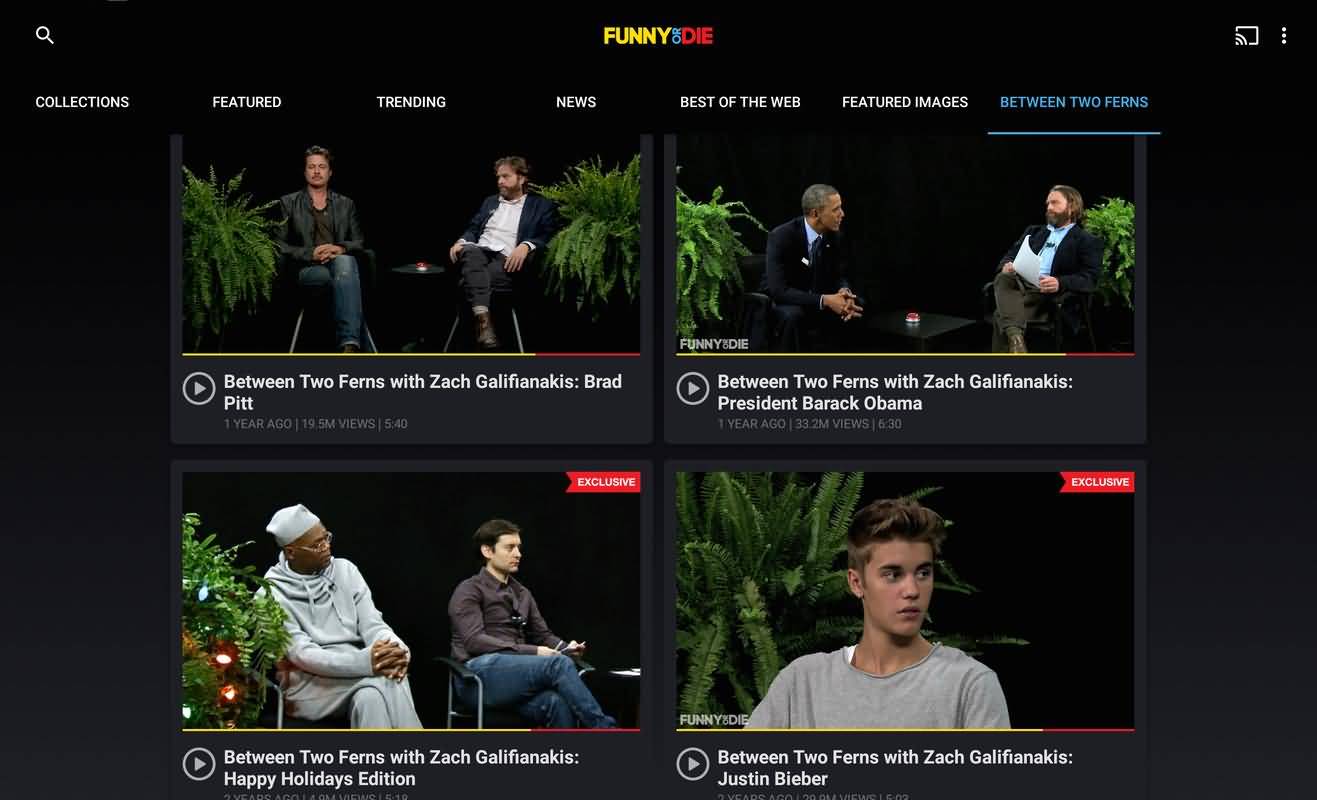 Crackle is another free platform for live streaming and allows users to stream full movies or smaller videos to entertain their viewers. It doesn’t have the great quality of some of the other live streaming platforms and has a lot of advertisements that are monetized to pay for the free service they provide. There’s a great movie selection from old to new which is why many people use it. The videos are only kept on for a short amount of time so it’s not always great for people that want to watch a film partway through and watch the rest another day as it could have gone by the time they return. It’s easy to use which makes it a great site for beginners and you have the option to share the videos via SMS, social networks, and even emails.

If you are looking for the best live streaming platform to showcase your gameplay then you will have come across Twitch at some point. Twitch TV is used by around 10 million gamers each and every day to stream, watch and chat about gaming all day long if they wish. It’s a fun new social network especially for gamers meaning that you are only broadcasting to people that are there for the same reason as you. With each person watching videos spending a good hour and a half each day looking at gaming videos, you can’t go wrong. With live streaming, you can interact in real-time with others that share your passion. 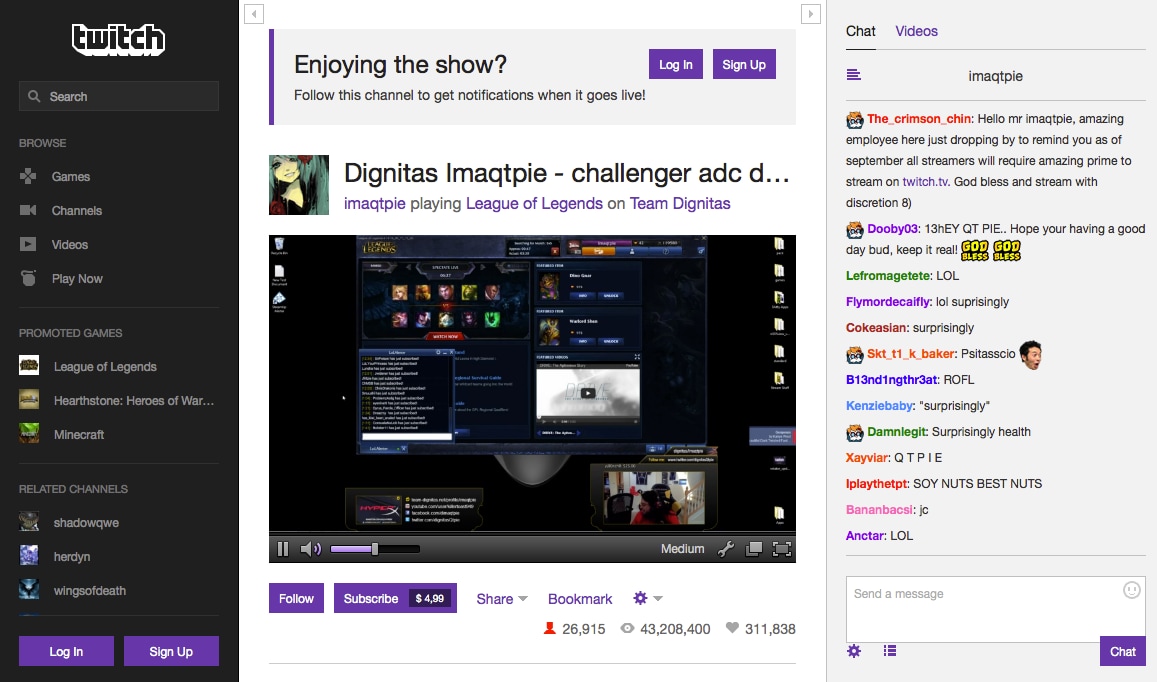 Dailymotion Games is another video platform that allows gamers to watch and create videos in two ways, Live and pre-recorded. They are able to capture and find game content from all around the world and share their favorites with others via social networking. This is great news for gamers that want to get their video’s seen by as many people as possible. With over 3 million users every month it’s easy to get a following fast and get hints and tips from other players. 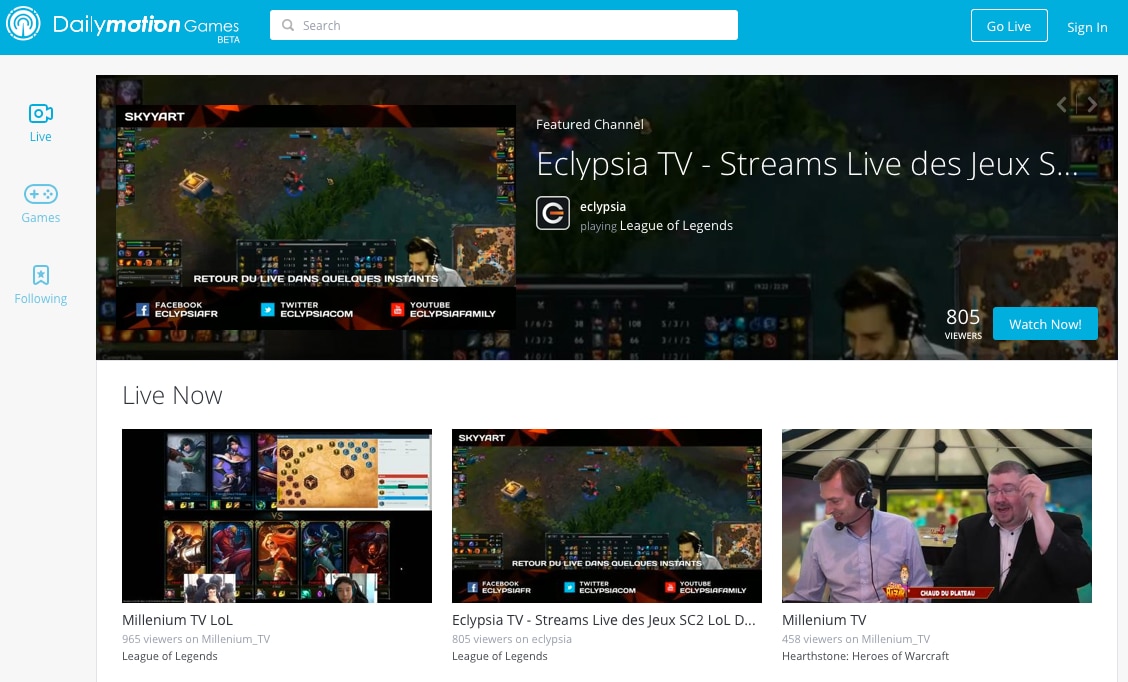 With 6 million active users each and every month Hitbox is a big competitor with Twitch. They now use the HTML5 video player over flash offering viewers and streamers higher quality videos. 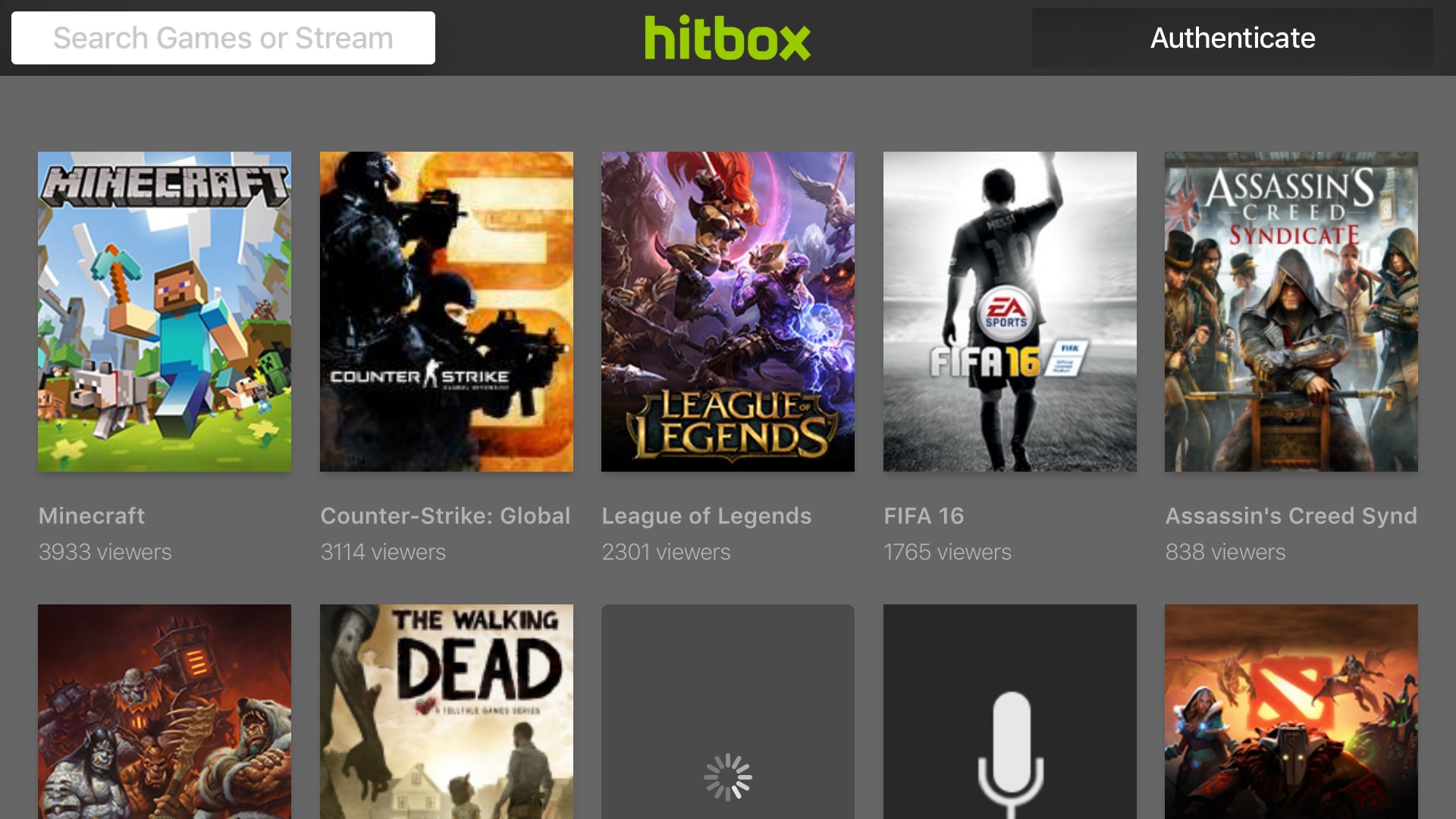 Instagib is a free live streaming service that uses advertisements to keep the service free. There is also the option to sign up as a paid user which will allow you to stand out more in chat and take away the ads. You will get priority viewing when you sign up so no more ‘ video servers at capacity’ warnings and they will be adding streaming services that will remain on the site for 72 hours over 24 hours which is currently the default very soon.

Azubu has been fighting to become the biggest and best live streaming platform and offers many streaming options including live. You can rewind, fast forward, and enjoy flawless streaming and the fan base is always growing. 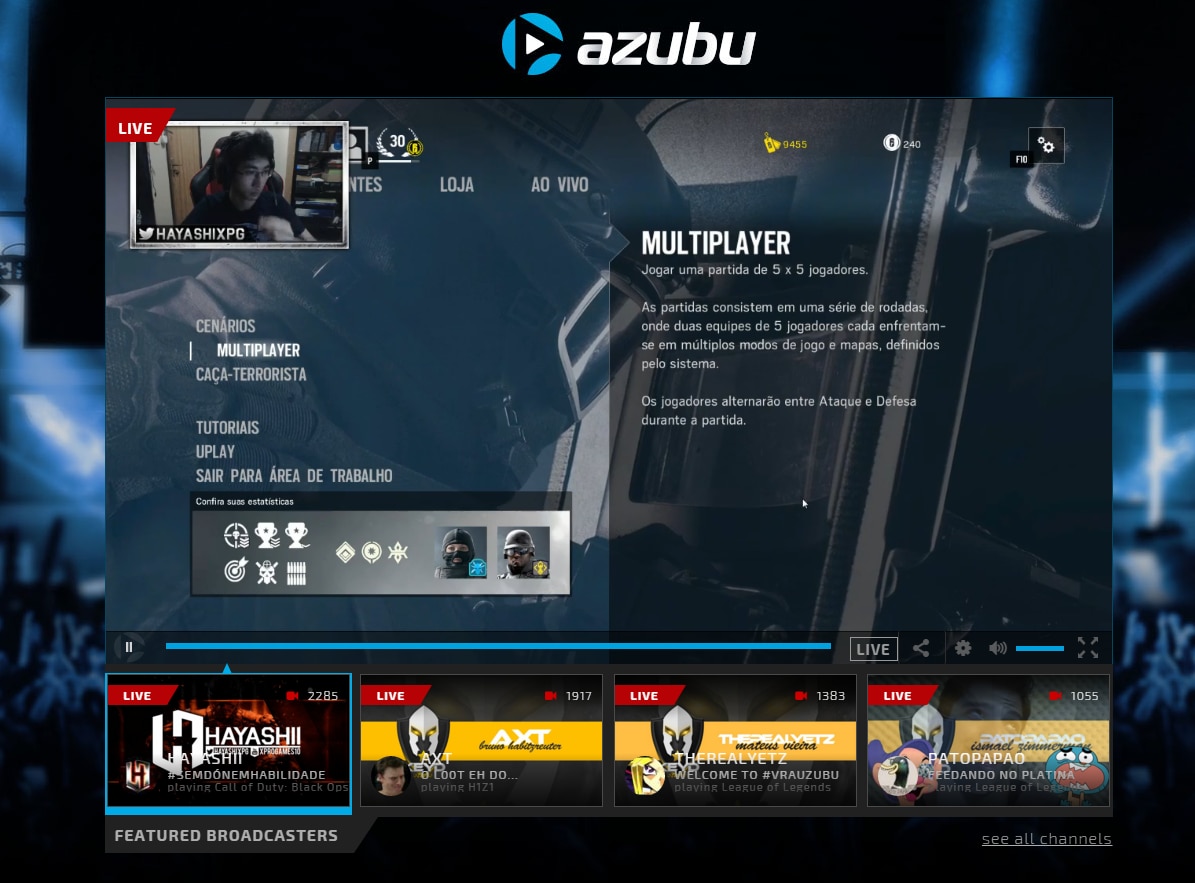 Besides live streaming, you can also record played game videos first and then edit them with some professional video editing software to share on YouTube or Facebook. For those who want to edit videos in a quicker way with some cool presets and video effects, we recommend you to download Wondershare DemoCreator below and have a try now.

How to Stream Gameplay on Twitch