How to Record Screen on Mac with Audio

Capturing onscreen activities on your MacBook or iMac is like a daily routine especially when you conduct a remote meeting or take an online class. Thus, you always need to screen record Mac with audio. Here we will give you several easy game plans. MacBook's clients frequently face this trouble, the same number of the clients don't have the foggiest idea how to record video and audio on Mac. With our suggested application apparatus, you can manage with no issue. 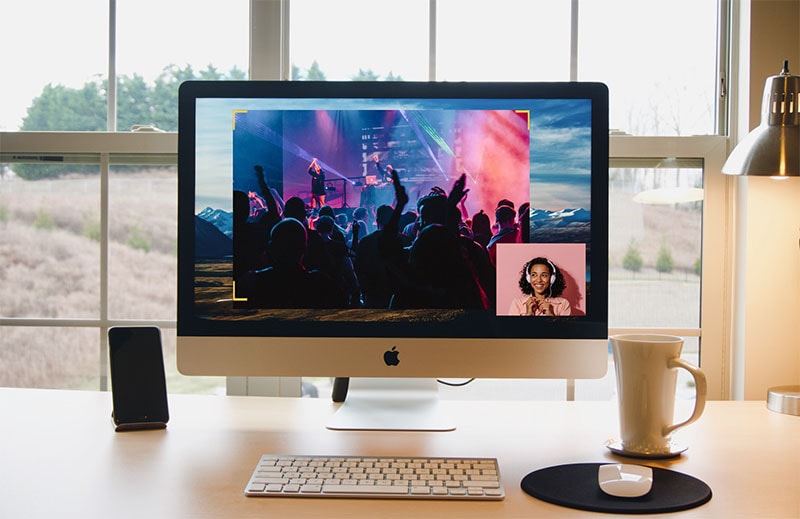 This Mac screen recorder empowers you to record everything occurring on your screen with extraordinary quality. You are permitted to make demo recordings for preparing or showing purposes, and make video instructional exercises for exhibiting your video ongoing interaction accomplishments and even item shows. At the point when you record your screen, you can incorporate composing the location into your program and show all your mouse developments and snaps to allow individuals to see precisely where to go and how to arrive.

Usually, you can incorporate video and sound when you record your screen as well. Use mouthpiece sound to portray your video from your PC's underlying amplifier or an outer mic. Discover in impending areas. Regardless of whether a screencast, video instructional exercise, or an online class, you can undoubtedly record the screen on your Mac. As of macOS Mojave, dispatched in September 2019, there's an incorporated choice that allows you to catch a video of your Mac screen. On account of the all-encompassing screen capture image toolbar in macOS Mojave, recording the screen on your MacBook or another Mac gadget can be actuated in only a couple of steps. Also, how to record internal audio on Mac is because Apple has expanded its Mac screen capture instrument with a screen recording highlight. Learn more with the upcoming steps: Step 2: Select Record Option
In the next step, the toolbar will eventually display the various buttons with the specified actions for each button. From the leftmost button, you can record your entire screen with the following button:
If you want to record a portion of your Mac screen, then you need to hit this button:

Step 3: Customize your Recording
After the appropriate button pressing, now you can customize your screen recording, especially if you've selected a specific area to record on your MacBook. 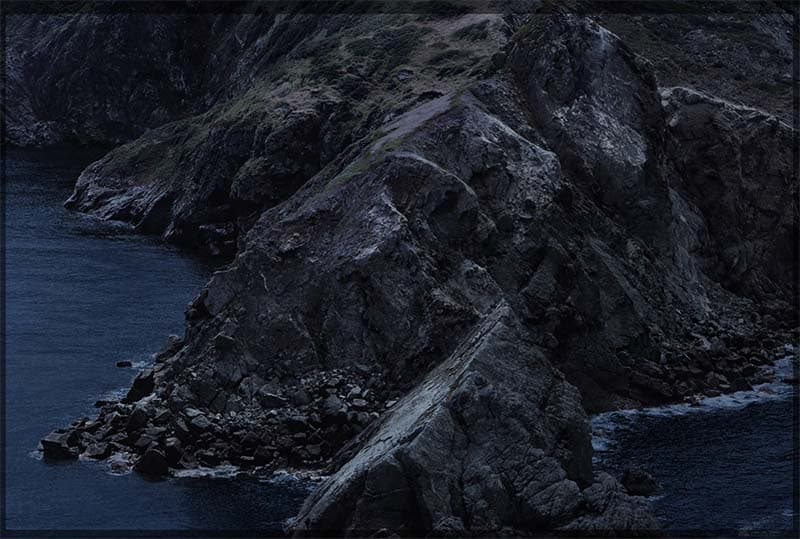 Step 4: Start/Stop Recording
In the next step, as soon as you’ve customized the recording area of your MacBook, now is the time to hit the Record button and for the stopping of the recording, hit the Stop

In this way, you can accomplish the screen recording on your MacBook using the Screenshot tool of macOS.

Part 2: Record Screen and Audio on Mac with QuickTime

If you own a high-level Mac, there is a free Mac screen recorder worked in the QuickTime Player application. QuickTime can record whatever you have appeared on the screen, including video playing on locales. You have confined options on what you can use as a sound source. On a PC, you're looking at the decisions of "Worked in Microphone" and "None."

Right when a condition arises where you need to record the sound close by your screen recording on your Mac, you could offer to raise the volume a chance your speakers and assumption that a fundamental beneficiary gets that sound, anyway that is far from flawless. QuickTime can record sound from your PC mic. This will get the including sound, similarly as the PC sound, yet at impressively less quality and with a little deferral. However, for a quick video, this can work uncommon. Follow the steps below to record:

Step 1: Launch QuickTime Player
To start with the screen recording with the help of Apple’s built-in application, go to the utilities and find the QuickTime Player icon and launch it from there.

Step 2: Open Screen Recorder
In the next step, meanwhile within the QuickTime Player, you need to open the recorder window. For that, go to the File of the player and select the New Screen Recording option to open a screen recorder. 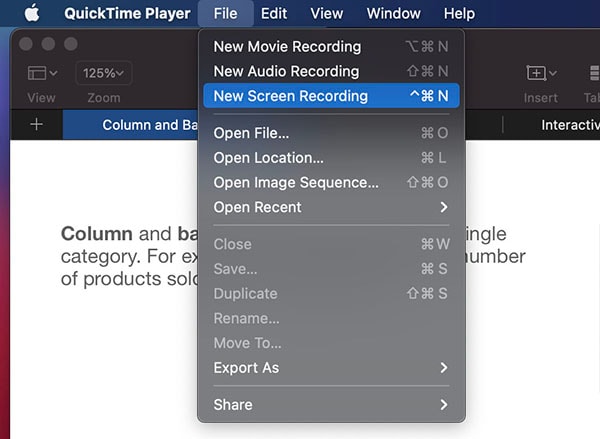 Step 3: Enable the Audio Recording
Now, within the QuickTime Player recorder, go to the drop-down button and select the audio recording option from the following. 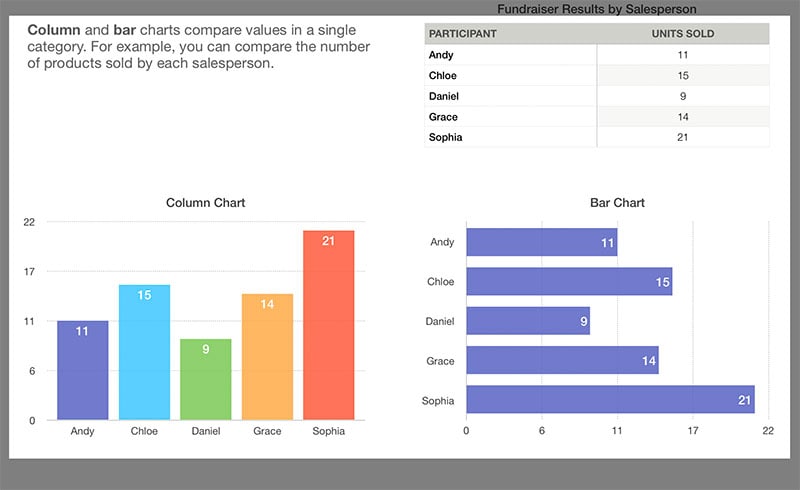 Note: If you’ve newer versions of your macOS, then this option won't appear for you.

Step 4: Start Recording
In the final step, after enabling the audio recorder, you need to start the recording by hitting the Red Circled button situated within the screen recorder window. 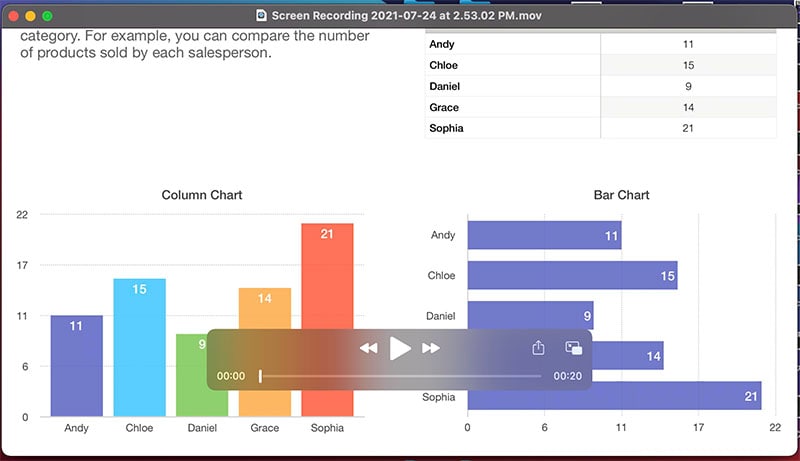 In this way, you can perform the screen recording with audio with the help of QuickTime player, which is a built-in application of MacBook.

Although, you can record your MacBook screen with audio with built-in tools and applications like QuickTime player, it doesn't give you a professional look if you're a pro-level videographer or if you want to do some editing on your screen recordings. Besides, you can have a problem with the audio recording as the newer versions of macOS have skipped the audio recording option inside the QuickTime player, so you need to get help from a third-party application. In compliance with this need of the hour, Wondershare DemoCreator is here to assist you in this regard as with this toolkit, Mac records screen, and audio without any flap.

Wondershare DemoCreator is a perfect solution if you want to learn how to record a screen on Mac with audio and facing trouble doing it. This application on macOS can perform this task with the various other customizations and the altering options afterward. You can also draw on your screen meanwhile recording it at the same time with the perfect screen drawing tool inside the recorder. Moreover, if you just forget to add or edit something in your recording tutorial, then worry not! You can of course alter it with the powerful editing toolkit of this application. To learn how to record audio on MacBook Pro, follow the steps below:

Step 1: Launch DemoCreator
In the foremost step, you need to install this software on your MacBook if it isn't installed already. To assist you, here is the link where you can download it easily for your MacBook:
After the installation/Updating will be done, now launch the software from the Applications/Utilities of MacBook. Click "New Recording" option from the main interface.

Step 2: Setup Audio/Video Options
In the next step, you need to set up the audio and video settings from the recorder window. You can customize the screen which you want to include in your recording as well as the audio source, either you want to include the Microphone recording or the System sound recording from the straightforward buttons available to you in the recorder window as following:
After you’ve set up the screen and audio, now hit the record button, which will start recording.

Step 3. Start Recording
Now you can click on the red button to start recording screen and audio. Use the screen drawing tools to express your ideas better. Step 4: Export/Share your Recording
Press Shift+Cmd+2 to end the recording, and then the clip will be opened in the editor. You can make editing and export the video locally or share it with YouTube.

Apple demands that iOS and macOS won't ever transform into a similar advanced monster, however at any rate it's inexorably ready to divide the most helpful highlights among every stage. With macOS Mojave, that equivalent extraordinary element goes to Apple's work area framework, alongside a heap of Mac-proper improvements. But what’s worrisome when you have got a complete package available to you that will solve all your troubles, just download the best Mac screen recorder Wondershare DemoCreator and follow the above-mentioned steps which will perform the audio as well as video recording without any trouble.