There is a spike in the demand for a few software applications after the pandemic and it’s a result of the shift that we have seen in terms of workflow. A major section of the companies has opted for work from home setup and for it to smoothly run, the users will need to have a set of tools and among them, and the one that we can’t miss is a recording application. If you are using an AMD chipset, the tool that we are going to recommend is AMD recording software, it’s a feature-rich tool that will help you in easily capturing the desktop.

Almost all the operating systems come with an in-build recording tool and it carries the most basic set of features that one will need to have in the recording. These recording tools will need to be paired with a better graphics card so that it can capture the screen in the best resolution.

Part 1 How to Record Games with AMD?

We can understand the dilemma that you might be in after getting the operating system installed in terms of using the recording software. In this section, we are going to discuss the steps that you will need to follow to efficiently use the recorder. We will also include the screen grabs of the AMD Radeon’s functionality for better working and functionality.

1. On all the AMD-powered systems, you will need to right-click on the desktop. Here, you will get the AMD Radeon Software option. 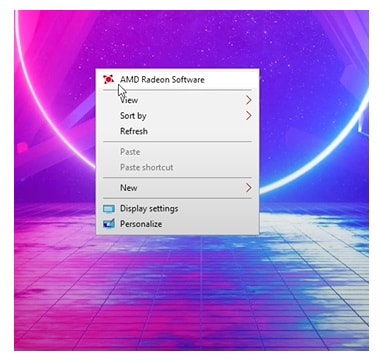 2. It will greet you with a feature-rich dashboard where you will get a plethora of tools. On the top, there will be four tabs; Home, Gaming, Streaming, and Performance. You can also reach the tool by a simple AMD Radeon search. 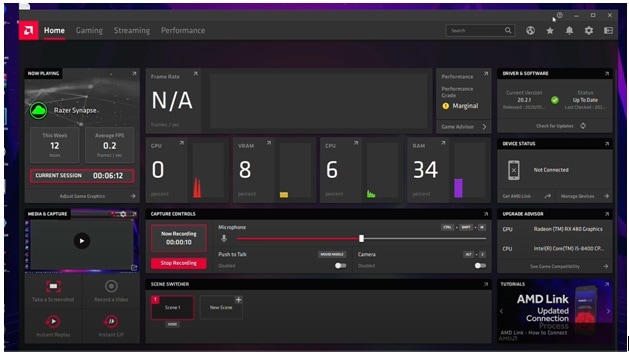 3. To set up the recording, you will need to go to the Streaming tab. Here, on the top-right, you will get a menu option in a vertical three-dot icon. Click on it and you will get the Live Streaming Settings.

4. Under the General tab, you will have to scroll down and get to the Recording section. Here, you will get the Record Desktop toggle to turn on. Also, make sure that the Borderless Region Capture is also enabled.

5. Below this tab, you will need to select the Recording Profile from the drop-down menu, select High. You will also get the option to configure the Recording Resolution. We would recommend selecting In-game so that it sets it according to the resolution of the game or the screen. Along with it, select the FPS you want to record the desktop in.

6. Under this section, you will get to configure the settings related to the microphone. The Record Microphone toggle should be enabled if you want to include your commentary or voice-over in the video.

7. There will also be an option to set up the mic level and you will also get a toggle to enable the PTT feature. It will not continuously record the mic but you can use the push to talk feature to speak when you need to.

8. Scroll back to the top and you will find the Media section. Here, on the top, you will get the option to select the destination folder where you want to save the recording.

9. Once all the tweaks are done, you can get back to Home and tap on the Record a Video button to start recording. You will get all the controls on the homepage of the AMD Radeon tool.

Let's go through the list so that you are able to understand the application in a better way:

No doubt the AMD Radeon recorder is one of the best recording software for AMD, you will find it quite limited in terms of features and settings. No matter whether you are an AMD or a Windows user, you will need to have a tool that offers a wide range of features.

If you are unable to settle on one, we have the best recommendation for you. The app that we are going to recommend is Wondershare DemoCreator. The app offers a very intuitive dashboard that will provide all the features through a layout that is easy to navigate around.

The biggest advantage you must be getting by using this tool is that it will come with an in-built video editor. It will allow you to tweak the recorded session without any hassle. The tools that you will get here are used to trim, add the picture/video externally, adding a voice-over to the video along with a wide range of annotation tools and templates.

How to record the screen using Wondershare DemoCreator?

At this point, here, we will get to jot down multiple steps you require to start recording the desktop without any sort of hassle.

1. On downloading the given app from the official source, you will need to launch the setup file. You will get greeted with a compact dashboard.

2. There will be two options; Capture and Video Editor. To get started with a new recording, you will need to click on the Capture button.

3. A new dialog box will appear and it will contain a wide range of options. It will let you configure the recording area based on the custom resolution or by particularly selecting a folder.

4. Right there, you have to opt for configuring the recording devices. Tap on the mic icon and you will get the option to select the preferred mic. You will also get to enable the webcam so that you are able to add a facecam throughout the recording.

5. The application will also let you select the recording area by dragging and dropping the corners to select the area. At the bottom of this section, you will get the option of enabling the system sound recording.

7. When you are done, stop the recording. It will automatically take you to the editor. The interface that you will get here is highly intuitive and all the features will be laid out through easy navigation.

8. The editor will let you tweak the recorded footage in terms of trimming, cropping, and much more. The annotation tools will let you explain in a much better way and the audience will get to establish a better connection.

9. Users will also get to add a voice-over on the video.

10. Once done, you will get to export the final file in a number of formats.

If you are worried about the Radeon default recording setup, the AMD recording software download will not need to be done. It will come preinstalled with the operating system and all you will have to do is launch the file and start using the app. The best alternative application that you can go for is Wondershare DemoCreator. It will come loaded with a wide range of features that will help you produce the best quality screen recording.