How to Record Screen iPhone 12

Screen recording is among the fundamental inherent highlights of present-day cell phones. Fundamental as in you can just hit a symbol to record your screen, should you struggle to explain certain activities or techniques utilizing your cell phone. Apple has made the screen record iPhone 12 simpler than at any other time over the most recent couple of years. Discovering the controls can be somewhat troublesome from the start, however. Fortunately, a couple of basic advances can prepare anybody to record video of all that occurs on the screen alongside a sound that is playing on the iPhone 12. An alternate route symbol for the screen recording highlight is ordinarily present in the Control Center on an iOS gadget except if it's crippled in settings.

In iOS gadgets, especially to record video on iPhone 12, is likewise among the coordinated highlights that permit you to straightforwardly record the screen of your iPhone or iPad. Apple officially launched the iOS 14 in September of 2020, bringing a few new highlights, including Home Screen Widgets, the App Library, and smaller Siri cooperation and calls, alongside enormous enhancements to Apple Maps and Messages. Screen recording, notwithstanding, has worked along these lines on iPhone models since iOS 11. Before this, recording the screen required jailbreaking the iPhone or associating with a PC and utilizing outsider applications. So, it was very unwieldy. On the off chance that you're thinking about how to record your screen iPhone 12 pro max, we've also compiled and spread out a fast demo for your reference. Here's all you need by which to record your screen iPhone 12. Read on to find out utterly.

How to Add Screen Record to Your iPhone 12

Before starting to record the screen on an iPhone 12, setting up the iPhone Control Center is important. A while later, getting to this component is only a swipe and a touch away. To empower this choice, clients need to open the Settings application, discover 'Control Center' on the left and tap 'More Controls' to see the entirety of the accessible choices that can be added. 'Screen Recording' is the one to add to empower this component. The choice to catch a video will be added right away. Swiping down from the top edge of the iPhone on the correct portion of the screen will uncover the Control Center and the screen recording symbol appears as though a strong circle encompassed by the layout of a circle. It's somewhat similar to the screen button on the iPhone camera, yet more modest. There are a few alternatives accessible when recording the screen available with a long press.

Easy Steps to Screen Record on your iPhone 12

The following steps will instigate the screen recording on the iPhone 12 and different iOS gadgets that have similar iOS rendition. Real screens and menu things anyway could fluctuate between gadget models.

Step 1. To get started, check your iPhone settings and ensure that screen recording is added among other shortcut icons in the Control Center. To do this, tap the Settings icon from the Home screen.

Step 3. To enable screen recording, Tap the plus icon (+) next to Screen Recording. A Screen Record icon should now be available in the Control Center, and you can find it by swiping down from the top-right edge of your iPhone screen.

To proceed with this here is how to record screen on iPhone 12 with live steps: 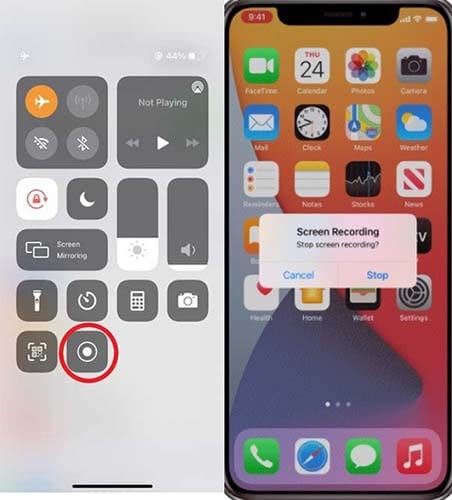 Navigate to the screen where you want to start recording and swipe down from the upper right corner of the screen to find the recording icon.

Now, tap on the Record icon. After a three-second countdown, the Record icon will change to red and it will start recording your iPhones screen, even if you navigate away from the Control Center. You'll know Recording is still in progress because the icon, displayed in the upper left-hand corner, will be red.

When you are finished recording, tap the red icon at the top left of the screen and then tap “Stop.” to stop recording. The recording will be saved in the Photos app.

Once you are through with recording, you may want to edit the captured video. Apple's Photos app makes it pretty simple to edit video. Your new recording will be saved in the Camera App on your iPhone. To view it, launch the Photos app and the recorded video will be the most recent item.

How to Edit Screen Recording on iPhone 12

Altering a screen recording is equivalent to altering some other video in the Photos application. You can alter the start or end part of your account. You can manage the video and save it as an alternate clasp. It will not have any impact on the first video; nonetheless, you will get an adjusted rendition that you can send anyplace you need. To edit a screen recording, do the following: 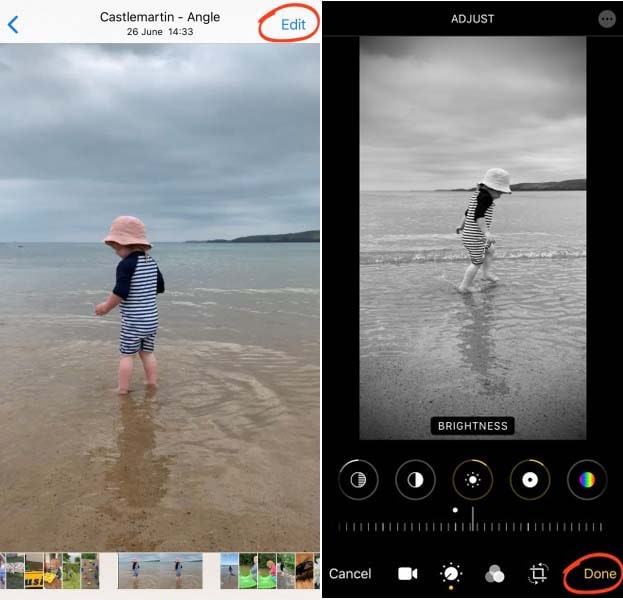 Locate the video in the camera roll of your iPhone and tap on it.
Tap “Edit.” And then Tap and drag the arrow at the beginning of the video to the right. It will turn into a yellow frame. Size the frame to trim the video down to just the section you want to retain. You can hit play at any given point to make sure you are satisfied with the output.

Lastly, Hit the “Done” and then tap “Save as New Clip.”

How to Screen Record with Sound on iPhone 12

On the off chance that you need to record your screen, you needn't bother with a unique screen recorder application or sound chronicle programming. Mac offers a free apparatus for iOS and iPad that you can add to your iPad or iPhone's Control Center to screen record with sound. An iPhone screen recording will record the interior sound of course (if your iPhone's ringer is on). You can likewise record your voice during the screen recording. How about we begin with how to screen record with sound or without sound, including framework sounds and outside sounds. Here are altogether the appropriate responses you've been searching for to the queries.

If you want to record your voice while screen recording on your iPhone, you want the Microphone turned on.

If you only want to record the sounds of an app, you want the Microphone turned off, but your iPhone's ringer turned on.

If you turn the Microphone off and have your ringer off, the screen recording will be silent.

Recording Screen with Audio on iPhone 12 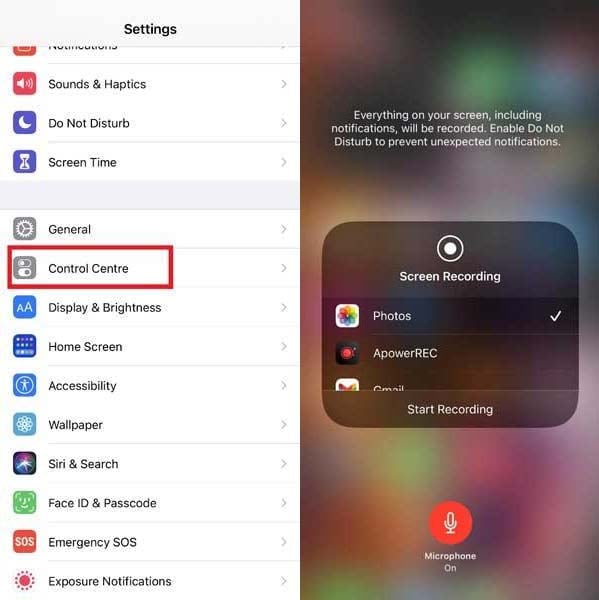 On the iPhone 12 or an iPad with iOS 12 or later, or iPad, swipe down from the upper-right corner of your screen. On earlier iPhone versions, swipe up from the bottom of the display. 3D Touch or long-press the Screen Record icon.

Tap the app where you want your screen recording saved and then tap on the Start Recording. Your iPhone will record the screen, your voice, and any other ambient audio. You'll have to close the Control Center to reveal the app that's being recorded, or the only recording you'll get will be of the screen recording controls.

The clock in your app will have a red background, indicating sound is being recorded, and you'll see an orange dot in the upper-right corner, indicating the app is using the microphone. When ready to stop recording, tap the clock at the upper left of the screen. Tap Stop to end the screen recording; the recording will be saved to the location you selected earlier.

What Limitations Are There for Recording Your Screen

Significantly, Screen Recording will not work all over. Typically, this happens when certain applications force impediments on usefulness when playing duplicate secured content. If so, Screen Recording may neglect to begin, the application that you are endeavoring to record may delay or freeze, or halting the chronicle can bring about a mistake message. If Screen Recording was working without issues from the beginning and out of nowhere quit working, at that point, it very well may merit restarting your iPhone. That should almost certainly help settle any product glitches keeping Screen Recording from running appropriately.

Press and hold both the Power and either Volume button Until you see the force off slider. Presently, swipe the slider from left to option to control off your iPhone. In the wake of killing your iPhone, press and hold the Power button again to boot it back up. Assuming the explanation was a minor specialized glitch, Screen Recording should chip away at iPhone 12 without issues. For instance, you can't utilize Screen Recording while at the same time playing music or recordings in the Music application. Issues with Screen Recording segregated to a certain application doubtlessly imply that this is the explanation. Unfortunately, you can't do anything about it.

How Do You Adjust Screen Recording Settings

The default setting when recording the iPhone 12 is to incorporate any sound that is presently playing on the gadget. This is a pleasant touch and, indeed, the inherent receiver can likewise record live sound. A genuine illustration of mic utilization is to disclose how to utilize an application for a companion or partner. Any sound coming from the telephone is blended in also, so remarking on a video is another chance. The instruments here are really clear as crystal, yet here's a fast preliminary in case you're new: The top shows the fix and re-try catches, while the base offers different markup styles and apparatuses, just as a shading picker. If you tap the "+" symbol, you'll likewise see alternatives for adding text, a signature, a magnifier, haziness, and the sky is the limit from there.

On the off chance that you choose to alter or markup your screen capture, you'll be shown the underneath screens. From left to right: the screen you need to screen capture, the alter/markup show, and the choice to save or erase the screen captures. If the page you're screenshotting upholds it. You're likewise ready to flip among "Screen" and "Full Page". On account of Safari, this component permits you to rapidly save a screen capture of the whole Safari page, as though you looked over the right to the base and screenshotted it completely. This can be useful for configuration work or web advancement.

Screen Recording is fundamental usefulness with various use cases. In addition to the fact that it helps you catch astonishing minutes by video recording your iPhone 12, yet it allows you to record and share convoluted cycles, assists you with submitting input to application engineers, and that's just the beginning. Henceforth, guaranteeing that it's all set off immediately is vital. Ideally, the fixes above are aided, and you are ready to get it done. While recording a running tally of record time will be appeared at the upper left of the screen. Contacting that time check will quit the recording. The iPhone screen recording highlight that we've explained above is very easy to utilize whenever it is set up in the Control Center.