How to Screen Record on MacBook Air

Catching the screen of your MacBook Air or iMac can be valuable from various perspectives. Regardless of whether you're recording a show for school, telling a friend or family member the best way to set up an application, or reporting your quickest spat your number one Apple Arcade game, screen record on MacBook Air can help. Regardless of whether you need to save a video of what's playing on your screen, share what you're taking a gander at with companions, or film an instructional exercise, screen recording MacBook air can prove to be useful.

Screen catch applications record what's going on your screen, including the development of your cursor, so you can convey directions, depict issues, or offer information here you'll get everything to know how to screen record on a MacBook air. Working out depictions of such things takes essentially more than simply showing somebody your screen; however, you're normally not remaining close to the individual or individuals who need to see your screen. Video catch applications take care of that issue. Let's dive in.

Each Mac Air accompanies QuickTime Player preinstalled. It's the video player that opens up when you're watching a video you've downloaded or adjusted from your telephone to your Mac. That equivalent application additionally has each apparatus you'll have to record your screen. Luckily, you'll track down a phenomenal determination of screen recorders for macOS available to you. Regardless of whether you need something basic and free or the high-level highlights of a paid arrangement, we've gathered together the best screen recorders for Mac to help you choose.

Click on File in the top menu (or, if QuickTime is in your dock, right-click on the icon) and select "New Screen Recording". You'll get a pop-up window labeled "Screen Recording." Click the arrow next to the record button for recording options, like choosing to record audio from your computer's external mic or to show your mouse clicks. 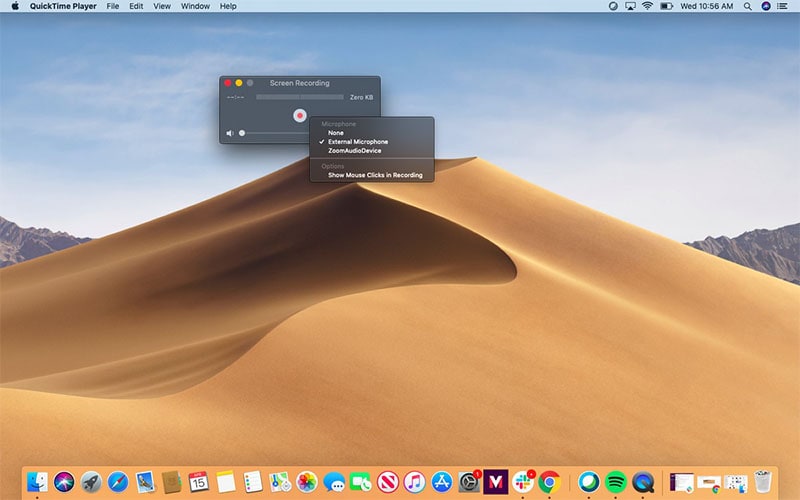 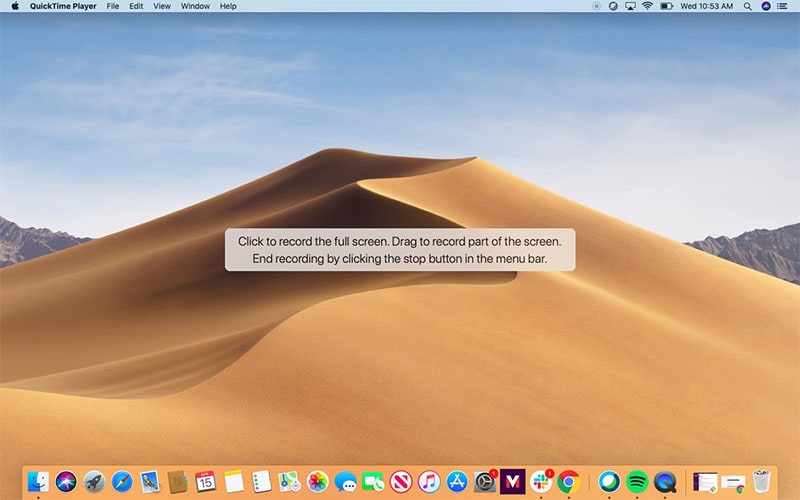 Click and drag the cursor to create a window you can resize or move if you wish and then click the "Start Recording" button in the middle of that window. 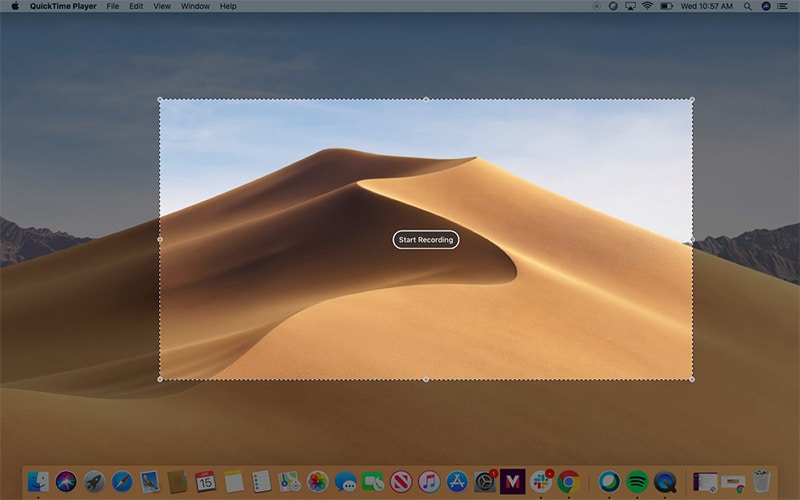 To stop recording, either click on the stop button in your top menu bar or press Command + Control + Esc. Either way, QuickTime will open the video for you to view and edit.

2. How to Screen Record on MacBook Air without QuickTime

Keen on making video instructional exercises to show others how to utilize some product? Or on the other hand, maybe you need to convey a MacBook Air issue you're encountering. screen record on mac air is perhaps the best method of introducing this data. With the Wondershare DemoCreator, you can easily make screencasts and record your MacBook air screen without any hassle. With DemoCreator, there's even the choice to plan a completion time for your account, to record your webcam video just, or to record just your framework sound or mic.

The DemoCreator video recorder interface is clear and straightforward. You pick your catch region, regardless of whether to incorporate webcam and amplifier sources of info and snap Record. In case you're attempting to show a specific application, the capacity to follow your console strokes and your mouse clicks come inconveniently as well. Snap and drag impacts and a fair determination of stock media are situated along the left-hand side of the application, with point-by-point properties and customizations showing up on the right-hand side at whatever point you select a component from the editor timeline.

Step 1. Download and install
In the foremost step, download this software from the official link we have shared below for your ease.
After you've downloaded it on your MacBook Air, install it by opening the downloaded file that will take only a few minutes to finish.

Step 3. Customize and Start Recording
In the main step, meanwhile within the screen recorder of this software, customize the software to its best extent where you can enable the microphone, system sound, webcam, screen cropping, fps management, and much more.
Just as you are done finishing the customization, hit the recording button which will start recording your desired screen without any hassle. 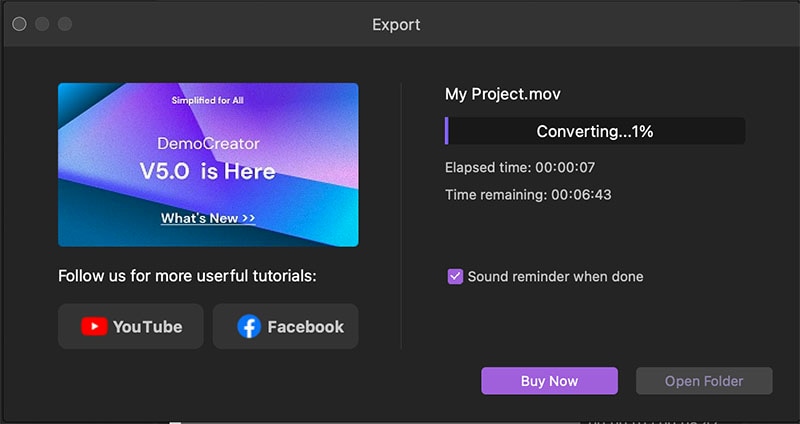 An incredible, yet simple to utilize screen recorder, Camtasia for Mac assists you with making proficient recordings without being a video expert. Effectively record your screen developments and activities, or import HD video from a camera or other source. Alter and alter the substance on both Mac and Windows stages, and offer your recordings with watchers on almost any gadget.

Load Camtasia Mac and you will get the setting window

Choose the preset region of your video recording and hit the red button on the right to view and preset the recording region.

After the recording is finished, Camtasia will lead you to a video editing window. You can then edit the video by adding some special effects, trimming, cutting, annotations, etc. to make it more vivid.

4. How to Screen Record on Mac With Camera

VLC is an extraordinary screen recorder that incorporates every one of the instruments that are expected to record the screens, alter screencast recordings, and make intelligent e-Learning courses for Mac. It is a free and open-source cross-stage intuitive media player and framework that plays the most sight and sound reports and even DVDs, Audio CDs, VCDs, and distinctive streaming conventions. The vast majority will in general disregard the capacity to record screen. 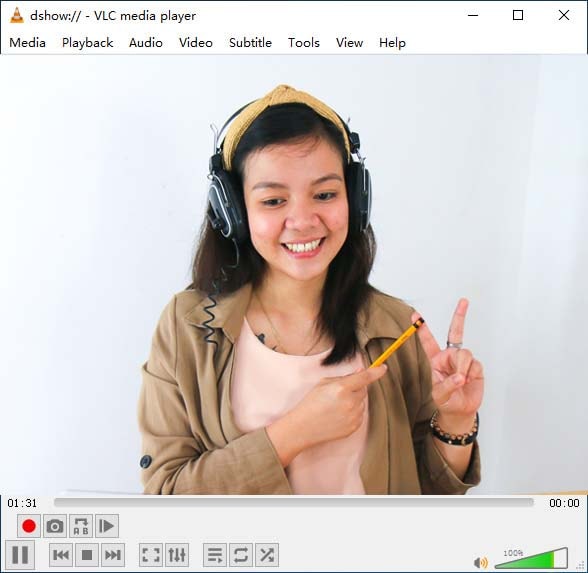 However, it's not the most remarkable account device, it's as yet a decision to utilize while considering the advantageous and progressed playing augmentations on Mac.

The MacBook air shortcut feature adds a wow factor to your screen accounts, yet it's anything but a more extreme expectation to learn and adapt than different choices on this rundown. Even though its manager looks moderate from the outset, there's a mind-boggling number of highlights to filter through. Other champion highlights incorporate the capacity to record your work area at High-Definition capacity (i.e., high goal) just as some noteworthy templating choices for eliminating creation time. This feature is feasible for that one quality specifically. 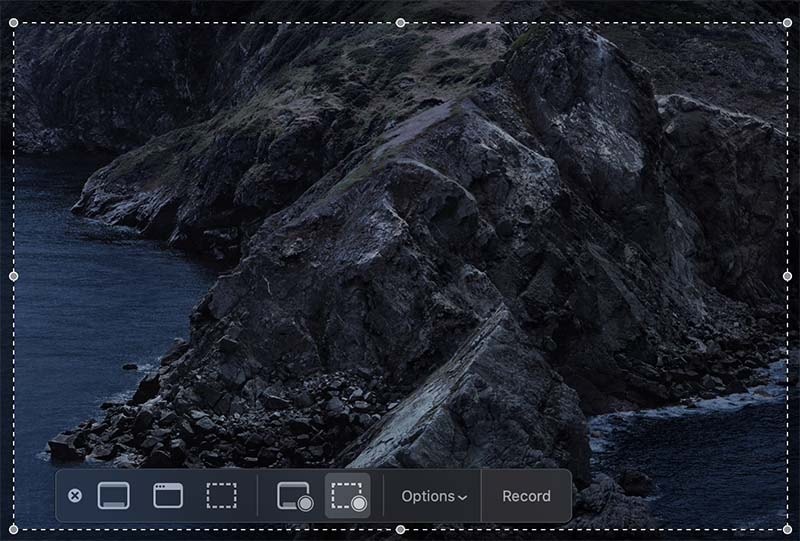 By a wide margin the most significant of this Shortcut is that in MacBook air, it has also its built-in editor with the stock media library, which incorporates more than numerous pictures, brief snippets, and recordings (some in 4k) to put an expert sheen on your screen recording. Open the in-application library from the Features sheet, search by watchword, then, at that point snap and drag the media to your course of events. You can use it without any additional installation as it has the functionality of built-in installation right when you open up the MacBook Air. You can also use this shortcut feature to screenshot as it's basically for the screenshotting purpose but due to the extensive approaches to screen recordings you can also utilize it for this one as well.

At the point when you go for Mac free screen recorder, if it's not too much trouble, remember, large numbers of them will accompany time-restricted account, or a few highlights will be absent. Be that as it may, the above methods will be a decent decision for the individuals who would prefer not to spend a lot of cash on the screen recorders. In the wake of assessing various screen recorders for Mac, we tracked down that somehow or another the over a variety of solutions to how to screen record on a MacBook air where some screen recorders like the DemoCreator are the best ones in the MacBook Air market at this point nevertheless.