How to Record Gameplay on Windows 10 PC

To say that Windows 10 is a significant improvement over other versions of Windows is a big understatement. Not only does it make this age-old operating system infinitely better in numerous ways, but now Windows 10 is quickly becoming an ideal playground for various PC games. So much so, that gamers have come to enjoy the numerous benefits that come from playing their favorite games on Windows 10.

With increased gaming comes the need to share in the gameplay and one way to do that is to record the gameplay on Windows 10. In the past, this process was complicated by the fact that you needed to have a number of external tools and software solutions to record a good quality gaming session. But Windows 10 is making eve gameplay recording easier. In this guide, we are going to be looking at how you can easily use the in-built features in Windows 10 to record gameplay and share with you another solution with additional features for those times when you just need more.

How to Record Windows 10 Games with Game Bar

The Xbox Game bar comes built into Windows 10 to make it easy to capture videos and screenshots while playing PC games. During gameplay, you can press the Windows Logo Key + G on your keyboard to access the Game Bar. If you are playing using an Xbox 360 or Xbox One controller plugged into your computer, press the Xbox button.

To take a screenshot of the gameplay, click on the "Camera icon" and Game Bar will generate an image of what is happening on the screen. 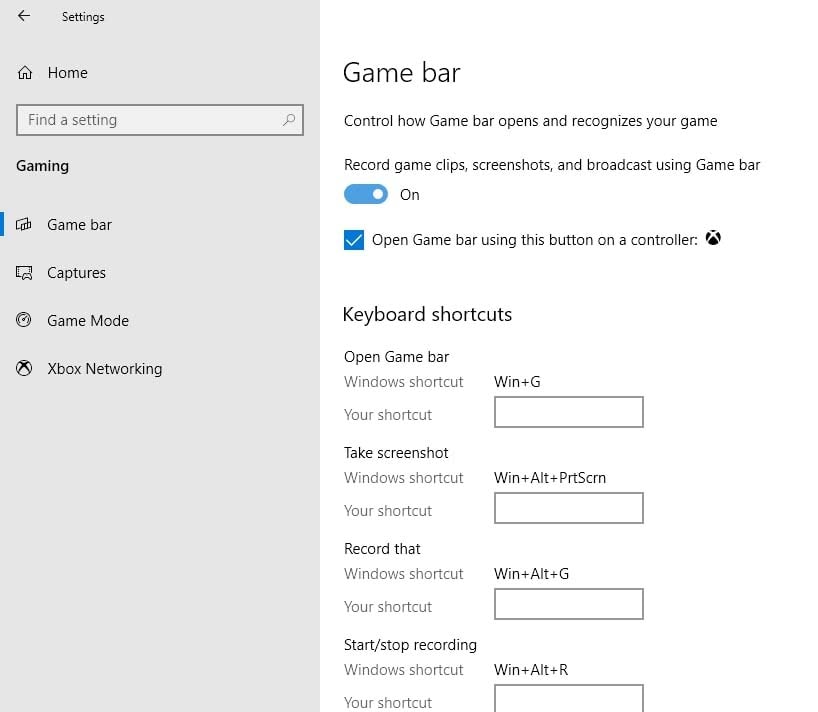 If you would like to record the game in full-screen mode, you can use the "Windows Key + Alt + G" to start and stop the recording as desired.

Once the recording is complete, you have the option to edit the recording as desired. Simply click on the "Xbox" button to open the Xbox app and then click "Captures" to access the recordings.

Please note that in some cases, you may not be able to access the Game Bar using the "Windows Key + G" shortcut on the keyboard. In this case, you just need to enable it in the settings Just go to Settings > Gaming > Game Bar and turn on the switch.

How to Record Games on Windows 10 PC with a Recorder

While the Game Bar can be a good quick solution for Windows 10 game recording, you may need a more professional tool, particularly if you are recording the videos to use for tutorial purposes. One of the best tools to use in this case is Wondershare Democreator. It is a simple to use solution that is ideal for the recording of various types of videos including gameplay, tutorial videos, product reviews, and more.

The fact that it can be used to record the screen at 120 frames per second makes it the ideal tool to record high-action games without losing the quality. The following is a breakdown of some of DemoCreator’s most useful features;

This program is also very easy to use, with features that are accessible to both professional users and beginners. Follow these simple steps to use DemoCreator to record gameplay on your PC;

Begin by downloading and installing the program on your computer. Once installation is complete, open DemoCreator, and in the main window, select "New Recording" to begin the process,

In the next window, you will see a number of options to configure the settings. The following are just some of the options you have;

Here, select "Game" and then choose the game you will be recording, and then select the frame rate to use.

Since we are recording gameplay, it would be a good idea to record the Computer Audio. So, go ahead and set that to "Capture"

If you would like to include commentary with your recording, you should also set "Microphone" to "Capture"

The camera setup may not be relevant when recording gameplay. It is therefore a good idea to leave these settings to default unless you want to use Picture-in-Picture mode to explain parts of the video.

Then when you're ready, click on the red "Record" button to begin recording.

The program will start a 3-second countdown before the actual recording begins.

Popular Games to Play on PC

There is no limit to the number and types of games that you can play on your PC. But the following are some of the most popular;

Raid: Shadow Legends is a fantasy-themed role-playing game that was initially released as a mobile app although it is now also available on the Windows Store. It takes place in a fictional realm known as Telleria, ruled by the Tyrant Dark Lord Siroth. Players try to restore peace and harmony to the realm by taking the role of the resurrected Telerian warrior, whose main goal is to defeat the Dark Lord.

The game gets even more exciting because the player can assemble an army to aid them in their quest. And there are numerous battles set in different locations including Castles, dungeons, deserts, and temples that are heavily defended by the enemy. The game has 12 levels, each level with 7 different stages and can be played in one of three levels of difficulty.

Develop by Lesta Studios, War of Warships is a free-to-play naval warfare themed game that can be played on iOS, Android, Windows, and Mac. Players in the game battle each other at random or form cooperatives to battle other cooperatives. One of the main reasons why this game is so popular is because it is inherently a freemium game, meaning that players can progress in the game without needing to purchase anything or pay for a subscription.

But while the game itself is enjoyable, players will notice that the game gets harder as they progress. This game was made available for Windows in 2015 and there are PlayStation 4 and Xbox One versions as well.

Minecraft is the best-selling video game of all time with more than 200 million copies sold and over 126 million active monthly uses. Develop by Mojang Studios, Minecraft made its debut in 2009, before being fully released in 2011. In the game, players explore a 3D world with infinite terrain where they can find raw materials that can help them craft tools and items to help them build the structure.

Players can also fight mobs and cooperate or compete against other players around the world. There are various modes to choose from including survival mode where players are expected to build the world around them while maintaining their health. Minecraft has received several awards and continues to be one of the most popular games in the market.

The game is a massively popular and freemium game, meaning that you will not need to purchase anything to progress in the game. But there are premium items that you can choose to purchase, although it is not necessary to do so.

Roblox is an online gaming platform that allows players to play for a variety of games created by other users. Released in 2016, the platform has numerous games in multiple genres and languages, ideal for every type of gamer. It is available on all devices including Android, iOS, PC, and Xbox One.

Roblox is completely free to play, although it does come with some in-app purchases available through the in-game currency known as "Robux." The platform has more than 164 million active users.